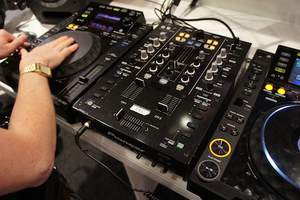 First of all, let's talk about the concept of the DJM-T1. Just imagine that Pioneer combined all the following in a single unit: high-performance two-channel mixer with a crossfader well-suited for scratching, sound card, the latest version of the famous Traktor Scratch Duo 2.0 software, and a Traktor-dedicated controller that allows the user to manage every feature in Traktor, e.g. transport functions, hot cues, effects, samples, etc. In short, you can control Traktor without having to even touch your computer.

Before trying out all DJM-T1 features, I will describe the mixer briefly to then focus on the most interesting part: using Traktor from the dedicated control surface.

After unpacking the mixer you'll feel you hold a serious product in your hands. Anything different would be a surprise coming from Pioneer, who has been demonstrating the quality of its products for several decades. The rather compact dimensions (10.4" x 15.9" x 4.2") of the device are ideal for demanding DJs who like to scratch and do beat juggling. 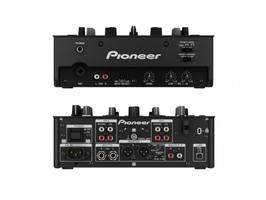 Let's have a look at the front panel and the rear side.

The rear side offers all standard ins/outs: two Master outs on RCA/XLR and one Booth out jack for monitoring. Each channel provides phono/line inputs to connect either turntables or CD players. The rear side is also equipped with a PSU connector and a USB port to connect it directly to a computer.

Pioneer had the brilliant idea of adding an Aux input on the front panel to allow the user to easily connect an additional player. Most of the time, such connectors are on the rear, making access somewhat difficult. Moreover, this input is equipped with volume and EQ controls. On the front panel you'll also find a mic input and a headphones output. The crossfader is equipped with a reverse switch and a curve-control trim. 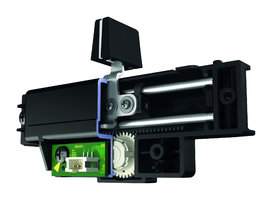 The crossfader on the DJM-T1 has an exclusive Pioneer magnetic construction ensuring extreme durability. It feels smooth enough to allow for an easy scratching. I regret that the two faders don't provide the same quality and smoothness (I find them a bit too hard).

The faders and the crossfader feature Pioneer's P-LOCK fader caps, which will never come off in the middle of a mix (DJs who have already lost their crossfader during a performance know what I mean).

All other features are quite standard: gain controls, 3-band EQ on each channel, headphones section.

But for this review we want to focus on the Traktor control capability, so let's give it a try (for more information about the hardware description visit Pioneer's website).

Reviewing the DJM-T1 also means reviewing the newest Traktor version, considering that the mixer was developed to ease the use of Traktor. I would even say that the DJM-T1 loses most of its appeal when used without Traktor. 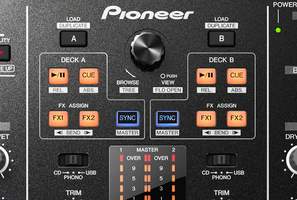 The mixer comes with the Traktor Scratch Duo 2.0 installation CD-Rom plus the Control CD and vinyl allowing you to do some scratching with the selected tracks.

All elements on the control surface are organized very cleverly: you can browse the whole library using the encoder on the top of the front panel and assign the selected track to one of the two decks using the LED A and LED B buttons. 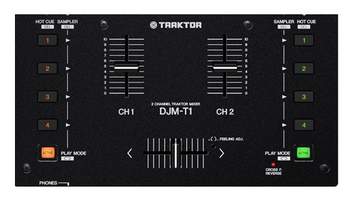 You have the possibility of controlling all eight hot cues (four per deck) by simply pressing the dedicated key, and to trigger loops or sounds thanks to the the sampler in the new Traktor version.

The DJM-T1 allows you to control all six effects in the software as well. You'll find all Pioneer classic effects like flanger, delay, reverb...

But the main innovation of Native Instruments' new software version is the possibility to use a sampler besides the decks. This way, you can play up to four samples per deck at the same time, which means a total of eight simultaneous loops or samples and an almost endless number of new possibilities for your mixes. 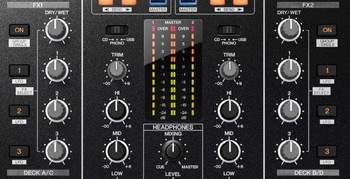 Last but not least, Pioneer also included a pair of play/stop buttons that can become useful in case the deck stops working.

The Quantize key in the upper left corner works like a small magic wand: it changes the tempo of all loops, samples and effects so that they match the BPM of the currently played track.

The Sync keys above the meters allow you to match the tempo of both songs without having to adjust the pitch of the deck. However, be careful not to overuse this function because you might end up having a hard time mixing two songs properly when you use a different mixer in a club. 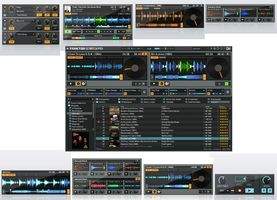 Finally, the Shift key is like the one on those old hand calculators that gives you access to the additional functions of some buttons. For example, to delete a hot cue, just press Shift and the key of the cue point you wish to suppress.

As a summary, everything you can do with the software can be controlled from the mixer. You can sample in real time and play the sample back immediately. You can combine all three effects at the same time and trigger up to eight loops simultaneously. In short, your creativity is the only limit.

For Whom and For How Much?

The rather high price of the DJM-T1 (approx. $1,600) makes it a product mainly for professional DJs. But don't forget that it isn't only a simple mixer: this tool combines a top-notch sound card with a Traktor-dedicated controller, and it includes a software that costs somewhere around $500. So the price is definitely justified, even if most beginners might prefer a less expensive system.

To say it more precisely, I think this mixer is targeted to skilled DJs. It's the ideal tool to create many different scratching and beat-juggling routines.

DJs using different DJing techniques will almost immediately feel comfortable with this mixer. And the hardware's very well thought out design allows you to take the best out of Traktor. I'm walking proof of that, considering that I didn't know the software at all (I use a Serato system), but I could control it perfectly after only one hour.

Finally, since the mixer is fully dedicated to Traktor, I recommend it to DJs who already use Native Instruments' program or want to work with it. Otherwise, the mixer loses its appeal.

With the DJM-T1, Pioneer strikes a decisive blow in the market of DJ mixers/software controllers. This mixer is a serious competitor, especially for Rane's TTM57 SL, which works with Serato.

With a sleek and sexy product, Pioneer meets its goal and allows us to fully benefit from the Traktor Scratch Duo 2.0 new features. Everything is useful in this mixer. All controls are exactly where DJs want and expect them to be. The DJM-T1 is almost perfect!