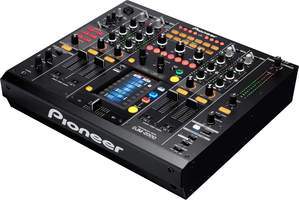 I put on my prettiest sneakers, grab my good old CDJ-100 CD players (yes, I know, they are not as nice as the CDJ-2000...), a small Shure mic, my MacBook, a pair of headphones, a Sennheiser mic, and a fat RCF sound system to shake the ground under my feet. I am now ready to welcome the new Pioneer jewel... The picture on the box doesn't look very attractive, but as soon as you open the box, you know that you have a serious mixer in your hands: 18.7 lbs of technology in a rather big housing (15.7" x 16.9"). The package also includes 28 pages of operating instructions (the bare minimum, considering the device), a CD-ROM with PC and Mac drivers for the sound card, the power cable, a USB cable, and four rather unusual RJ45 Cat5e cables for DJ equipment. We will come back to this later...

It doesn't include any software, but on Pioneer's website you can download Rekordbox for free — like I did. Installation was a breeze with my Mac Book Pro but the software was quite useless for this review: it cannot read more than one channel simultaneously and it is quite limited if you have no CDJ-2000/900. 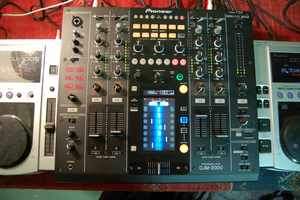 Pioneer tried to pack as many technological innovations as possible into this new high-grade mixer. Some of them have been inherited from other products. With this mixer, Pioneer successfully implemented into a hardware product some unique features that you usually find only in computer software. The mixer is very well manufactured. It has a very nice and professional finish, pursuing the spirit of previous Pioneer products, especially through the classic level meters with peak indicators. Almost every button is backlit, some of them flash to show their status while others have different lighting intensity. We just miss the possibility to adjust their brightness more precisely.

You obviously have a headphones output to monitor all channels and effects, a mic input with a two-band EQ and talk-over (that attenuates the level of the master signal when the mic level increases), and a master zone with stereo meter that allows you to adjust the output volume and balance. We won't spend much time describing these features since they are quite standard on mixers in this range.

Instead, we'll focus on the four channels and their multi-inputs, the great crossfaders, numerous effects, and the sound card that make this mixer one of the most versatile in its category.

The four channels are placed to the sides of the center LCD. You can use the outer channels (1 & 4) to connect your turntables and the inner channels (2 & 3) for your favorite analog players. Each channel features an S/PDIF input and another digital input through the internal USB sound card.

Each channel has exactly the same features:

The mixer has eight crossfaders:

On the lower side of the mixer you'll find a quite standard and very smooth croosfader. It can be removed and replaced but it seems that its resistance cannot be adjusted.

Each voice can be assigned to the right or left side of this crossfader. You can also choose between three attenuation curves: a very steep one (almost on/off), a very linear one and a third curve somewhere between the other two.

There's not only one or two but seven(!) additional crossfaders: they are based on the separation of the songs being played into several frequency ranges. True, the mixer is big, but how the heck did they manage to pack seven additional crossfaders on it? Enter LCD touchscreen... Its multitouch technology allows you to use two crossfaders at the same time. To be honest, I was impressed by the ease of use! As soon as you test them, you won't be able to work without them. They offer virtually endless possibilities to create always different mixes based on the same two songs. The two small buttons to the left and right sides of the crossfaders allow you to jump instantly to the end. You can certainly choose the associated left and right channels via two drop-down menus on the top of the LCD.

And how do I access these crossfaders? Simply press the Mix button to make them appear on the LCD. A small but important detail: you must push the ON/OFF button on the left side of the LCD to activate them in the live bus. It takes time getting used to, and I personally would rather have them activate by default.

No less than six effects are instantly available. Simply select one and adjust the level independently for each channel. The downturn is that the same effect will always be assigned to all four channels and it is impossible to assign different effects to the channels. 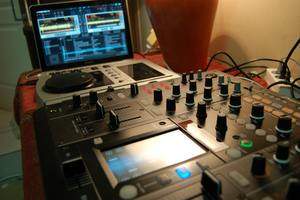 Pioneer belongs to the... pioneers when it comes to BPM synced effects. Their mixers have included such effects for a long time. First select the channel that has to be processed by the effect: 1, 2, 3, 4, mic, A or B crossfader, master. Unlike the standard effects (called INST FX), you can select only one channel. BPM is calculated automatically but you can also set the value manually using the TAP button (just hit the button several times to set the BPM value... very practical!). The disappointing part is that the BPM is rather slow (about 10 sec.) and it is sometimes not very reliable, compared to the accurate software tools available for computers. The Time button allows you to sync the effect to the tempo very precisely: seven buttons give you direct access to presets between 1/8 and four times the tempo.

The effect can act on the full frequency spectrum or only on a given frequency range thanks to three "Effect frequency" controls. Last but not least, a Level control allows you to adjust the effect level in the selected channel.

Finally, press the ON/OFF button to assign the effect to the master or to the headphones pre-listening bus with the Cue button (extremely convenient to monitor the effect before assigning it to the live bus). You get 11 different effects to embellish your mixes: some of them are rather standard (delay, gate, echo, reverb, filter, phaser), but you also get some others that deserve special attention:

A small disappointment for me is that I am a big fan of the DJM500 auto-pan effect (ping-pong synced to the BPM), which disappeared in this version! Sigh...

To access these effects push the remix button near the LCD. Do note that they are not accessible when all seven crossfaders are assigned to the live bus. If you read the review of the MAGIX Digital DJ software (a Deckadance repack), this effect is quite close to the "magic dial" function. Here you can vary simultaneously two parameters of the same effect using a kind of dial where you can slide your finger from top to bottom or from left to right.

A special menu allows you to apply the effect to a specific frequency band (lows, mids, highs). You can assign seven effects to this dial: four oscillators, a sampler, a pitch, and a gate. It is very intuitive and the results are excellent: another asset of the mixer. Like with the beat effects, you can monitor the effect in the headphones before assigning it to the live bus with the ON/OFF button.

The quality of the internal sound card is good. The drivers were installed after rebooting my Mac and they allowed me to connect a four-channel Traktor PRO without a sweat.

The BPM-synced MIDI output of the mixer allows you to control external sequencers or software programs. However, the DJM-2000 is not Traktor ready and you'll have to be careful if you want to scratch with the sound card or to control Traktor with the faders and rotary controls. In fact, if you enable MIDI on the DJM-2000, the MIDI will be transferred via the USB port but it will lead to some weird behaviors in Traktor. We'll have to wait for a configuration file to solve the problem. It's a pity because the CDJ-400/900/2000 are all Traktor ready, but not the DJM-2000. Upcoming for sure! 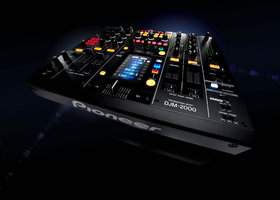 This new feature alone would be worth a full test. A small drawback for limited budgets is that, for now, it works only with the CDJ-2000 and CDJ-900. This function allows you to connect all CD players with network cables. You can also add one or several computers to the network (after you install the RekordBox software) and you're done: all tracks available in one of the various components in the network are visible in all others.

For example, if you have a Michael Jackson song in your computer you can transfer it to any of your four CDJ-2000 (nice setup!). Or, if a friend brings you his favorite hit as an awful-sounding MP3 file on his USB key, you just have to plug it to one of your CDJ-2000s and all others will have the possibility to access it. Nice isn't it? Unfortunately, I don't have such a setup so I cannot tell you anything else for the time being... The RekordBox software will also allow you to prepare and save your performances setting loops and Cue points.

For Whom and at What Price?

You'll have to pay approximately $2,500 for this mixer to sit all alone on top of your desk without a pair of CD players or turntables. Do notice that the mixer provides only one BPM counter so you won't have the possibility to sync tracks with each other (older mixers like the DJM-500 offered this possibility, which makes it easier to sync tracks). The target users are clearly professional DJ's who need the best tools to perform in clubs. It could appeal to more users if the mixer was Traktor ready, or if it was sold with an alternate software tool with four output channels. Users on a limited budget will certainly choose other Pioneer products or even mixers from competitor manufacturers providing less features.

Let's be clear: this is a great piece of gear! Well thought-out, nicely finished and with a great sound, it offers countless possibilities to allow the most demanding DJ's to have endless fun. This definitively high-grade mixer was conceived by Pioneer to work with several CDJ-2000 or CDJ-900. If you want to get the most out of it, you'll have to buy them as well.

And this results in the biggest problem for most of us: the basic setup (DJM-2000 + two CDJ-900) would amount to about $5,100... it's hardly what you'd call cheap! With this product, Pioneer targets night clubs with big budgets who want to offer the best to their DJ's. The latter will have the possibility to prepare their sets before performing, and to come to the club with only a CD or a USB key — no need for a computer.