The first thing that strikes you as soon as you take them out of the box is their size. Even though they sport a 5.7" woofer, they are nevertheless much more compact than the other 5" speakers we usually receive: They measure in at 6.7” x 10.2” x 8.3” (260 x 170 x 235 mm) and weigh 11.9 lbs (5,4 kg)! Another pleasant surprise ─ which really isn't one if you're already familiar with Dynaudio ─ is the build quality. They are made in Denmark, are sturdy, and  are free of any excesses, making a serious impression. Their look is decidedly Dynaudio, either you like them or you don't, but they remain classic and pragmatic. The third unexpected surprise is the presence of an IsoAcoustics stand (perfectly matched to the size of the speakers) inside each of the speaker boxes. The stands allow you to isolate the speakers from the surface on which they are placed (a desk, for instance) and absorb the vibrations that are transmitted to the surface. The stands have the added advantage that they can be tilted, so you can angle the speakers towards your ears, which is strongly recommended.

The housing contains a 5.7" woofer, a 1.1" soft dome tweeter and 2x50W Class D amplifiers (the crossover frequency is set at 2.1 kHz). On the rear panel you can see the Bass Reflex port, which poses no problems provided you don't put the speakers directly against the wall (and if you do, you'll have a hard time with the cables, anyway). In terms of inputs, there's an XLR and an RCA connector, no jack. A mini-jack is available to connect the beautiful remote control, which unfortunately is only available as a $90 add-on. This remote adjusts the volume of the built-in amps, not the input sensitivity, a very good point. To adjust the sensitivity, you have a 3-way switch: -10dB, 0dB or +4dB. The On/Off button indicates there's a Sleep (stand-by) mode, which is a handy feature. If the speakers don't receive any signal for 20 minutes, they switch to sleep mode and wake up again in two seconds.

The controls are very comprehensive and feature a low-cut at 60 Hz or 80 Hz in case you ever use a subwoofer, two shelving filters for the low and high frequencies (±2 dB at 150 Hz and ±1 dB at 1.5 kHz) and a notch filter to attenuate 2 dB or 4 dB at 450 Hz in order to compensate for the acoustic effect of a mixing console. The amplification section seems to be identical to the one found on the DBM50s, which we tested a while back.

It's time to lend them an ear.

To test the speakers, we compared them to our sE Electronics EGG, which are admittedly more expensive and have a 6.5" woofer, but will nevertheless allow us to pinpoint more easily the strengths and weaknesses of the BM Compact mkIII. We used uncompressed files and our Metric Halo ULN-8 interface. A switch allowed us to toggle easily between speakers. 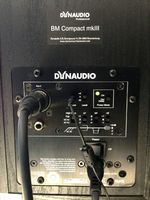 Both pairs of speakers are very similar when it comes to the vocals, with a more nasal touch on the EGG and a more natural feel on the Dynaudio. What's more, the EGG seem to have a more mid-scooped sound. It's harder to distinguish them on the guitars. But we must admit that both sets of speakers do a very good job... In terms of transients, both seem equivalent and perform nicely. It's a real pleasure to listen to this mini-Dynaudio.

As soon as the bass drum kicks in, the bottom end of the EGGs stands out due to the size of the woofer. It's obvious that the Dynaudios have a hard time reproducing the instrument's resonance, which is normal for speakers of their size. They cut off relatively high (the sound decreases steeply at 70 Hz), but everything above that is very intelligible and clean. Music dynamics are respected, the lows are dry and do not muddle the rest of the audio spectrum, which is a very good sign. The stereo image is also very well reproduced, nothing to add in this regard. When it comes to the vocals, it's hard to choose a winner, since both speakers manage very well. The Dynaudios seem perfectly flat and even make the EGGs seem somewhat mid-scooped. In any case, we like the Dynaudios for their sonic balance. 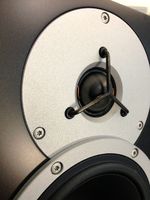 Once again the "physical" lows, which you can feel with your body, are hard to get with the Dynaudios, which is quite normal. However the Dynaudios reproduce the vocals and the minute details present throughout the song, perfectly. The lows are cut at 70 Hz, but the kick comes through fine and doesn't disappear. Apart from the extreme lows, both speaker pairs are very similar. Do remember that the designer behind the EGGs used to worked at Dynaudio, so it's easy to recognize the same style. You can feel that the small bumps and dips aren't exactly in the same places on both speakers, but nothing that allows us to pick a winner.

The Raconteurs - Consoler of the lonely

Given the vintage character of the drums but the terribly modern overall sound, the fullness of the kick and the bass are even more difficult to hear with the Dynaudio, but they are there. The distorted guitars, which are usually a good way to hear the high mids of a speaker, are very similar. Nevertheless, the Dynaudios maintain a slightly more natural character, while the EGGs seem more calculated. 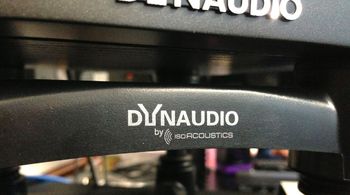 We'll finish with this classical music recording. It's impossible to tell any difference on the kettledrums, which is a very good sign for Dynaudio. And the same happens with the space, which is reproduced comparably on both. Some brasses on the right do stand out better with the Dynaudios, though, and they get a bit buried in the mix when we switch to the EGG.

To sum it up, there's not much to criticize these speakers for: They are well-balanced and detailed. They don't go too deep, but that's understandable. You couldn't ask for more from a small pair of monitors. They are not cheap (a pair costs about $1000) and the price difference between them and the BM5 mkIII is not that big, but they do deliver on their promise of build quality and sound.

Dynaudio offers a compact but consistent variation of their BM! They have all the qualities that have made the Danish brand so renowned. Namely, an irreproachable manufacturing quality (made in Denmark) and a precise, well-balanced sound. The lows are inevitably limited, but they are there, and the isoAcoustics stands enhance the speakers nicely, both in acoustic and practical terms. The automatic stand-by mode is very pragmatic and the only con is the remote, which could've been included in the price. The cost of becoming part of the happy Dynaudio owners club is high...but the quality speaks for itself.