New name, new finish... what else is new? At first glance it's easy to recognize the silk dome tweeter protected by the brand's unique tripod, as well as the woofer's characteristic design. If it weren't for the white finish, you could be tricked into thinking that you are in front of the BM mkIII (which I really liked). But before calling it a blunt marketing prank, let's look deeper into the LYD 7s rocking on top of the speakers stands.

The LYDs clearly resemble the old BM mkIII, which is a good thing from the point of view of the speaker construction. The LYDs seem sturdy and the sound produced when you tap on them is dry and short. No vibrations to regret! The tweeter is a 28 mm soft dome tweeter with an aluminum moving coil. The woofer is 7" big and made of MSP (Magnesium Silicate Polymer). It also features an aluminum voice coil and a flat cone, lodged in an aluminum basket. The speakers are rather compact (186 x 320 x 296 mm), just slightly less tall and wide than the ADAM A7Xs; and they weigh 8 kg.

Inside you'll find two 50-watt class D amps with the crossover frequency set at 4.3 kHz. On the rear you'll see two connectors: XLR and RCA, plus a 3-way switch to adjust the input sensitivity (-6/0/+6 dB) and a standby mode to put the speaker to rest whenever there's no input signal present for a given period. Something I noticed is that it takes a bit too long for the speakers to wake up from standby mode. Finally, three switches allow you to adapt the frequency response to your room. The first one corresponds to the low end and features three positions (-10/0/+10 Hz). This basically means you can either have a pair of monitors that reach down lower but with less power or which don't reach that low but have more power. For this review I set it to -10 Hz, in order to have the low end as extended as possible. since the power was more than enough already. The second switch is a Tilt filter to either emphasize the lows and reduce the highs or vice versa. I left it in Neutral position. The last switch, called Position, allows the speaker to compensate the acoustic amplification (especially in the low end) when placed close to a wall (less than 50 cm/1.6 feet away from it) Also note that the bass reflex port is on the rear, so you should try not to place the speakers against a wall. Although if you want to connect any cables to the speakers you'll have to leave some room on the rear anyway! 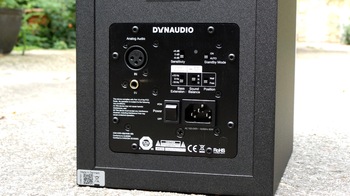 I do miss the three-band EQ of the BM mkIII though, because it is more flexible especially in the mids. However, I must admit that the settings of the LYDs are more friendly to beginners. It's also a pity that the optional mini-jack for the remote has disappeared, particularly for those whose audio interface doesn't have a volume knob. Furthermore, the isoAcoustics stands included with the BM mkIII are nowhere to be found. So you should include them (or something similar) in your budget.

The manual is well done and gives you some pointers regarding the placement of the speakers. Plus, you can also download a Dynaudio mobile app to make some measurements and optimize the settings of the speakers according on your room. The app is free and includes a real-time spectrum analyzer and a sound level meter. Get it!

Okay, the time has come to compare the LYD 7s with the ADAM A7Xs which also feature a 7" woofer and sell for a similar price (around $700 per unit). They sure make for a good comparison! 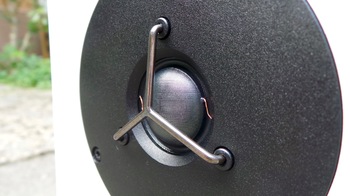 On this song by Johnny Cash, the ADAMs seem more mid-scooped, making the vocals a bit more ghostly, less present. If you were to split the vocals in three parts, body, nose and sibilance, the nose is clearly weaker on the ADAMs, while the Dynaudios sound more "in your face" with the vocals right at the center and more distinct. The acoustic guitar sounds pretty similar on both sets of speakers, but the ADAMs do seem to reach down deeper with the low end of the piano. The stereo image and sweet spot is very much alike, and the dynamics appear to be just as faithful on both. On this song I prefer the Dynaudios because they sound smoother, most notably on the mids between 700 Hz and 3 kHz. The sound is mid-scooped and less well-defined when you go from the LYD7s to the A7Xs.

On the introduction's synth pad it's clear that the high end of the Dynaudios is better developed. Everything beyond 10 kHz has a bit more "air" and the hi-mids (2/3 kHz) have more presence. When the bass drum and bass kick in, the ADAMs demonstrate once again that they have a more extended low end, despite the fact that the Dynaudio are set to -10 Hz (which makes them reach deeper). Regarding the vocals, it's pretty much the same as with the Johnny Cash track: they sound more sibilant on the ADAMs and more nasal on the Dynaudios. The overall balance between the vocals and the rest of the song is better on the Dynaudios, which highlights the mid-scooped sound of their rivals. 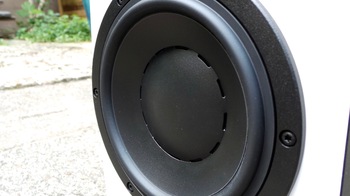 To finish, a song that puts the focus on the low end of the spectrum. The ADAM A7Xs go easily down to 50/60 Hz while the Dynaudios only reach 60/70 Hz. Nevertheless, I really like the dry aspect of the LYD7s, with a kick and a bass that never seem to drag. Less so with the A7Xs. The telephone-like voices also reveal a lot about the hi-mids, signaling a much more uneven response on the ADAMs (between 700 Hz and 1.5 kHz) besides being, in my opinion, a bit weaker. While I regret that the Dynaudios don't go deeper, I must admit that what they do they do really good. They really excel at it.

The near-field monitors of the Danish manufacturer are back with a new name and finish, although they do bear a resemblance to the old BM series. The build quality is the same and they have preserved the overall balance that makes them a reliable bet for home studios. While the settings on the rear are very beginner-friendly (more or less brilliance, close to a wall or not, more lows or more power), it's a pity that the settings for the mids are gone. The same applies to the remote connector and the isoAcoustics stands. Fortunately, the audio performance is still excellent, and that's what really matters!