Surfing on a Rokit

A December afternoon in the AudioFanzine office:

- Good, we were waiting for you. Please put the package in the kitchen, next to the stove.

- Isn't that a bit awkward?

- Why, if I may ask? A fridge is usually placed in the kitchen!

- I think you're mistaken, this is not a fridge, but the KRK Rokit 10-3 speakers!

- Oh! When I saw the size of the package, I thought you were delivering the fridge. Do you want a drink?

Sorry, we have to interrupt the story here and go back to the new KRK speakers. The Rokit 10-3 are huge! Considering their 46.3 lbs, we had to double-check if our monitor stands could withstand the load. It measures 21.2" 12.7" x 14.3", and you can setup the speakers horizontally or vertically depending on your room. The speakers have the typical KRK look with two yellow-cone speakers — 4" aramid-glass composite midrange and 10" aramid-glass composite woofer. The monitor also features a soft-dome tweeter and a back-lit logo that indicates the speaker is on. The monitor has the exact same design as the other Rokit speakers, which constitute the budget series in KRK's product range. In fact, in spite of the three-way design, the 10-3 are very affordable: $500! Few manufacturers offer three-way systems in this price category and we hail KRK's initiative. 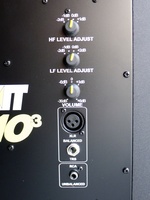 The rear panel offers no surprises: you get a pair of shelf filters to adjust both high and low-frequency ranges (+/-2dB @ 300Hz and -2/+1dB @ 5kHz). The speakers also feature a sub-filter (30Hz) and a volume control (-30/+6dB). The bass port is placed on the rear panel, which is a good thing, even if the manufacturer recommends to place the speakers at least 3 ft away from the nearest wall. The connections are comprehensive enough: balanced XLR and 1/4" jacks plus an unbalanced RCA input. Unfortunately, the power switch is placed on the rear panel, as is generally the case with most budget monitor speakers.

The 10-3 are real three-way active monitors with three class AB amps: 80 watts for the woofer, 2x30 watts for both the midrange and the tweeter. The crossover frequencies are set to 350Hz and 3.5kHz.

The Rokit 10-3 are mid-field monitors, which means they should be set up at least 5 ft from the ears of the listener, and not farther than 13 ft. But the manufacturer mentions that the speakers can also be used as near-field monitors, which means they can be placed between 3 ft. and 5 ft. from the listener. However, if you want to use them for near-filed applications, it is recommended to set them up horizontally and to rotate the tweeter/mids section 90°. To do this, just unscrew the front panel and turn the tweeter/midrange baffle so that the tweeter is above the midrange with the woofer toward the outside. For mid-field applications, you can set up the speakers both vertically or horizontally (with the tweeter toward the outside). Just make sure that your ears are at the same height as the center point between the tweeter and the midrange driver.

Everything is set up and connected, so let's listen to the speakers!

It wasn't easy to decide which speakers to use to compare them directly with the Rokit 10-3. Three-way monitors with a 10" woofer for $500 are very rare! That's why we decided to compare them with our ADAM A7X monitors, which have only one thing in common with the Rokit 10-3: the price! Our listening session was very interesting and allowed us to point out pros and cons of both models. 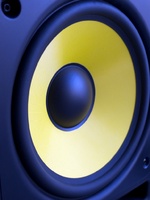 Let's start with a Johnny Cash tune mixed by Rick Rubin. Cash's acoustic guitar (a Martin) sounds brighter with the KRKs due to a boost at 6kHz, just above the crossover frequency, which causes a slight but audible attenuation at 3.5kHz. With the ADAMs, we noticed a boost at 1.5kHz giving the instrument a bit more presence. Cash's voice sounds more nasal with the KRKs and has more fullness with the ADAMs. In spite of their much smaller dimensions, the ADAMs seem to have a fuller bass-frequency response. In fact, the A7X tend to emphasize the signal around 70-80Hz, which was deceptive in the beginning. Below this frequency, you'll hear nothing at all on the ADAMs while the KRKs reach frequencies down to 30Hz. When it comes to dynamics, both speakers are very close and give very good results.

What a deep bass! At first we were surprised because the ADAMs seemed to produce more low-end than the KRK, due to their boost at 80Hz. In fact, we noticed later that the KRKs can reproduce lower frequencies (which is normal) and that the bass drum is not cloaked by the bass. Generally speaking, the low-frequency response is clearer on the KRKs while the ADAMs try to make more than physically possible. The sound of the A7X seems to be swollen and imprecise while the Rokit reproduce details more clearly. There is no secret here: the 10" woofer beats the 6.5" driver, not only with regard to loudness but especially to sound precision. 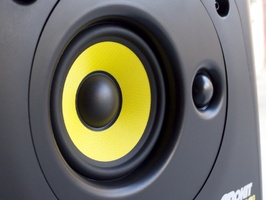 With this song, we clearly heard the 6kHz boost of the KRKs, giving the impression that the sound is more open than with the ADAMs. We found the Rokit sound a bit too sharp in the high-frequency range (especially with vocals) so we recommend you to attenuate the high-end a bit using the high-shelf filter. Once again, the low-end seems to boom more and to be wider with the ADAMs, which is really impressive considering the diameter of the driver, but it masks a bit the other frequency ranges. All the details you can hear with the ADAMs are also audible with the KRKs.

Lou Reed -  Walk on the wild side

The guitar on the right side of the stereo field sounds brighter with the KRKs (with flat settings) and the attack of the pick is more easily audible. The same applies to the bass drum, whose beater attack is more present but lacks resonance with regard to the ADAMs. Like on all other songs, vocals sound more nasal on the KRKs.

The double-bass is less obvious with the Rokit, but every note is clearly audible. The disadvantage of the A7X is that they want to sound bigger than they are. The ride cymbal is slightly emphasized on the KRKs. 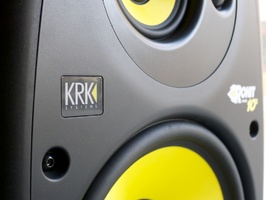 Our comparison was surprising: the ADAMs seem to produce more low-end thanks to the 80Hz boost. However, their frequency spectrum can't reach as low as the KRKs, which is normal considering the diameter of their respective woofers. We were surprised that the Rokit didn't emphasize the low-end a bit more. And finally, this is a good thing because their low-frequency response doesn't sound swollen and it doesn't mask higher frequency ranges. Moreover, the KRKs do reach down to 30Hz, as stated by the manufacturer. On the other hand, we regret the attenuation at 3.5kHz, which is certainly due to the crossover between the tweeter and the midrange, as well as the 6kHz boost (that you can attenuate a bit using the control on the rear panel).

Three-way studio speakers with a 10" woofer for $500 — very rare! This KRKs are designed for people who want a speaker reaching low frequencies down to 30Hz and have enough space in their home studio to set them up properly. Faultless look and sturdiness: the manufacturer has proven its skills in the past. We like the comprehensive connectivity and the rotatable tweeter/midrange baffle that allows you to set up the speakers either horizontally or vertically. As for sound, we were surprised by the low-frequency response, which we expected to be more emphasized due to the 10" woofer. In fact, the response stays flat and authentic. The only disadvantage is the uneven high-frequency range including an attenuation at 3.5kHz and a boost at 6kHz. However, you can partly solve the problem with the high-shelf filter on the rear panel. For $500, the KRK Rokit 10-3 are definitely an appealing product. Just make sure your monitor stands can withstand such a load and watch out for backaches when you set them up!