If the Eris had a fairly classic design, the Sceptres feature a relatively original coaxial concept and a look that won't go unnoticed. Behind it is a company — Fulcrum Acoustic — specialized in the design of PA speakers, some of which also feature a coaxial design and whose Lead Product Designer, David Gunness earned his name at Electro-Voice and Eastern Acoustic Works (EAW). He also has quite a few patents to his name due to his inventions. His hobby is to improve the performance of speakers making use of algorithms, DSP and software tools. The Sceptre are thus an adaptation of his made-in-Fulcrum-Acoustic technologies for the home studio. Among them we find one called "TQ Temporal Equalization," but before going into that let's have an overview of the product. 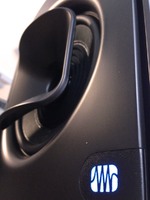 The Sceptres have a very original look thanks to their coaxial design. In fact, the tweeter (a 1-inch HF transducer) is embedded into the horn, on the same axis as the woofer. The main advantage of this design is that it offers a single point source, whereas the classic two-way speakers in our home studios offer two (since the tweeter and the woofer are separated). In theory, the fact that both drivers share the same axis allows them to have a symmetrical frequency response, both vertically and horizontally, and a crossover filter that is inaudible at any given angle. Let's see how that translates into praxis...

The fact that the tweeter is embedded into the woofer allows the monitors to have reduced dimensions for a speaker featuring a 6.5" woofer (paper and fiberglass): 9" x 12.2" x 13.2" (230 x 280 x 335 mm) and 18.8 lbs (8.53 kg). The cabinet is made of vinyl-laminated MDF, and underneath the woofer/tweeter is a bass-reflex port. Juts like the Eris, the Presonus logo illuminates when the speakers are powered on.

On the rear we have the inputs (XLR and TRS jacks) and an input level control (with a non-detented unity gain knob, unfortunately). The power switch is also on the back (pity), and the three acoustic adjustment controls are very easy to use thanks to their LEDs and button. 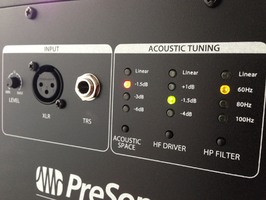 We have a (switchable) high-pass filter that can be set to 60 Hz, 80 Hz or 100 Hz, a high frequency correction control that affects all frequencies reproduced by the tweeter and thus above 2.2 kHz (+1, -1.5 or -4 dB). And finally we have the so-called "Acoustic Space" control that reduces all frequencies below 250 Hz (1.5, 3 or 6 dB) in order to compensate for the acoustic amplification of the low frequencies when the speakers are place against a wall or in a corner of the room. That's all regarding settings, which means it is impossible to modify the mid frequencies independently from the highs, hopefully that won't be too annoying in practice. Both class D integrated amps have a rating of 90 W (at 4 ohms for the lows and 10 ohms for the highs).

While coaxial speakers provide some advantages, the system induces certain problems that can't be solved with a simple acoustic solution. And that's where Fulcrum Acoustic's know-how comes into play, especially their TQ Temporal Equalization. This algorithm uses FIR (Finite Impulse Response) filters in order to eliminate horn reflections and other (frequency and time related) anomalies. According to Fulcrum, this combination provides a better stereo image and element separation in a mix, more depth, less ear fatigue, and a better resistance to feedback.

Good, we only have to listen to the speakers now!

For the listening test, we compared the Sceptre S6 with another pair of 6.5" speakers, sE Electronics' The EGG, which are more expensive but will be a good reference point because we are pretty familiar with them. We listened to songs that we know pretty well (in lossless quality and some even at 96 kHz/24 bits) via our Metric Halo ULN-8 audio interface. We started with the settings on the rear of the Sceptres in neutral position. 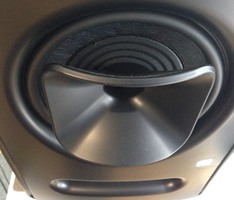 The first thing that caught our ear was the Sceptres' mid highs that provide more presence than the EGGs, and their balance in relation to the highs results in a more boxy sound making the reverbs and the ambiance less distinguishable than on the EGGs. We will need to be careful not to add too much reverb when mixing because the Sceptres tend to attenuate it. The low end of the spectrum is similar and seems very good for 6.5" speakers. The fact that several frequencies between 2.5 and 5 kHz are clearly boosted on the Sceptres makes the sound more analytical, almost aggressive at times.

The vocals are well upfront, but we will need to be careful with long listening sessions. We can attenuate the frequencies above 2.2 kHz thanks to a setting on the rear of the speaker, but that won't change the balance between high mids and highs, nor the overall reverb and air perception. The low mids aren't as linear as on the EGGs, but that's no surprise given the price difference between the speakers (the Sceptre S6 cost around $1300/pair and the EGG $2500/pair). The stereo image seems good, as do the overall dynamics of the song that translate pretty well. The sweet spot is pretty wide, but a bit less than with the EGGs, with slight timbre variations when we move the head horizontally.

The bump in the high mids gives the electric guitars more presence on the Sceptres, making the EGGs seem hollow. The difference is flagrant. The hi-hat is also very different, tending towards aggressiveness on the PreSonus due to the high mids. Some will find them tiring during long sessions. In return, the Sceptres are more accurate and it's hard to miss any detail of the mix, even if the balance between high mids and highs provides a boxy character to the overall sound. On this song, the Sceptres come out pretty good, with a different balance than the EGGs, more presence and a good accuracy. Nothing to say about the low end.

The Sceptres' high mids are flattering to the brasses, providing them with a good presence, while the instruments can be easily distinguished. On the other hand, the space is tinier, the instruments seem closer to us, surely due to the balance between high mids and highs which we have mentioned above. The Sceptres do the job, but you must be wary of the reverbs' volume when mixing because you might end up adding too much of it.

The Sceptres have a very particular balance in the high end of the spectrum, which guarantees a good presence and some accuracy on the attacks, but its emphasized high mids can give the impression that the high frequencies provide space and air to the instruments, while the reverbs are attenuated. They are very present though: it's all a matter of balance and you will need to get used to it while mixing with the Sceptres, at the risk of adding too much reverb to your productions. In the end, all speakers require some time to adapt to them. While the lows are outstanding for speakers this big and in such a price range (around $650 per speaker), the low mids are less linear than on our (more expensive) standard speakers.

Their look, coaxial design and low end, as well as their good accuracy and presence in the high mids, are very convincing, but it takes time to get used to the balance of the latter with regard to the highs, which results in a tendency to attenuate the reverbs and the air of the mixes we listened to. Moreover, while we really love their accuracy in the high mids, people who are more sensible to ear fatigue must be warned, since these Spectres can seem slightly irritating during long mixing sessions. Once tamed, these Sceptre S6 might prove to be very good working tools.