Members' Choice: Audio & Musical Gear that Made the Show

There had to be a revival for the Korg 50th anniversay, and the japanese brand chose the 1978 MS-20 synthesizer to continue the legacy. Korg explain that the same engineers who developped the first MS-20 faithfully reproduced the circuits in the MS-20 Mini, with a physical size reduced to 86% of the original size, but without changing the traditional and timeless look of the model.

The Moog Sub Phatty combines classic real time sound design features with new ones, and in particular a Multidrive section that adds warmth or grit depending on how you push it, or a mixer section with a subs-oscillator that outputs a square wave one octave below the OSC 1.

As part as their 50th anniversary, Korg launched the KingKORG analog modeling synthesizer equipped with practical controls for the sound design.

32 years after the first synth, Dave Smith relaunched at NAMM 2013 the Prophet in a 12 voice polyphony version.  With a 5-octave keyboard, the Prophet 12 boasts a 12 voice polyphony. Each voice features four oscillators capable of generating classic and complex waveforms, a sub-oscillator, resonant analog low- and high-pass filters, and analog VCAs. 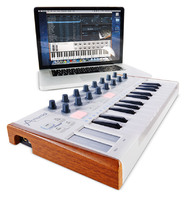 Marshall will launch in February a new Pin Up limited series, with one 5W valve head and three customized cabinets called Jane, Betty and Greta.  The Marshall Pin Up CSC5H is a 5W Class A guitar amplifier head that hosts two ECC83 preamp valves and one EL84 power valve. Controls include a volume and a three-band equalizer. One headphone output and two cab outputs for the Pin Up cabs, with 8 or 16 Ohm impedance are included.

Behringer expands the X32 mixer series with the Compact, Producer, Rack and Core models.  All models include KLARK TEKNIK-engineered AES50 ports, which can be connected to Behringer S16 Digital Snakes for expanded I/O regardless of mainframe size, and can be controlled using XControl for PC/Mac/Linux, XiControl optimized for iPad and XiQ for iPhone/iPod Touch.

Using a standard SD card, users can load virtually any sample onto the MPX8 and then assign it to any of the unit's eight backlit velocity- and pressure-sensitive pads. MPX8 also comes with a large library of standard samples built in, which can be used for live performance or in studio.  The MPX8 comes with a drag-and-drop sample editor for Mac and PC for easy sample conversion. 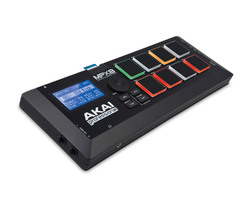 The Epitome digital multi-effect pedal combines the polyphonic tracking of the Micro POG octaver, the stereo flanger and chorus of the Stereo Electric Mistress and the reverb of the Holy Grail Plus.  The 8 Step Program delivers sequencer control over parameters that respond to expression pedals or CV generators like oscillators, filters, delay parameters.

We wrap up your Best of NAMM with Roland's V-Combo VR-09 live performance keyboard which includes digital piano, organ and synth sounds.

See all other products from NAMM 2013 here.