And the nomad adjective is important, because even if many manufacturers boast about the compatibility of their audio interfaces with iDevices, most of these products are relatively limited in terms of portability: be it due to their size or to the fact that they need to connect to the mains to work, which means you end up being tied down.

But that's not the case with the iRig HD: a miniature interface that is as big as an iPhone, from which it gets its power via a cable with a 7-pin to Lighting or Universal 30-pin connector. Both cable versions are supplied with the iRig to connect it to your iPhone 4 (and later), iPad 2 (and later) and iPod Touch (4th generation and later). 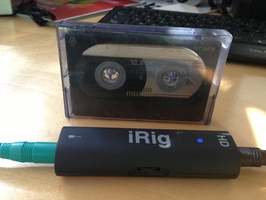 Why use the proprietary connector and not the mic input on the iDevice? To supply the interface with power, but also because, just like the Apogee Jam (and unlike the Peavey Ampkit Link), the iRig HD features its own converters to digitize your guitar's signal. We emphasize this detail especially as the input converters on the iPhone, iPad and iPod Touch are very poor in quality, considering that they were conceived for telephone use. We will come back to this later…

For now let's keep on describing the object, which couldn't be simpler: apart from the 7-pin connector to connect your iDevice or your Mac, there is also a 1/4" jack for your guitar or bass, a knob to adjust the input gain, and an LED whose color and brilliance indicate the interface's status and the input signal's level: dark blue, the iRig HD is in Standby; light blue it is active; green, the input signal is too weak; red, the input signal is too high; orange, the input level is optimal.

To monitor the signal you'll have to use your iDevice's headphone output, since the iRig HD has none. And that's it? That's it! Does it work? 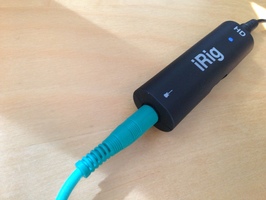 As soon as you connect the interface it is immediately recognized by the iPhone/iPad, so you only need to connect your guitar to the iRig HD with a 1/4" jack cable (not included), your headphones to the corresponding output on your iDevice, and launch your favorite amp simulation app to record in all comfort. Thanks to the Core Audio drivers, the latency remains sufficiently low to not be annoying, while in terms of sound the interface offers a much higher definition than other solutions that make use of the iDevice mic input. Listen to the difference between the original Peavey Ampkit Link (not the HD version) using the iDevice's input and the IK interface on the following examples, which are devoid of any effects so you can really listen to the impact of the converters:

Not only does the Ampkit Link offer no control over the gain (you have to adjust the level via the guitar pickups, which isn't ideal), but its input is also way noisier, with less low end and wicked highs — these are probably the same limitations of the AD converters used by Apple. True, the algorithms of an amp simulation might be able to partly mask such miseries, and even more so with distorted sounds, but it's obvious that the iRig HD represents a real improvement in terms of quality.

The only defect I can see is that it is impossible to use the iRig HD while charging your iDevice at the same time, since it uses the same connector.

In terms of apps, IK obviously recommends using the iOS version of Amplitube. In order to incite you to use it, Amplitube Free provides two amps and three effects (Flanger, whammy and distortion) ─ the latter are available exclusively to iRig HD owners. It's a very nice detail at a time when many manufacturers simply offer a list of compatible software without actually providing any. 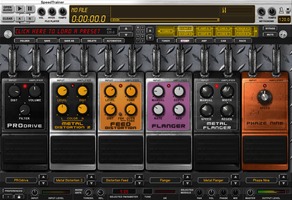 Furthermore, while the Amplitube apps offer many possibilities in terms of sound and functionality (and even more so if you make use of the in-app purchasing option to get newer amps and features), the iRig HD's Core Audio compatibility allows you to use other apps as well: especially JamUp, but also GarageBand, Auria and its simulator OverLoud, etc. But be careful: not all the apps are iRig HD compatible (Multitrack DAW, for instance) or not completely so: I couldn't get any sounds out of my iPhone's headphone output while recording myself with Fire, for example, or even with Audioshare.

Let's finish by pointing out the possibility of connecting the interface to your Mac via the USB cable included. PCs are excluded because IK hasn't developed the drivers for that platform and has merely focused on Apple's Core Audio. While it is regrettable for Windows users, we cannot ask much more of IK MUltimedia, who offers a version of Amplitube Metal bundled with the interface, a present that is worth about €100. A nice gesture for those who aren't already covered in that area.

For 88 euros, the IK MUltimedia iRig HD holds its promises of being a true nomad recording solution for guitarists who use Apple products. Given the problems we had with some apps, we regret the fact that it lacks a dedicated audio output and we also bemoan the fact that the interface does not work on a PC. But IK knows how to reconcile with us by offering a relatively nice software bundle, taking into account the overall price, especially considering that the JamPoints system allows you to get discounts at the manufacturer's online store.