Sporting the same look as the whole iRig series, this Pro version is clearly bigger than the iRig HD especially due to the connections that replace the 1/4" jack of the iRig HD with an XLR/1/4" jack combo connector. The latter allows you to plug a guitar or bass (high impedance input), but also any line level signal (a keyboard, for example) or a mic, regardless of its type, since it features phantom power, which explains the bulkiness of the Pro in comparison with the HD. 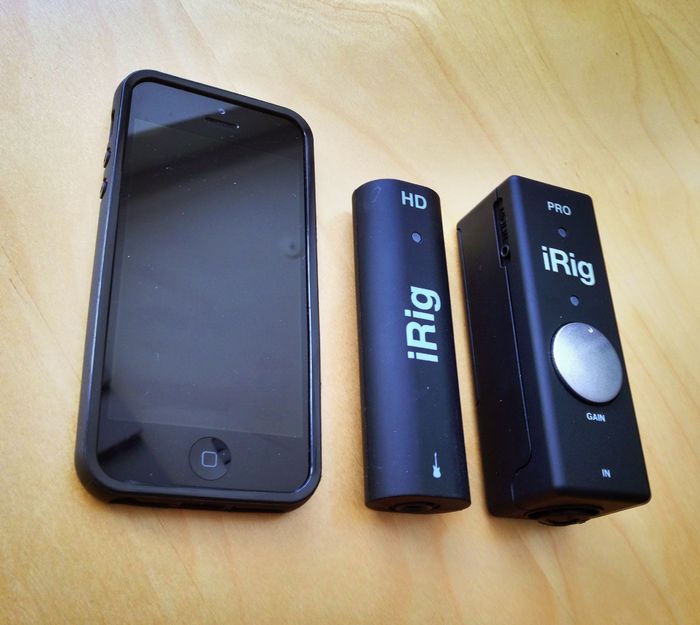 What's more, the former features a minijack on the left side to connect a 5-pin MIDI input via the enclosed cable. Mind you, we are in presence of the first ultraportable audio/MIDI interface for iOS. Nice one, IK! In fact the phantom power to supply the condenser mic does not come from the iDevice, but from a 9V battery located on the back of the interface, and it can be activated or deactivated with a small switch on the right side of the iRig Pro. 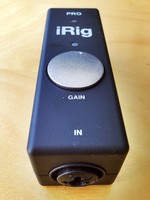 To finish the tour of the property, on the top of the interface we find two LEDs, one that doubles as a clipping meter and power indicator depending on its color (dark blue, standby; light blue, active; green, input signal too weak; red, input signal too high; orange, input level optimal), while the other one provides feedback on the transfer of MIDI data (blue LED) or the use of phantom power (red LED). To complete the lot, a silver "big" gain knob allows us to adjust the level of the integrated preamp.

Apart from the multiple goodies for their own iOS apps, IK offers with the iRig Pro the full version of Amplitube Metal, a full version of T-Racks CS Classic (including a compressor, a multiband limiter, a clipper, a parametric EQ, and a visualization software that can be used as standalone processors or plug-ins), and a full version of Sampletank XT. A bunch of gifts that cost more than the interface itself: very, very nice, particularly considering that even if some of them aren't really new, they are nevertheless worthy of interest…Let's finish by pointing out that on the top of the interface there's a small 7-pin proprietary connector to connect the iRig Pro to your iPhone, iPad or iPod Touch (regardless of its generation), or even to your Mac, and all cables are also included: the old Apple connector, Lightning and even USB… Also for PC? No, that's actually one of our main criticisms of the interface, which otherwise didn't spare anything on the bundle.

So, in short: IK did well on paper. It remains to be seen how the interface actually performs… 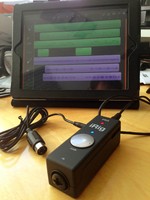 To test the iRig Pro we decided to record a Takamine acoustic guitar with a U87. While we didn't have any problems in terms of gain (between halfway and two thirds of the knob for this example), it should be noted that the LED to determine the signal level isn't very helpful. According to the manual, when green the signal is too weak, when red the signal is overloading and when orange the level is optimal. A good idea, but with the guitar transients it was almost impossible for the LED to remain in the orange without turning red. So, what we did was reduce the level to the green zone to avoid any clipping.

In terms of audio quality there were no surprises. While the iRig Pro does its job in allowing you to record with a condenser mic, it exhibits the same issue as many entry-level preamps: it has a very aggressive high end, which was even more exacerbated with a guitar that already has more brilliance than low end…

Still, it works. And in terms of noise and headroom, the performance of the iRig Pro's preamp is on the same level as many other entry level audio interfaces. All in all, the balance is positive. Moreover it is a lot cheaper than the Apogee One, making it a good alternative solution.

Regarding MIDI, we have no complaints, which is not surprising considering that IK already had a dedicated interface. Our only critique in this regard is more conceptual: if the goal was to be ultramobile, we would have loved to be able to connect to it a mini piano like the iRig Keys or even the Korg MicroKey or Nanokey. But they do not have a 5-pin DIN jack and use the much more common USB port. So, using the traditional DIN connector entails the use of a more imposing keyboard (like the M-Audio Oxygen8 that is huge for a 25-key keyboard), which makes it not such a portable solution anymore. It would have been wiser to provide the iRig Pro with a USB port to connect the iRig Keys. However, the price and the size of the interface would've been seriously affected.

We might expect the solution to this problem to come in the form of an iRig Keys Pro that includes an audio interface with hybrid connectors, but that's not in the agenda as far as we know.

IK strikes a nice blow with this little interface that offers a true audio/MIDI solution for all nomad users of iDevices at a very attractive price. We would have loved a stereo line input, a USB port for a mini MIDI keyboard or even a built-in mic like on the Apogee One. But we must also concede that you have to be mad to complain given the price and the software bundled with it. And if there are better options in terms of quality, it is at a much higher price and based on concepts that are only mobile rather than actually ultraportable like the iRig Pro. So, in short: an excellent choice... until something else comes along!