A Pod For The iPad 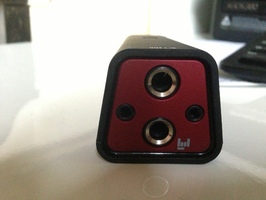 Sold at nearly the same price as IK Multimedia's iRig HD or Apogee's Jam, Sonic Port distinguishes itself from both of them by providing more and... less features!! Significantly bigger than the others, but small enough to still fit in your pocket, it offers quite comprehensive connections: besides the connector for the iPad, iPhone or iPod Touch (regardless of its generation, cables are included for the old and new connectors) and a 1/4" jack input for instruments, it also provides a 1/4" jack output (for an amp), as well as a headphone output and an auxiliary minijack input. While the connections are more comprehensive than on the IK or Apogee products, in comparison with these, it lacks a gain control, which it must be said, didn't prove to be so annoying during our review. Then again, do note that the Sonic Port is only usable with an iDevice, while IK offers the possibility to connect it to a Mac as well. 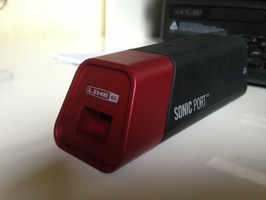 In use, Line 6's baby provides the same advantages in terms of audio than the Jam or the iRig HD. This means that, by using its own converters rather than those of the iPhone or iPad, it provides a wider guitar sound in the low end with better defined highs than with Apple's AD converters. A good point indeed, especially considering that thanks to the additional minijack input, you can profit from it for something else, like a synth, for instance. But do bear in mind that using the Guitar input disables the auxiliary input. So you cannot record two instruments at the same time, it must be one or the other.

Let's finish by pointing out that the outputs allow you to connect the interface to a guitar amp and your headphones. There's really not much to say about them except that the level of the headphone output is higher than that of my iPhone 5. It's good to know that and also to know that this output can also be used by the other audio apps on your iDevice, not only the music apps but also Apple's player…

So, in short, a device that is good in terms of features/size/price but lacks a USB port to be able to continue loading the iDevice while using the Sonic Port, and a mic input ─ or even a built-in microphone ─ to make it the perfect mobile interface. But that would've surely increased its price.

Line 6 would certainly not content itself with merely delivering a device without any software. And it is the perfect opportunity to set itself apart from IK and Apogee. 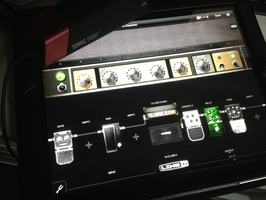 The free Mobile POD, which can only be used by owners of Line 6 interfaces, is far from being as limited as the Amplitube Free. Without an in-app purchase option, it offers 32 amp models, 13 effects on an 8-slot chain and 12 speaker cabinets, which you can combine at will to create an almost infinite number of variations. And to simplify your life, the app can be connected directly to Customtone.com where you can find thousands of free user presets (including many repeated ones), most of which recreate the sound of a particular guitarist or band on such or such song. It's great and the fat sound of the brand is there, even if not everything is perfect: while we can import any song from our MP3 library to play back to it, I couldn't find a way to adjust the volume of the MP3 and the guitar separately.

Apart from that detail, our main criticism of the Mobile POD has more to do with the fact that it has the same interface for the iPad and for the iPhone/iPod. Relatively well conceived, from a design point of view, it is really pleasant to use on a tablet, but it is clearly less comfortable to use on an iPhone, even with the large Retina of an iPhone 5. It's not like the app is useless, but the controls are hard to read and adjust. It's a pity that Line 6 didn't adapt its design to smaller screens, like IK did.

To wrap it up, let's just add that Mobile POD does not have a recorder, which is not all that bad considering that it is compatible with and can be managed by any DAW, via Audiobus.

I wanna Jammit with you 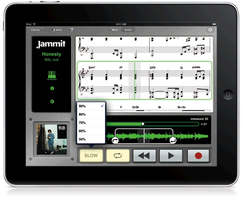 Aside from Mobile POD, Line 6 also refers us to Jammit, another "free" app with an in-app purchasing option, with which it has reached an agreement. Its principle is simple but brilliant: it is a practice tool for musicians that allows us to access sheet music and multitrack playbacks of songs by numerous artists and bands. Songs cost on average $3.99. This gives you access to vocal, guitar, bass and drums parts with the possibility to adjust the volume, mute and solo each track. You can even reduce the playback speed while the sheet music is displayed. An excellent tool that, thanks to the partnership with Line 6, allows you to play the guitar part with the corresponding playback parts of every song.

Apart from the in-app purchasing, which is understandable due to copyright issues, it has only two flaws: it doesn't support tablatures (it can only handle classical notation) and its catalog is very incomplete and with a very obvious musical orientation: there's no Stevie Wonder, AC/DC, Jimi Hendrix, Led Zep, Beatles, Stones, Radiohead, Prince, Arctic Monkeys, Red Hot, James Brown, or The Strokes, but there is a lot of Metal, Progressive and Hard Rock by bands that are well-known in the US: Dream Theater, Dokken, Boston, Rush, Toto, Yes, Paul Gilbert, Pantera, Megadeth. Let's just say that, with a few exceptions, when it comes to Classic Brit Rock and Indie Rock, there's not much to celebrate, even if the catalog demands to be expanded.

It should be noted however that this app is an awesome discovery, and even more so considering that it is available for PC and Mac.

Sold at the same price as some competing products that do not have as many functions, the Sonic Port is not far from being the perfect interface for iOS mobile users. In fact, it only lacks a mic input (or a built-in one) to cover most of our needs. And it would've been nice to have a USB port to be able to charge our iDevice while at the same time use the Sonic Port. On the other hand, the Mobile Pod app, which is reserved to Line 6 interface users, is a very nice surprise in terms of possibilities at a time when similar virtual amp simulations tend to play the in-app purchasing card, which can turn out to be very expensive. In short, a well-accomplished product on different fronts that confirms the continued improvement of pocket-sized computer music.