Ikutaro Kakehashi chose a brand name beginning with an "R," which is quite rare in the music industry and thus allowed the products of the manufacturer to distinguish themselves from competitors during international trade shows.

We all know the company for its electronic products: synths, drum machines, effects (under the name Roland as well as under the brand name Boss for guitar effects), electronic drums, and other MIDI gear. But I know only a few bass players who play a Roland amp. This doesn't mean that Roland amps don't perform good, but we must admit that the manufacturer doesn't belong to the most renowned brands among four-string players. With the present review, we want you to discover the Roland Cube 120 XL bass combo that saw the light of day after the introduction of the guitar version.

13 demonstrators were shot during the Irish Bloody Sunday while 16 men survived the crash of their plane in the Andes where they had to eat human flesh until rescuers arrived. In 1972, bass players Christian Mac Bride, Mike Dirnt and Mark Hoppus were born. And in Japan, two major events marked the year: on a national level, Okinawa finally returned to Japanese hands; while, on the musical level, the company Roland was created. I would love to write about Roland's history and share with you some delightful anecdotes about it. But with its 12 controls, 9 switches and 8 connections, this small Cube gives me enough material to write two reviews.

So, I won't lose any more time and I'll start by describing the amp. 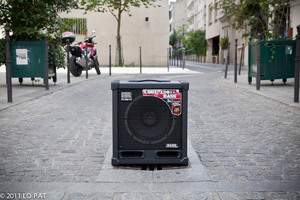 If the Rubik Cube had had uneven dimensions, users would have called it misleading publicity a long time ago. I hope this brief remark made it more enjoyable to read about the Cube's physical dimensions... And let me add another figure: the amp weights almost 44 lbs, which is not so heavy considering the output power of 80 watts, but also surprising considering the dimensions. In this respect, I guess the first request of the normal user would be for Roland to add casters to the amp. The younger and more athletic readers will surely laugh, but my back doesn't. It's old and has had plenty to withstand already. The single handle is also not the best solution, maybe Roland should rethink the design to improve the ergonomics.

If the amp won't move a lot and will stay in the studio, this is certainly an insignificant detail. However, it's better to be safe than sorry, especially when it comes to my lumbar vertebra. Just try to play three gigs with a 5-string bass and an aching back and you'll become as demanding as me! I know those of you familiar with osteopathy will agree with me. But let's go on (don't let my digressions distract you), and talk about the finish. Even if there's not much to say.

Although it doesn't look really nice, the CB120XL has the advantage of being simple and rugged. No carpet covering but a simple black Tolex one, reliable protection edges (where shocks can have bad consequences) and a strong protection grill. Finally, the combo is equipped with a 12" woofer and huge coaxial tweeter horn. Two front bass reflex ports allow the air moved by the woofer to circulate. The product is made in China. By the way, did you know that China and Japan restored diplomatic relations exactly the year Roland was founded? 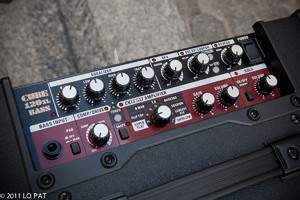 First of all, you get 12 controls dedicated to the EQ section and internal effects. In the first row, you'll find four controls for the 4-band EQ, and the effects: chorus, octaver, delay, sampler, and reverb module. The editable parameters of these modulation effects and the loop editor are quite basic: you get three controls plus two switches to control everything. I owe you an explanation: the first control is a chorus/octaver balance. The first half of the control range determines the chorus ratio, the other half increases the low-octave level. The second control is dedicated to the delay and sampler sections: the first half of the control range affects the echo frequency, the second half controls the sampler, which also has two switches. The first one allows you to start the recording, playback and overdub, the second one allows you to adjust the click to quantize the takes. There is one last control that allows you to switch between two reverb types (Room or Plate). This facility is certainly a detail considering the instrument we play. But the description of the control elements doesn't stop here because there is a second row full of controls.

It includes a compression/saturation balance control, a contour control, a big dual-function incremental rotary knob. The latter allows you to choose between eight factory presets or to control the integrated tuner, which can be calibrated for each string. I'm still thinking of a meaningful reason for this feature, and especially for both additional notes: A flat and "open-string" G. Hold the switch down for at least one second to switch the tuner into chromatic mode. We really missed a display indicating the note being payed so that the user knows which tone of the scale is the reference. Besides standard input and output level controls, you'll find a nice feature: a memory allowing you to store your favorite settings (solo). Push the switch to activate the channel, hold it down for two seconds to store. You even get a volume control to set the balance with the standard channel. This can be very useful, especially if you are looking for that big sound you had the day before but just can't remember the settings. Another (not as useful) advantage is that you can use this memory to sample a loop with delay. The control panel also provides you with a standard instrument input with an active/passive switch.

On the rear panel, you'll find a speaker out for an additional 8-ohm speaker, a balanced line out, a phones out, three footswitch connections (necessary considering the number of internal effects), and an aux input on a minijack. Comprehensive all around!

Your Girl is Crying in the Night 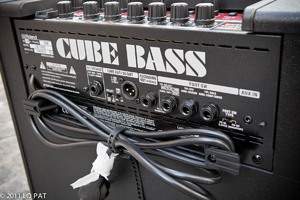 For this review, I went back to some good old French repertoire (ever heard of Claude François?). Don't ask me why. I didn't know what I should play (it's not always easy to find the right inspiration and, besides, recording myself is still a painful challenge), but my neighbors had the TV on, so it will be Magnolia Forever for all of you! I apologize in advance to Claude François' fan club for my playing: I like this bass line but I haven't mastered it at all (and as usual, I learned it only one hour before recording). I used a Beyerdynamic M88 mic to capture the speaker signal, a Precision Bass Deluxe V and a Novation audio interface. I guess I'll try to mike the speaker using two mics in the future. But, considering the number of examples in the present review, I mainly used direct recording, except for the two last examples, which I recorded with the mic. For the last two takes, I decided to record with my favorite settings, which I describe below. Let's start with the most simple thing: the EQ. You'll find five examples illustrating the behavior of the contour filter and the four frequency bands:

In the first sound sample, everything is flat so that you can hear the basic sound of the amp with my bass guitar. The response is not fully linear, it has a slight boost in the high-mid range. It reminds me a bit of Ampeg.

For the second example, I just pressed the Shape button to contour the sound. You'll notice that the difference with the first example is minimum. This is certainly due to the direct recording which doesn't reproduce the behavior of the tweeter horn.

Afterwards, I contoured the sound by boosting lows (6), cutting all mids and pushing highs to the max. The dynamics is much more present than with the Shape function.

Now, let's give the effects a try — an indispensable feature in the amp of a renowned stombboxes manufacturer. I'll start with modulation, although I must admit that I don't like such effects so I'll let you make your own opinion about it.

Did you ask for an octaver? Here it comes. I find it doesn't sound bad at all since it holds the tone regardless of where you're playing on the neck of the instrument.

Do you feel like an inhibited guitar player when you stand up every morning? Do you feel nostalgic about the years when you were a choirboy? Have a reverberation therapy. But go easy, don't overdo it! Otherwise you could face a mystical revelation.

The sampler is a nice tool to practice lead-bass playing or to add a bit of harmony to a groove if you play in a small band. This feature is a valuable bonus, but it's absolutely not easy to use if you don't have the optional footswitch. For this example I first played a short bass line that is looped, I then added a lead melody that is also repeated, and finally I added some harmonics.

There is nothing like a good compressor. But it's a pity that integrated compressors rarely have a good quality. On Roland's combo, as well as on competitor products, the compressor doesn't offer enough settings. Moreover, I don't understand why Roland forces us to choose between compression and saturation (unless it's for lack of space). Here is the same bass line with different compression levels.

Same thing with saturation, which sounds like a rather muddy fuzz. Angry musicians who like to throw up sound will appreciate it. Or not.

You can't find the right settings? You don't like to spin knobs? You're really lazy when it comes to sound shaping?

Let your friend Roland lead you through a collection of factory presets making things easier. You can choose between eight different voicings.

As promised, here are two examples recorded with the microphone so that you can listen to the woofer and the tweeter. For the bass line (finger picking), I used the settings described in the 3rd example plus Shape. For the slapped bass line, I used the settings described in the 4th example plus Shape. To me, the overall tone is pretty good considering it's a small combo, but it doesn't make wonders. In the beginning, it wasn't easy to find my sound. After digging deeper, I found at last two settings I liked, which is good since I'm very demanding when it comes to amplification.

A tester must know how to put things in perspective instead of reviewing a product only from his point of view as an experienced musician. If I put myself in the shoes of a young bassist having only a fistful of dollars in the pocket looking for a first rehearsal amp that offers versatility and some effects, I think I would seriously consider the Roland Cube. For $736, this amp is very appealing.

Used without an additional speaker, the small combo provides enough output power to play in a band with a drummer. The tone is good, not kicking but good enough to make your first steps with a band. Personally, I find the effects are dispensable. But if I put things in perspective, once again, I guess they can be useful for some beginners interested in effects. And I cannot reproach the manufacturer for making use of its knowhow by adding many electronic features, even if it's a bit useless from where I stand. Moreover, this trend is noticeable on many similar products... So Roland also has to appeal to these young musicians who like new technology!

Note that Roland's catalog, which includes only combo amps, also features two smaller versions: a 20-watt amp and a battery-operated amp with four 4" speakers. I would like to invite you to read my next bass amplification review with a colorful brand that's following a completely opposite direction.