Chandler Limited will unveil at the end of the month a clone of one of the most iconic piece of gear used at the Abbey Road Studios.

According to Chandler Limited, who is willing to keep his secret until September 26th, when he will be offering a sneak preview of the gear at the Pensado’s Place/Vintage King Gear Expo 2015 in Nashville, the device reproduced was used on every recording made at the Abbey Road Studios since de 60s. This “recording device” was never released to the public and every attempt in recreating is has failed… so far.

Any idea of what this piece of equipment might be? Here’s a picture posted by Chandler Limited on Instagram: 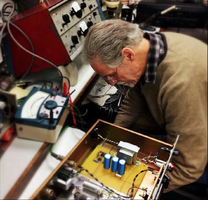