The reverb from heaven?

Something that didn't go unnoticed by other plug-ins makers: the latest Slate Digital VerbSuite Classics uses the same surprising technology with undeniably good results, too. Yet, Matthew Hill, the mastermind behind LiquidSonics, doesn't seem to like to rest on his laurels. He recently introduced a new reverb that takes the possibilities of his famous Fusion-IR far beyond the extents of what we knew so far. It goes under the name of Seventh Heaven and is available in two versions: one fully fledged called Professional and a lighter version. This review deals basically with the Seventh Heaven Professional version (SHP, for those in the know), although we'll also reference the "light" version where appropriate.

SHP is available in VST 2/3, AU and AAX format for Mac OS X and Windows (32 and 64 bits) and features LiquidSonics' own Fusion-IR convolution technology. This plug-in uses exclusively impulse responses created from the famous M7 hardware reverb, thanks to an agreement with the manufacturer - Bricasti Design. For those of you who don't know this fabulous toy, the M7 is a digital rack reverb that has earned itself a place among the big players in the genre despite its young age. LiquidSonics fans will probably remember that the company had already made some fusion IRs based on the M7 when Reverberate 2 came out, as well as for the VerbSuite Classics. But Mr. Hill says he started from scratch to create the SHP library in order to capture as faithfully as possible the unique character of the hardware model and to be able to offer options specific to the M7. Hence, the user will have to install almost 10 Gb worth of data (separated into three downloads) to profit from the 218 presets available. Do note, however, that you can choose to install the basic pack (3.2 Gb) with 80 presets, but it would be a real pity. Besides, you can install the libraries on an external drive, which is a very welcome feature.

To finish with the purely practical stuff, you must use a USB iLok 2 dongle for SHP to work. It's a shame that the software maker doesn't offer the possibility of using the iLok linked to a computer authorization option. But then again, according to our sources, Reverberate 2 seems to have been widely pirated, which makes this change of policy quite comprehensible.

Now let's see what it has to offer…

The software's graphic interface will impress you the first time you launch it. Its elegant red and black looks make SHP comfortably readable. The fact that the window can't be resized isn't an issue and the software is very easy to use, compared to the much more complex Reverberate. The main controls are literally one click away with the mouse, while a hideable panel at the bottom of the interface gives you quick access to advanced settings. In short, it's nice, simple and incredibly functional. Hats off, Mr. Hill!

Considering the software maker has an excellent user manual readily available online, I won't waste your time describing how the software works. I think it's better to focus on its particularities.

Let's begin with the presets. Seventh Heaven Professional includes all M7 presets (except for the four NonLin patches which ought to arrive soon enough with a free update), in other words, those of version 1 with "natural" sounds and those of version 2 whose reverb tails have been modulated to produce a more "musical" result. Accessible via two menus right at the center of the interface, one for the families (Ambience, Chambers, Halls, Plates, Rooms, Spaces) and one for the presets themselves, these 218 presets are simply incredible and require almost no fiddling at all to adapt to any source. In this regard, SHP is pretty close to the memories I have of when I've used the M7 hardware version in the studio.

If you want to tinker with the sound, you can play with the balance between early reflections and reverb tail. Something quite unusual in the convolution reverb world and which gives you an extraordinary comfort when you need to fine tune the result. Indeed, you can actually work in a flash::

Furthermore, just like its celebrated role model, SHP offers the possibility to fine tune the reverb tail level below 200 Hz with the VLF (Very Low Frequency) parameter. This is very interesting because it allows you to play with the "fullness" of the reverberated signal. What a treat!

To finish with this brief overview of the main settings, I'll mention the three useful visualization tools which display, on the right part of the interface, the input and output level of the plug-in, but also the level of each of the three different components of the reverb (early reflections, reverb tail and VLF) separately.

Through the hideable bottom section you can access two panels. The first one features 10 very well thought out settings, including a pattern selector for the early reflections, a pre-delay, a delay with sync-to-tempo function, as well as everything you need to carve the frequency response of the software. And as if that weren't enough, LiquidSonics added, in the second panel, a 5-band EQ to shape even further the sound at the output. Once again, simple and effective.

And there is still much more we could say about this little wonder, like, in no particular order:

Bur instead of keeping on listing these small "details," let's move on to assessing the user experience. As I've already said before, SHP is extremely user-friendly. To the point that's is easy to forget that it's a convolution reverb! No, seriously, the versatility and effectiveness of the plug-in categorically do away with the hitherto borderline between algorithmic and convolution reverbs. A great achievement, indeed.

But does all of this translate into a similar quality of sound? Spoiler alert: yes it does.

Let's begin this listening session with an eccentric lullaby:

The original clip has a characteristic sound already, but all in all it resembles a clumsy collage. On the second clip, the Old Plate preset gives a bit more depth to the Mellotron progression. The result is very nice, but it still lacks some glue. No problem! A bit of the Cinema Room preset on the master bus and that's it. The fourth and fifth clips follow the same principle with two presets: Deep Chamber for the Mellotron and Music Club for the entire thing. Just like that, SHP can bring to mind ambiances in no time and with some character, of course!

Let's try it on the drums now:

The kit ha been meticulously processed to sound "in your face." Unfortunately, the body of the instrument was significantly altered in the process. The 07 clip uses an instance of SHP for the entire kit with a short reverb taken from the Ambience family and a good deal of VLF to really fatten the result. For the next clip I added a bit of the Music Club preset to push the drums backward. Finally, on the last clip I used the Gated Space preset on the snare with the pre-delay and delay synced to tempo to modify the overall groove. Interesting, isn't it?

For the two following clips, I gradually applied a 30-second(!) reverb on an e-piano line automating the Mix knob. The first clip uses the Europa preset from the M7 v1, while the second one uses Concert Wave from the M7 v2.

Let's see now what SHP can do for an entire mix: 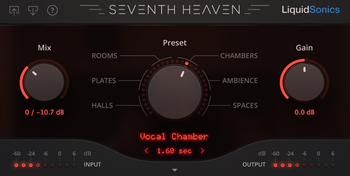 The first clip is the dry mix. For the second one I used SHP on the music bus (i.e. without vocals) to give it all a coherent sense of space. On the third one there's a Plate on the vocals bus exclusively. The fourth one is a mix of the two previous ones. Finally, on the last clip I added a third instance of SHP on the Master bus to glue it all together. Granted, it still needs some fine tuning. But still, it's quite impressive what you can achieve with only three instances and a couple of clicks!

To finish, I'll use a vocal track to illustrate the impact that changing the pattern of the early reflections has:

As you can hear, fiddling with this parameter alone you can achieve quite a bit.

Before closing this review, let's take a moment to discuss the price of Seventh Heaven Professional and the lighter version. 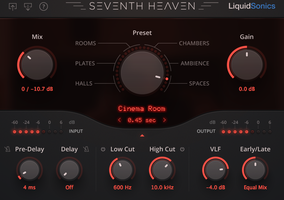 With a price tag of $349, SHP is definitely not something anyone can afford. However, considering its sound quality and ease of use, it's not overpriced at all. It's clearly a professional tool that will satisfy even the more demanding users.

Besides, home studio owners can also benefit from its qualities with the "light" version – Seventh Heaven. For only $69, you get 30 presets from the M7 v1 which are identical to those of the Professional version. Seventh Heaven obviously offers much less sound shaping options but it's more than enough to get high quality results. What else could you ask for?

To wrap up this review I will make a very personal statement. I mean, it's obvious that I fell head over heels in love with Seventh Heaven! Ever since I had the chance to use a real M7, I've always drooled about the possibility of adding one to my personal studio. Unfortunately, while I can live a decent life thanks to my musical activities, this extraordinary hardware reverb is absolutely out of the question for me, due to budget reasons. Who would've thought that LiquidSonics would offer me the possibility to have, for a fraction of the prize, a plug-in whose audio quality has nothing to envy its hardware counterpart? Life is indeed beautiful!

To be honest, Seventh Heaven Professional has seduced me to the point that I am positive I cannot be entirely objective. That's why I recommend you to download the demo version to check it out for yourselves. As far as I'm concerned, it gets the highest rating possible and the Best Product Award. It's been almost five years since I started writing reviews for Audiofanzine and I think it's the first time I've ever given such a rating, but I have no doubts about it because SHP is hands down the best software reverb available today.