The life of a "computer music reviewer," regardless of whether you do it occasionally or in a more steady way, can be full of good (and ugly) surprises, although most of the time it's pretty "normal," because it's rare to find yourself with products that are totally out of the ordinary. You can be surprised by the quality or the sound of a sound library, the cunning or the possibilities that this or that script provides, or the design and functionality of an instrument or processor plug-in. But to come across a product that is completely innovative, one that revolutionizes its market segment, is pretty rare.

But that's not really surprising. You can't expect developers to reinvent the wheel with every new product, the same way you can't expect its users to revolutionize the music scene with every new chord progression. But it can't be denied that when you find yourself with a polyphonic Melodyne, a real-time pitch corrector like PitchMap, and other wonders that are the result of sound-music-computing research, your reaction is completely different than when you receive the latest version of a compressor or a filter, the new string or acoustic piano library, no matter how well-achieved they are.

Whenever you take a look at the list of new products released, some of them arouse your curiosity more than others. You may often find yourself expecting the moon and stars, only to be struck by reality or downright plunge into an abyss of disappointment ("Caramba, I fell for it again!").

Well, the announcement of the launch of REmatrix, and a look at its specs, sparked that special something in me. What are my impressions after putting it to the test? Read on. 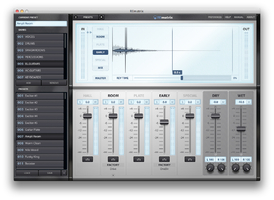 The software is the result of the collaboration between Overloud, a software developer that is far from being a stranger to the reverb world ─ having released VKFX, BReverb 2, TH2, Mark Studio 2, and Spring Age; and MoReVox, a developer specialized in sampling, loops and impulse responses. This last expertise was particularly helpful here, since the reverb is mainly based on convolution.

REmatrix presents itself as a plug-in in AU, RTAS, VST, and AAX formats (in 32- and 64-bit versions), but also works as a standalone program. The software currently has an introductory price of $197, afterwards it will sell for $399, which places it in the higher category of tools, even if a high price doesn't necessarily imply high quality (and vice versa). It's also important to take into consideration that REmatrix can be authorized on three different computers simultaneously (with a serial number), as well as on a USB key, which allows you to go anywhere with your reverb (if you remember to take the installers with you...). At a time when certain software developers allow only one authorization on a key for the same price (or even higher), Overloud's choice is more than welcome.

The reverb's most original aspect is the way it's conceived, since it's not made up of one single convolution engine, like most other convolution reverbs, but five, each of which is specialized in something. On the other hand, the path taken by the audio signal after being processed by either of the engines, or any combination of up to five successive impulse responses, will include a series of additional modifications which we'll discuss a little later.

Moving on to the details: The five convolution engines are dedicated, respectively, to Hall, Room, Plate, Early, and Special sounds, in that order. Impulse responses (IR) are loaded into the lower part of the software, where the five volume controls of the engines are, plus the Dry and Wet controls. Each sub-reverb has a level meter with a clipping indicator, and a  Mute and Solo button. The Dry and Wet faders have Mute buttons as well, plus L and R knobs to adjust the stereo position and width more precisely (offering true panorama control, not only balance).

The screen above the volume faders allows you to see the waveform of the IRs one by one, depending on the buttons selected, or the result of all of them, if you press Mix. The display also shows the respective volume in relation to the original one, and allows you to play with the Rev Time in real time, without any audio dropouts: This means you can change the duration of the IR on the fly, which is pretty impressive, considering that almost all convolution processors cut the signal while computing the result. In this case, the signal goes through while the software applies the changes. And it's pretty fast (a small Apple-like progress wheel indicates the processing going on). We can't stress enough the surprisingly low CPU consumption for a plug-in with so many parameters (see text box).

IR is the future

Both developers provided the convolution processors with IRs corresponding to each of the room types available. In total they amount to 250 impulse responses and 400 presets, classified in the browser located on the left part of the software: In the upper part are the Banks, ordered by instrument or genre (21 families), and, in the lower part, the presets (between 20 and 35 per family, only one has 10).

When you click on the small volume cursor of each convolution engine, the browser gives you access to impulse responses in the upper part, displaying their duration to the right of the name (very handy, thank you), while the lower part shows two parametric EQs and the Pan, Stereo, Length, and Delay controls (per engine). You have factory IRs and a menu for your own responses (My IRs, which you can easily import with the Import button).

That alone represents a huge amount of possibilities in terms of sound design. In fact, if you have in your head a particular space, be it real or unreal, you can "create" it pretty quickly with direct control over the duration, placement and localization of the sources, etc.

And that's not all.

In the line of effects 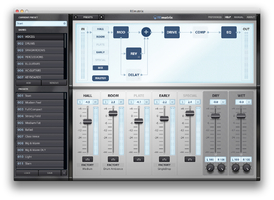 Once the reverbs are synced, you can click on the Master button on the display, which will show a general view revealing the tool's supplementary richness. Indeed, the signal processed by the five engines will go through a series of modules, all of which can be activated at will, although you can't change the order in which they are placed.

The first destination after the mix is a modulation module (with three parameters: Width, movement and intensity), which resembles a chorus. From there, the signal goes into a Sub-Mixer marked with the " + " symbol (no parameters available), where it is then derived to an algorithmic reverb module (whose parameters strongly recall those of BReverb, but less comprehensive, obviously: Duration of up to 20 seconds, diffusion, level, and two filters), and then a delay (with the following controls: Duration, expressed in ms or in a rhythmic value, reinjection, filter, stereo for ping-pong, and level), both of which return to the Sub-Mixer.

The latter directs the processed signal towards a chain comprising a Drive module (with rate and "color" parameters), a Comp(ressor with attack, release, output gain, and Sustain controls, where Sustain replaces the ratio and threshold parameters, like in the old days), and, finally, a dual parametric EQ, which also offers high- and low-shelving filtering.

It would be hard to showcase all the IR presets and families of REmatrix. But you can do that at home thanks to the demo available at the developer's site.

Rather than giving you lots of examples, I opted for a preset that calls on numerous resources of REmatrix, which will allow you to listen to the whole and then to each element that makes up the reverb preset. And you can find many other audio examples at the developer's site, here.

Let's start with a vocal-based song, with the Voices/The Vocal Hall preset.

All modules, except for Delay and Drive, are active, and the program uses five IRs. I'll begin by deactivating Mod, Rev, Comp, and EQ. 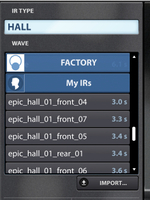 To finish, what makes a convolution engine ─ or five of them ─ interesting is the possibility to import impulse responses that do not correspond to spaces or hardware reproducing a space. In plain English, any audio file you please.

So, here you have two examples of sounds achieved by importing different sound sources and mixing them with the software's IRs, in order to process somewhat unsophisticated sounds.

These type of sounds can be immediately imported into a sampler, with the simple addition of a LPF to get a custom pad (I tried it out with the exs24 and a 24 dB/oct LPF).

The original source (the one I sent through REmatrix) was this:

Or you can even do this (the last note isn't processed in any way, I just let it ring on, and it's played back normally, until the end of the file resulting from the processing with REmatrix, which served to create the instrument):

One word: Wow! From an audio point of view, REmatrix is at the same level as any high-end software reverb available right now. From a point of view of the possibilities it offers, it's ahead of most of what you can currently find out there, successfully putting an end to the static aspect of convolution. From an implementation point of view, it's almost faultless: Starting with the CPU consumption, which is surprisingly low, considering the number of processing options. The design and usability, the display that makes it easy to understand what's going on (in a pedagogical way) and the shortcuts (click+Shift to move all faders simultaneously, etc.) are just perfect. The fact that there are no audio dropouts when modifying things is also a real plus ─ no more distractions when working.

There are a couple of shortcomings, though (to keep in mind for future updates): Considering the number of parameters, it's a pity there's no LFO or modulation envelopes (even if everything can be automated via the host). And it would also be nice to be able to insert the modules as you please, after this or that IR, in other words, for it to be more modular. But there's no reason to deny yourself the pleasure. Thanks to its concept, REmatrix is a breath of fresh air in the reverb world, not to mention its design and audio quality, which make it a serious contender if you are looking to invest in a reverb processor. The price shouldn't be a hurdle if you consider the quality of the software (which is fundamental) and the four possible authorizations. REmatrix truly deserves its Best Product Award.