In 2013, Waldorf introduced the Rocket, a paraphonic hybrid synth in the form of a compact module. More recently, in the same series, the 2-Pole analog filter offered to warm up somewhat dull signals. But the biggest surprise was the discovery this year at Frankfurt of the third module in the series, which goes by the name of Streichfett. Just as intriguing as its name, which is impossible to pronounce without twisting your tongue, is the reason to be of this small module: To imitate the String Machines from the 1970s and some of their hallmark effects ─ and all for just a couple hundred bucks. Let's see what it's made of without any further introduction!!

The Streichfett shares the same module design with its predecessors, which includes a rigid plastic shell and painted-steel front panel, a weight under 2 lbs, and 7.4" x 7.4" dimensions. The white and fuchsia letters on the black background are impossible to miss. It's pretty generous in terms of controls: 10 pots, 8 switches (2- or 3-way) and 5 square, backlit buttons. Overall, the build quality is all right: The decently sized pots are a bit loose at the shaft, but not too much, the toggle switches feel sturdy, but we had to readjust the cover of one of the push-buttons. 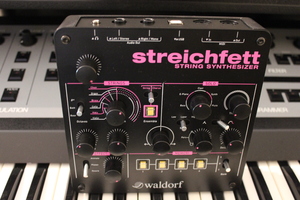 The unit is divided into four sections: Strings, Solo, Effect and Memory. Everything is pretty straightforward with the Streichfett. Waldorf obviously didn't forget about the volume pot, which affects (this time) the line AND headphone outputs (unlike on the Rocket…)

The rear panel features basic, screwless connectors: A mini-jack stereo output, left/right stereo line outputs (on unbalanced 1/4" jacks), one USB port and MIDI in/out. The USB can be used to supply power to the unit and transmit MIDI. The removable PSU/USB is fortunately included (with plugs for any power outlet in the world), but you can also bus power the Streichfett with a PC or a controller capable of delivering the required power via USB. Besides providing power, the USB port also allows the bi-directional transfer of MIDI data for sending and receiving MIDI CC (long live automation!), global program transfers and OS updates (we tested version 1.08). So, no audio via USB...And, by the way, where's the on/off switch? There is no on/off switch!

In our experience with the Streichfett, it proved to be very user-friendly. You gauge carefully the type of sound from the Strings section with the Registration pot, engage the Ensemble effect, which is typical on this type of gear, and adjust the attack and release. Then you move on to the Solo section, using almost the same method and settings, except for the Ensemble effects, which is replaced with a tremolo. Then you mix both parts, you assign them to the entire keyboard or only part of it, choose the split point, and that's it. Finally, you can use additional effects to liven up the Strings section or to create spaces. Once satisfied with the settings, you hold down one of the four memory buttons and then choose one of the three banks with the switch. As soon as you release the memory button, your precious settings are immortalized. In addition to these 12 memories, it would've been really nice to have a panel mode reflecting the settings on the panel, to avoid skips when you edit a program. A suggestion for a future OS update. 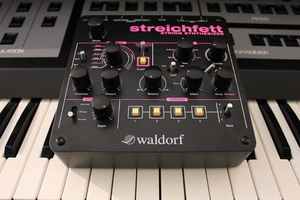 By the way, the Waldorf team wasn't trying to model a particular String Machine, but rather took their inspiration from some of them, namely: Korg Lambda ES50, the Eminent Solina String Synthesizer (a rare model, different to the Solina String Ensemble), the Hohner String Performer and the Elka Elkatwin 61. Listening to the sounds, it's easy to notice their high audio quality and the absence of background noise, which isn't the case with vintage String Machines, whose BBDs bleed sometimes.

It's also joyous to hear a very well-accomplished '70s-type sound. To achieve that you have to precisely adjust the Registration pot because the Streichfett allows different sound mixes, as we will see in detail. You can occasionally hear steps when slowly changing Registration, but it's far from being a deal-breaker. The strings sounds are lively, with gritty lows and sharp but not aggressive highs. The initial position generates a square wave, but you quickly arrive to the typical synthetic strings sounds turning the Registration knob. The choirs have a very spirited organic side; you can modify the formants by changing the Registration. 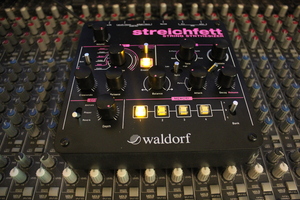 Finally, the organs display an extreme density, especially when you combine two octaves with the appropriate button. The Solo section is there to spice it all up with percussive and evolving sounds, across the entire keyboard or part of it, as a global layer, bass or lead. The effects are an undeniable asset, be it to modulate the sounds or provide them more space. The Ensemble effect plays its role perfectly. Incidentally, the audio examples in this review include a sequence of all Registrations with and without Ensemble.

In this regard, we added some individual audio examples of the vintage String Machines in the studio. The goal wasn't to make a strict comparison, because the Streichfett isn't inspired in the four units we used, the Logan String Melody II (Cocktail), the Roland RS-505 (MixedStrings), the Eminent Solina String Ensemble (Relay and StringPhaser) and the Roland VP-330 (VocStrings), with a Small Stone and a bit of the H3000D/SE. 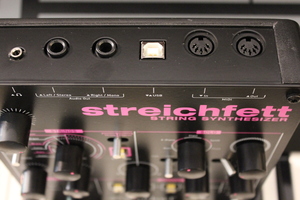 The Strings section is the core of the audio engine and it features a clever design that's worth lingering over a while. It provides total polyphony (128 notes), so you can put as many hands as you wish on any MIDI keyboard and the Streichfett will always respond fine. As we've already seen, the Registration pot allows you to adjust the desired sound. The Streichfett doesn't just settle for imitating synthetic strings, it includes violins, altos, double basses, brasses, organ and choirs. In other words, almost everything you can find in vintage machines with octave dividers (the first one who says he lacks a harpsichord or a vibraphone will be hanged!). Rather than choosing this or that sound (meaning a preset combination of filters, formants and EQ applied to the oscillator), the Streichfett morphs progressively between consecutive sounds, which allows for some nice mixes: violins + altos, altos + cellos, cellos + brasses, brasses + organ, organ + choirs… Right at the center of the travel you get the choir sound alone with different formant settings when you turn the Registration knob… At the end of the travel you can get up to four mixed sounds: choirs + cellos, choirs + organ + cellos, organ + cellos, organ + brasses + cellos, and the enormous choirs + organ + brasses + cellos! Granted, the mixes are chosen by Waldorf, but they made pretty good decisions.

The sound can be played according to three octave modes: low octave, high octave or both at the same time, to keep the mix tidier! A Crescendo envelope (attack)/Release allows you to vary the volume, like on vintage String Machines. Each voice has its own envelope, like on a Logan String Melody (and unlike the Solina, VP-330 or RS-505, which are paraphonic, so when you press a key anew it retriggers the only envelope that affects all voices!). Finally, an Ensemble effect, inspired on the Solina String Synthesizer, produces the typical String Machine sound, which would otherwise be reduced to a dull, lamenting low-end organ, especially with the strings and the choirs. But rather than settling only for the typical Ensemble effect (called String in this case), Waldorf also provides a Chorus and a String + Chorus combination. We won't beat around the bush, this modeling is very well-accomplished, up to the point that I regret the absence of an audio input to process external signals.

The Streichfett would already be an extraordinary module alone with the Strings section, but the Waldorf team was very generous when conceiving it and they also added a Solo section. 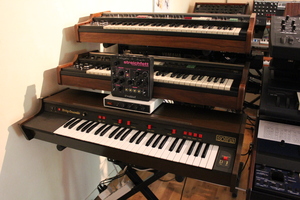 Actually, the term Solo is inappropriate because it provides 8 polyphonic voices, which are independent from the Strings section. A dedicated knob allows you to keep a balance between Strings/Solo. And even better, you can play the Solo section in Split (low or high, with programmable note) or layer mode (across the entire keyboard). In terms of MIDI, the Streichfett sends data on only one channel but the Strings and Solo sections can receive data on two consecutive channels (from 1-2 to 14-15), thank you!

Let's take a closer look at that: Like with the Strings section, you start by choosing the type of sound to play, once again with a progressive blending of two consecutive sounds (but not 3 or 4 this time): Bass, E-Piano, Clavi(net), Synth (really fat) and Pluto (not Mickey's best friend but rather the emulation of the Planet sound on the Hohner String Performer!). Then you decide where the Solo section is to be played: Below or above the Split point or as a layer (on the entire keyboard). Then you add the stereo Tremolo effect, with unfortunately only one pot to control simultaneously the rate and depth. And, finally, you have the envelope, which is pretty original considering it can work in AD or ASR mode (with infinite Sustain) thanks to a dedicated switch. Depending on the selected sound, it acts on the timbre and the volume. Solo sounds have a percussive attack (the same for all of them), where the volume is adjusted digressively the first third of the Attack pot's travel, nice! 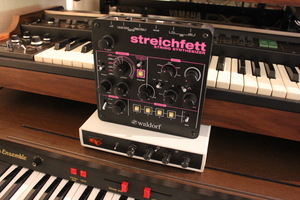 Besides the Ensemble/Chorus and Tremolo effects dedicated to their respective generators, the Streichfett offers three additional effects available simultaneously: Animate and Phaser for the Strings section only and a Reverb, which can be used globally. Animate is made up of an LFO that slowly sweeps the sound of the Strings section, creating cyclic sonic evolutions, as if you were moving the Registration pot on both sides of its physical position, but this time the morphing is smoother. The Phaser creates a faster or slower sweeping and it colors the Strings section. From the last third of the travel onwards, it generates a fixed filtering. Finally, the reverb provides different room colors with a vintage spirit.

Each effect has only one pot that acts simultaneously on all parameters foreseen by Waldorf: Rate and sweep depth for Animate; feedback, depth and rate for the Phaser ((including settings with fixed phase); mix, room size and damping for the Reverb. As we already said, the quality is very good. These effects are no gimmicks and actively contribute to shaping the sound. Even if the presets chosen by Waldorf are once again spot on, we really regret the absence of parameter editing possibilities and independent routing from/to each effect. Likewise, it would've been nice to have an audio input to process external signals with the effects, especially with the Ensemble effect…

The Streichfett is true bombshell. It allows you to approach loads of '70s paraphonic synths with dividers in a very nice way, which is something no other hardware module offers right now. Featuring memories, MIDI and USB (which makes it remote controllable), and being easy to use and perfectly suited for studio or stage, it will rarely be redundant in a musical setup. In my view, there's even room in the market for a Streichfett keyboard with more controls, the possibility to subtly mix all sounds, a motion-type sequencer to sweep the mix, a more flexible routing of the effects, and an audio input to process external signals… plus a power switch! Anyway, given its sonic originality, attractive price and atypical functions, the Streichfett amply deserves its 2014 Best Value For Money Award. Bravo Waldorf for this achievement!