Although Yamaha has become a huge corporation that exports products as diverse as hi-fi amps or motorcycles all across the globe, the Japanese company started out manufacturing organs, and still continues to be one of the major players in almost all music-related industries, especially guitar manufacturing.

The girl in black

The black finish of the guitar we tested looks nice, but purists need not worry, there's also a "natural" version. The only real inconvenience of this finish is that even the smallest dust particles can be easily spotted, which will force the user to clean it often.

Nevertheless, we can only salute the overall sobriety of the small Asian guitar, although there's a small detail that gives away its budget-priced construction: the glue between the neck and the body seems to have been applied with a trowel, and the lacquer makes it even more evident by highlighting the white glue. But don't panic, it doesn't affect the sound quality nor the life of the instrument in the slightest. Too much glue is always better than not enough!

Yamaha's wood choices for the instrument were pragmatic: classic spruce (plywood) for the soundboard, nato (low-cost alternative to mahogany) for the sides, back and neck, and rosewood for the bridge and fretboard. The nuts are made of plastic, like on most entry-level guitars, and the one at the bridge is not compensated. However, there are no problems with tuning.

Considering the rosette, the headstock, the bridge, and even the tortoise pickguard, this is a very simple and no-frills folk guitar. Yamaha preferred to focus on the essentials and decided to equip the F370 with die-cast Gotoh tuners. An excellent surprise, for the price. Moreover, they prove to be really pleasant to use, even if lubricated ones are smoother.

A small setback is that there's no strap pin, so people who play standing up will have to use a lace strap tied at the head between the nut and the tuners. It is just as effective and some people even prefer it over the pin strap, but it certainly wouldn't have increased the price much to give the choice to the guitar player.

The F370 has a short scale length (24.9"), which means less string tension than on longer scale necks, and therefore greater ease of play. In practice, the effect is not obvious, so in order to really appreciate it, we would have to compare it with another model using the same strings. The fretboard sports 20 properly placed frets, so you won't hurt your left hand when sliding on the neck. Underneath it you'll find the truss rod, accessible through the sound hole.

So we are dealing here with a neutral neck that allows all types of playing. Beginners will be reassured by the presence of markers between the frets and not only on the edge of the fretboard. The lacquer gives a nice impression, halfway between a thick, "sticky" lacquer and a smoother, satiny lacquer. No issues with the neck, even if it's a bit thick for my taste. It really depends on how picky you want to be. Nothing beats a personal test to see if it suits you well, even if you only know four chords.

The strings that come with the guitar are, as usual, of poor quality, so you will need to change them as soon as possible. You need to take that into account when assessing the recordings. The real potential of the guitar can only be determined using a good set of strings. I tested it in a shop, so I chose the examples with less background noise, to the detriment of the playing. 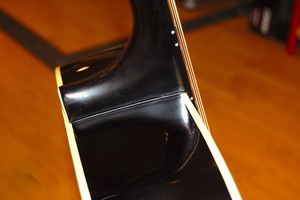 As you probably suspected, and it was even more evident during the test itself: This guitar is bright. Even too much so when you attack the strings heavily with a pick. Changing the original strings ought to make this excessive brilliance recede, producing more reasonable highs.

From a subjective point of view, I'd say the nato doesn't provide the same warmth mahogany would, even if low-quality. However, this Yamaha doesn't lack anything: The lows go deep enough and the presence of the instrument is absolutely correct. The sustain is also correct, without being amazing.

Nothing very flattering, but really useful to learn to play correctly.

As mentioned, the highs are too bright. And it exposes a double-edged effect: The good balance between mids and lows results in an accurate and neutral sound, but the "essence" of the sound shifts towards the high mids rather than the low mids. Still, it's a real treat to be able to have a correct and well-defined sound for $200! 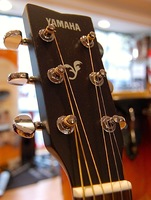 Even when finger picking, the highs are still quite present. Thus, you can make out the slightest details, but also the badly played notes (as my playing certifies). Yamaha classical guitars have a good reputation as practice instruments, and that know-how can be clearly found on this steel-string model.

Deep lows develop to their full extent and the lack of warmth we mentioned before gradually tones down when attacking the strings more softly.

Yamaha has created a very good practice guitar for folk fans on a budget. Its neutrality and precision are perfectly suited for beginners. The lack of warmth isn't really a handicap, except for those who want to strum away or who are looking for a "roots" sound. I therefore recommend it to perfectionists, who will enjoy its accurate sound. In any case, it is really worth the money.

Thank you to Paul Beuscher for having us in their shop.