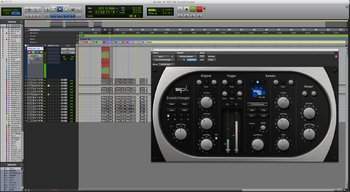 With the evolution of music production workflows, the trend seems to be to delay artistic and technical decisions of each production step as much as possible. On the other hand, recording techniques in home studios don't really allow users to get a fully satisfying result, which can be heard in the final production. Sound replacement tools have become a necessity when it comes to improving the sound of a recording or providing it a different frequency or dynamic response. That's why SPL developed the DrumXchanger, a mono/stereo plug-in available in VST, AU and RTAS formats, that allows the user to trigger a sound using another one. But as we'll see it later, the plug-in can do much more!

The DrumXchanger requires an iLok and it is provided with an additional file that includes a small sample bank so you can replace the recorded sound with SPL samples. Installing both files (application + sound bank) is easy and quick; you may install the sound bank in the directory you wish. When you run the DrumXchanger (I inserted it in a ProTools track) you see a... grea user interface! Nothing sad indeed: the DrumXchanger just inherited the visual characteristic of the Analog Code plug-in suite... It's true, it doesn't look very joyful — a bit more color would brighten up my session — but then again, we are here to work, right? What are we waiting for!

Five in a Row

The first thing that strikes you when the DrumXchanger opens is the intuitive layout of the different processing stages. In fact, the plug-in is divided into five clear and distinguishable sections, each of them with its own special editing and setting possibilities.

Basically, this first section allows you to access the sample editor. As I already mentioned above, the DrumXchanger is sold with a small sound bank that includes four easily accessible and fast-loading drum kits (each of them with one bass drum, one snare drum and four toms). This one gigabyte of sounds was recorded at 24bit/96 kHz, and each sound has five variations and 16 velocity levels. However, and luckily, you can load your own samples via the Editor window (see text box).

The Help button gives you access to a quick start guide. Although it is strongly recommended to read the user's manual in order to get the best out of the DrumXchanger, an overview of the main features of the plug-in always comes in handy. At the bottom there are four small buttons (A, B, C & D) that allow you to save four complete DrumXchanger setups. The use of this buttons is very simple: just click on the letter of the memory location you want to use and your settings will be saved. Once you are finished with your settings, you can copy them, select another location (B, for example) and paste them to the new location. You can then edit these settings and quickly toggle between both settings for A/B comparison. Well done! Finally, an Input control allows you to adjust the input signal level in order to manage the available headroom when you work with the plug-in. This control is crucial when the source signal level is too high or too low!

This section is dedicated to processing the original signal you want to replace. Maybe you are thinking "Why should I want to process a signal if I'm going to replace it?... Well, you are probably right but, as we'll see later, you can do much more than replace sounds with the DrumXchanger... The first two controls refer to a low-cut filter (20Hz-11kHz) and a high-cut filter (20Hz-22kHz). The Solo button allows you to listen exclusively to the signal you want to replace, which is very convenient considering you can process this signal...

Apart from that, you'll also find in this section no more and no less than a Transient Designer! Which means you can process the attack (+/-15 dB) and the sustain (+/- 24 dB) of the original signal. This is very useful when the signal has not enough punch (or too much punch) and when the response is too short/long... This section is extremely effective!

All these parameters affect only the original signal and are not aimed at influencing the signal detection process. However, you can assign the settings of the Original section to the sample detection function using the Trigg button. Thus, you can fine tune signal detection according to all settings (filters, Transient Designer, ducking...).

The Trigger section is in charge of everything concerning the original signal detection. A band-pass filter allows you to focus detection on the "usable" frequency range of the signal thanks to the frequency parameter (20H-22kHz) and the Q control (0.5- 50). A Solo button allows you to listen to the signal detected and to fine tune the (very accurate) filter settings. The Ext. SC (External Sidechain) button gives you the possibility to "help" the detection process using another control signal. For example, the signal of a mic in front of the bass drum can be processed using the signal of a mic placed inside the drum as control signal...

Besides this comprehensive parameter set, the DrumXchanger is also equipped with a double-detection process. In fact, two indicators coupled with two gain controls allow you to set the threshold point for signal detection. Like with most sound replacement tools, you have a level indicator to set the absolute value for the sample triggering threshold. To set it move the small green arrow to the desired level. The arrow lights on when the threshold is reached. I recommend you to place this arrow just below the minimum level you want to replace. A second red arrow (Rim) sets the triggering threshold of the rimshot sample selected in the Editor window.

In order to increase the detection precision, SPL added a second indicator (Trans) that shows the level of the transients. Imagine that, at the lowest levels, leakage level (additional sound sources you don't wish to record but are still picked by the microphone — for example. the hi-hat in the snare drum mic...) is louder than the level of the softest transients. This would result in unwanted triggering due to sounds that aren't the signal you want to replace. The Trans function allows you to solve this problem by focusing detection on the transients. Thus the sample will be triggered only if both Trans and Level indicators are reached at the same time. Very well done! Last but not least, the two gain controls allow you to adjust the level range required for detection to take place within a coherent dynamic range.

This section is divided into two sub-columns. The sample area shows a nice-looking drum kit above four small buttons. Click on each drum to listen to the sample that will be played. By clicking on each button you can toggle between the different SPL drum kits. Very easy! The name of the sample loaded is shown in a small window underneath it. To load another sample use the Load button, and to listen to it use the Play button. Up to now, everything's been smooth! When the threshold is reached and the sample is played, a small blue LED next to the Play button lights on for you to control triggering. Prev and Next allow you to browse the samples of the drum kit.

Underneath that, a Rim control has the same function as the red arrow next to the Level indicator. On the right, you'll find a Phase button to invert the polarity of the sample in case the original signal and the sample are out of phase. A Delay control (+/-3.5 ms) gives you the possibility to adjust the latency time for the sample to be triggered. Finally, a Dynamics control allows you to extend/reduce the dynamic response of the sample played back. It's almost as if you had a compressor/expander acting after the signal detection, which allowed you to follow the original dynamic behavior more or less faithfully.

The last section features two filters (high-pass and low-pass) that are similar to the filters in the Original and Sample sections. A Dry/Wet control adjusts the sample level depending on the original signal, which means you can actually mix two signals together (the processed, original signal and the sample) in order to optimize the level and sound character while maintaining a natural dynamic behavior. Powerful. Finally, the Output control adjusts the plug-in's output level. This apparently basic function becomes very useful when you combine a loud sample with a loud source signal!

I inserted the DrumXchanger into the bass drum and snare drum tracks of a recording session I made a few months earlier. I started with the drum kits provided by SPL. Here is a dry drum mix without DrumXchanger:

Below, you'll find several sequences where the bass drum and snare drum tracks have been replaced with the SPL samples, first mixed with the original signal (slightly processed), then fully wet.

I then loaded and managed my own samples manually, which is not very interesting in our example because the DrumXchanger does this quite well — as many of its competitors do. The DrumXchanger distinguishes itself from competitors by offering plentiful possibilities to process the triggered signal. In fact, you can replace a sound in a drastic way reducing its dynamic range so that the final result has the same dynamic response as the source signal. But you can also follow the dynamic and frequency response of the original signal while giving it another "sound color" and more accuracy. The dual-detection system is a great feature to get natural and faithful results. 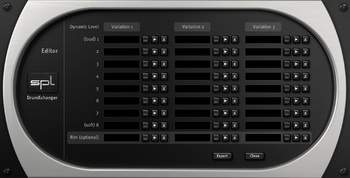 The Transient Designers in the Original and Sample sections are more than useful: they allow you to fully redefine the transient envelope of the original signal and the samples. The input and output filters are also very convenient because they provide accurate shaping of the frequency response to achieve a better mix of both signals. This way, you can easily keep the low-end of the original signal and use only the high frequencies of the sample to emphasize the attack of the sound... All triggering tools should include a Tune function, considering that tuning the sample to match the original signal is crucial. This function is much too rare in similar tools even though it's extremely useful and it was a good idea from SPL to add it to the DrumXchanger.

On the other hand, I found the delay setting not very practical. It took me some time to set it so that the phase response of both signals (Original + Sample) stayed consistent and the result sounded convincing. I find this setting not precise enough considering the importance of the phase response. I miss a setting that matches the plug-in's quality, i.e. a setting that is easier to adjust and with clear and precise indications.

Usually, I'm not a fan of real-time triggering plug-ins... I'm rather used to recording the processed signal and then mix this new signal with the original one from the recording session. The problem with this method is that I lose the advantages provided by the DrumXchanger's "internal mix" feature... It's a matter of choice! However, the number of parameters, the very effective dual detection and the clear and accessible user interface make the DrumXchanger a really awesome tool!

In a market packed with developers who constantly offer new triggering plug-ins, SPL distinguishes itself once again from with a sound replacer that provides really effective detection and sound shaping features. With a dual detection system, two Transient Designers, three dual filters, a pitch shifter, and a compressor, the DrumXchanger is much more than a simple triggering plug-in. It is a comprehensive sound processing tool that provides plenty of settings for you to always achieve the sound you need. At $199.66 + VAT, the DrumXchanger is a no-brainer!

A big thank you to John and the Contrepoint Studio team