Noise Gates Don't Have to be Boring

Have Fun with Noise Gates

A noise gate mutes its output with low-level input signals, but higher-level signals can pass through. Following are the typical adjustable parameters found in a noise gate, whether analog, digital, or plug-in.

All right, let's get into applications.

I was using a premixed drum loop from the Discrete Drums Series 2 library, but in one particular part of the song, I wished that the snare—and only the snare—had some reverb. Although Series 2 is a multitrack library, I didn't want to go back and build up the drum loop from scratch. So why not just extract the snare drum sound, put some reverb on that, and mix it in with the drums?

Referring to Fig. 1, I copied the drum loop in Track 1 to a second track in my sequencer (if you were doing this in hardware, you'd split it into two mixer channel inputs). In the second track, there's EQ inserted to roll off all the low end, which took most of the kick out of the signal, as well as the high end, to reduce the level of cymbal crashes. 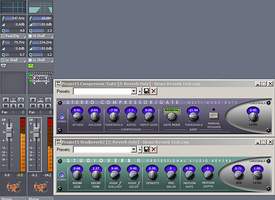 The next step was to insert a noise gate in Track 2, and raise the gate threshold so that only the snare peaks made it through (the screen shot shows a Compressor/Gate plug-in, but the compressor was disabled by setting the ratio to 1:1). These peaks fed the reverb, which dumped into the master bus along with the original drums. The end result: Reverb on the snare only, added in with the rest of the drums.

A similar trick works for situations where a drum part is not dynamic enough. Split the signal to an additional mixer channel, and set its gate so that only the peaks come through. Adjust this module's level so that the peaks add to the original sound, thus providing a boost only on peaks. This also works with any kind of percussive transient—pick noise on guitar, for example, or percussive B3-type transients.

Setting the attack and decay time to the minimum amount possible (typically 0 ms with attack, and anywhere from 0 to 10 ms with decay) can cause the gate to open and close so fast that it actually triggers on individual cycles of the input signal, causing distortion.

This technique works especially well with highly compressed drums; in this context, the threshold now becomes an "ugly" control. At low thresholds, you'll hear an occasional buzz. Higher thresholds can give mean, nasty, spiky sounds. (Note: if there is a minimum decay time, this will set a limit on the highest frequencies that will be affected. For example, with 5 ms of decay, anything above about 200 Hz will not be affected on a per-cycle basis.)

Check out a defenseless drum loop being distorted by this technique:

Adding some attack time in the 100-250 ms range allows a signal to "swell" to its maximum level. For instance, if you pause briefly between notes, when a new note exceeds the threshold it will fade in over the specified amount of attack time. This can alter the attack characteristics of percussive instruments like piano and guitar, or add "brass-like" attacks to organ sounds. Another interesting use is with vocals, to reduce breath inhale noises. As the singer breathes in, the inhale fades in. This makes the breath sound less prominent, but doesn't cut it out completely (which can sound unnatural).

However, for this application the decay time setting is also important. With a long decay, the gate may remain open during the space between notes, which prevents triggering a new attack when a new note plays. Conversely, too short a decay can result in the "chattering" effect described earlier. So, use the shortest possible decay time, consistent with a smooth sound.

Here's a trick for hardware noise gates. Suppose you want to augment an existing kick drum sound with a monster rap kick, like that famous TR-808 rap sound. Here's a sneaky way to do it:

Now whenever the kick drum hits, it opens up the gate for a fraction of a second and lets through the sine wave; the decay time then provides the desired fadeout.

This real-time performance tip can sound very cool with hip-hop, techno, and other types of music that rely on variations within drum loops. With most loops, the snare and kick will reach the highest levels, with (typically) hi-hat below that and percussion (maracas, shakers, tambourine, etc.) mixed in the background. Tweaking the noise gate threshold in real time causes selected parts of the loop to drop out. For example, with the threshold at minimum, you hear the entire loop. Move the threshold up, and the percussion disappears. Move it up further, and the high-hat drops out. Raise it even higher, and the snare and kick lose their decays and become ultra-percussive.

Listen to an audio example with a loop being processed by a noise gate in real time:

For this application, you want no attack time and a fairly short decay (about 50 ms). This can add really cool dynamics to a drum loop.

So who says noise gates have to be boring? Check out some of these techniques, and you'll have a whole different take on the little critters.