How to Set Up a Compressor

Parameters of a Compressor

In the analog era, the limited dynamics of mass-market music media (vinyl records, audio and video cassettes) didn't allow the accurate reproduction of classic and jazz orchestras (and even rock bands in the case of audio cassettes) when it came to dynamics. That's why sound engineers compressed the signal to avoid any distortion.

Now that music is converted into 16 bits, digitally recorded and sold on CD/DVD (or as a downloadable file), there is no such problem, since these media can faithfully reproduce the dynamics of almost any orchestra. The former technical limitations are gone and compression is not necessary anymore.

However, some sources (vocals) are still almost always systematically compressed, regardless of the music genre. So the goal of modern compression is to optimize the recording, either to try to make it more real and authentic or to create a less faithful but tighter, more controlled and powerful sound, or even a totally new one.

And to that end, the compressor uses a simple principle: it reduces dynamics by decreasing the signal output level when the input level exceeds a given threshold.

The ratio determines the amount of gain reduction applied to the signal that exceeds the threshold; the rest of the signal stays unprocessed. Depending on the compressor, the ratio can range from 1:1 to Inf:1. And what does that mean, you ask? 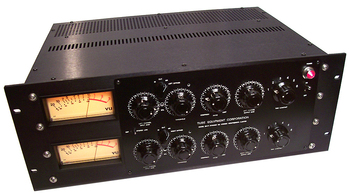 So the amount of compression applied to the signal is a compromise between the threshold and the ratio:

Depending on the compressor, you might also find additional parameters like, for instance, an input level setting instead of the threshold or a gain control (also called "make up" or output level) that boosts the signal to compensate for the gain reduction caused by the compression.

Release determines the time required by the compressor to come back to unity ratio (1:1) when the input signal drops below the threshold. Fast release times (a few dozen milliseconds) allow you to keep the vivid character of the source signal. Longer release times emphasize the sustain of instruments and reverberations, but they can lead to the compression of transients of subsequent peaks if they are too close. 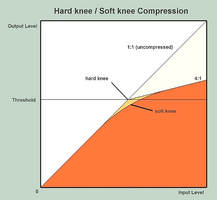