By Studio enregistrement Paris 18 MontmartreRecording on 02/22/2014

The Japanese brand had us certainly used to well-made products, rarely going beyond the $1000 mark. That was until the AT5040 with a price tag of $3000 came along. The manufacturer proclaims extraordinary craftsmanship (manufactured by hand with high-quality components only) and state-of-the-art technology, especially regarding the four-diaphragm capsule. Audio-Technica also alludes to the notions of "purity, realism and depth" of sound.

So, what could drive professionals to invest in the AT5040, which is more expensive than many of the most prestigious microphones around? 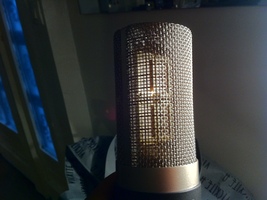 This mic was manufactured with the goal of delivering the most faithful sound possible. It sports a stunning capsule that features all the benefits of a very large diaphragm (higher output level and a high signal-to-noise ratio) without the inconveniences (the transients and high-frequencies are supposed to be optimal, unaltered by the size or the weight of the diaphragm). The outputs of these ultra-light capsules are summed to quadruple the sound level, while only doubling the amount of noise (rated at 5dB). 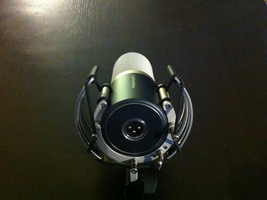 The AT5040 comes with a suspension shock mount with killer looks. Its tightening system is rather modern and surprising: you only need to put the mic in place and that's it, there's no need to tighten or lock anything! A much appreciated time-saver, especially since the mic remains perfectly isolated and in place. You'll also notice that there are no options on the mic itself: no polar pattern selector, no pad, no low-cut filter. It was a decision made by Audio-Technica with the goal of having the most pure and direct circuit possible. Any component that might affect the signal even if only by a nanodecibel was banned (that's why they used electret technology, which has the advantage of being simpler and less demanding than the others, especially in terms of voltage).

The AT5040 has an imposing grilled surface. When you are in front of it, you get the (naive) impression that it will capture a lot of sound. Which isn't far from the truth, actually!

We decided to compare the AT5040 with three other cardioid condenser microphones that are widely used in studios:

The mics were preamplified with a Neve 1073 DPD, and then converted with a Lynx Technology Aurora 16. The gain was adjusted in order to always have the same level when making the comparisons. 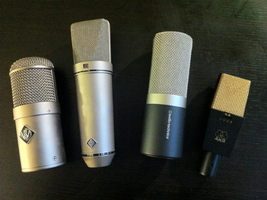 • Vocal take 1: The AT5040 seems to have a boost to provide it with more fullness and highs. It has a more consistent sound, with more presence than the other mics (at the same distance, obviously), without the sibilants being more aggressive (a feature highlighted in the user guide), as if it had an integrated mini de-esser. The CM7 FET has a less natural, less full sound than the AT (it has an interesting color with this type of voice, though, very vintage with a bump in the high-mids). For its part, the U87 has a slight dip in the low- and mid-frequency ranges, so the fundamental frequencies and first harmonics are less raw and full, which gives it a bit more presence and that velvety sound that characterizes this legendary mic. The C414 has less body, but it has that sharpness that makes it so popular for rock.

• Acoustic guitar: The AT is always very full, with rich highs and powerful lows. The sub lows are very present and pleasant, even though these frequencies are usually attenuated during mixdown. The U87 provides an elegant guitar sound, but with less fullness; however, the low end is more precise and less "muddy." The sound is more contoured. The CM7 is beefy and has very characteristic mids. The powerful (even intrusive) lows are there again but, unlike the AT, the highs are less nice and accurate. The C414 does pretty well on this instrument, it is closer to the U87 in terms of frequency response, but less delicate in the extreme highs (which makes the strings more accurate and incisive, but also more artificial). 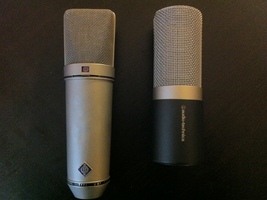 • Flute: The U87 is flattering, but not overly so. Its refined frequency response lets the instrument's character come through (smooth mids and a nice presence in the high end). The AT seems more raw, with more fullness once again, but its rich color is significant on the flute, although a bit less musical than the Neumann. For its part, the CM7 is more aggressive, more sibilant, less well-suited for this instrument. We find the C414 lacks balance and refinement, in comparison to the first two mics, which are truly excellent.

• Rhodes (amplified with a Vox AC30): The AT is rich in lows and highs but with a balanced overall result, which is noticeable on the Rhodes, a well-balanced and pure instrument in itself. The U87 has slightly less prominent lows (which is a pity, since people love the lows of the Rhodes!), the fullness of the instrument seems lighter. The CM7 sounds once again less natural, but with good lows. The difference between recordings is less noticeable than with other instruments..

• Kick (only U87 and AT5040): After having heard the previous sources, we already know that we will like the AT. It provides fat sub lows with a natural presence, which is very appreciated on a kick! The U87 is nice, but with less sub lows and lows in general. The AT promises a lot of power used as a "front kick" mic!

• Vocal take 2: The AT can put up easily with vocals at high SPLs, providing them a nice fullness and high end. The CM7 FET responds pretty well; the boost makes the vocals more open and aggressive, giving them an ideal color. The U87 seems a bit muffled next to the others. It doesn't seem to be particularly well suited for this type of singing. The C414 in interesting, it reveals the aggressiveness of the singer, even if it lacks fullness. We still find the extreme highs a bit artificial.

The description Audio-Technica gives of its deluxe baby is relatively accurate. It is a microphone that proves to be extremely effective to capture the richest possible sound close to the source. We found it very convincing on the vocals we recorded, but also on most other instruments. It gives sound a very modern color, which never felt inappropriate with any of the sources!
It's a direct competitor of microphones like the Brauner VM-1, considering its quality and price range (even if a bit less expensive), but without a tube. Let your ears be the ones to make the choice!