Yes, the bass guitar was born in 1937 — not 1951 — from the hands of the man who had already conceived the fist electromagnetic pickup for a musical instrument (launched in 1932 and originally used to amplify zithers, pianos and Spanish guitars). A forgotten genius, a good Samaritan took pity on double-bass players who always had to travel alone because of their bulky instrument: in those days, once the double-bass was in the car there was no space left except for the driver. The poor bass player had to drive by himself and "enjoy the road" alone, unlike the other members of the band who generally traveled together in the same vehicle. The name of the great inventor was Paul Tutmarc and even though he was more than one decade ahead of his competitors in the electric-music market, his business was a failure. He could never apply for a patent for his electromagnetic pickup at the end of the 30's because Bell had been controlling the exploitation of induction since 1875, when Alexander Graham Bell applied for his telephone patent. And the instruments Paul Tutmarc developed were only locally successful (his company was based in Seattle) and quickly forgotten. Nevertheless, he developed the first electric double-bass: the 1933 Bass Fiddle in cello format; and its little sister, the Bass Fiddle "Model 736" (1936), which had a more compact size (about 1 meter long) and was the first bass to be held horizontally.

As a consequence, Leo Fender was the inventor neither of the electric bass nor the electric guitar. The first amplified guitar is officially attributed to Georges Beauchamp in 1931, just before he founded the Ro-Pat-In Corporation with Adolph Rickenbacker. Called "Electro Spanish Guitar," the instrument had a hollow body and featured a piezoelectric system.

The first solid body guitar was "The Log," a prototype designed in 1940 by Les Paul that was never marketed.  So, give to Caesar that which is Caesar's!

However, this doesn't reduce the genius of the man from Fullerton who understood better than no one how to convert technological innovations developed by others into successful businesses — thus paving the way for electric music genres.

Leo Fender literally created the electric guitar market and was the first entrepreneur to venture a mass production strategy in a very small industry. His success is well deserved considering that he succeeded where most of his predecessors failed. Without the success of the 1950 Broadcaster guitar (quickly renamed "Nocaster" and later "Telecaster"), Gibson's bigwigs would have never recalled Les Paul who gave his name to the first solid-body guitar of the manufacturer (1952). The same thing applies to bass guitar: without the success of the Precision Bass, launched in 1951, Gibson would not have developed the EB-1 (1952) and Rickenbacker its Model 4000 (their first bass guitar) whose design was motivated by the success of the '57 Precision Bass.

One year after World War II, after a brief cooperation with Clayton Orr "Doc" Kauffman —an inventor formerly employed by Rickenbacker (he designed the ancestor of the tremolo bridge)—, Leo decided to go solo and called his new company "Fender Electric Instrument Company." He stopped repairing audio gear to dedicate himself to designing lap steel guitars and amplifiers. Leo was ambitious and quickly understood that he would earn more money by manufacturing products rather than by servicing them.

From 1946 to 1948 the company launched rugged amplifiers (Princeton and Champ). Considered the amps with the highest output power on the market, they were a great success. The arrival of George Fullerton to the company in 1948 would be decisive in the success of the brand. He started designing a solid-body electric guitar with Leo Fender. However, they didn't take their inspiration from the Rickenbacker Electro Spanish Guitar nor from Les Paul's work but from a much more recent concept. 1947, the great Merle Travis (a famous man in the world of country music and guitar picking technique) sketched a new guitar and asked Paul Bigsby to manufacture it. This solid-body guitar, the first ever, was the first official influence of the future Fender Esquire, a totally new instrument that started to be mass produced in 1950.

Afterwards everything went faster: the Esquire became the Broadcaster (with a truss rod added in 1950), and then the Nocaster. The famous Telecaster appeared in 1952 (this new name of the Nocaster is a tribute to the upcoming media). But let's go back to our four-string guitar, considering that the Precision Bass was born at the same time, in November 1951 to be more precise. With the success of his guitars, Leo's company would become legendary and, at the same time, the stepping stone for a new generation of musicians: ours! Happy birthday grandma! Who wants some birthday cake? 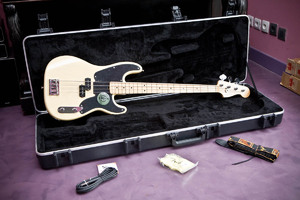 As usual, I was strolling around the Parisian district of music shops looking for inspiration for my fingers by trying out different instruments.

The shop assistant was unpacking products while I was busy leaving my fingerprints on different high-gloss finishes.

I am one of those persons who likes work, especially when it is done by someone else. And doing this in this shop, where I also unpacked several tonnes of gear, was a real joy. So, I was sitting there with an empty look and a bass guitar in my hands when the shop assistant picked an instrument out of its bag to put it on the display. If you had only been there, my friends! If you had seen through my eyes at that moment, I'm sure that you would be the one writing this review instead of me...

A wonderful blond with a vintage look, so marvelous that it could light up a dark stage. An instrument you can already hear before even touching it. In a positive way, of course (because this also applies to cheap instruments that look awful and sound awful). 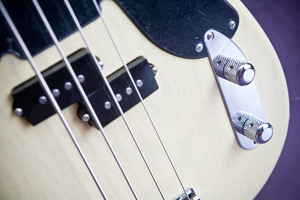 l like the shape of the "vintage" Precision Bass. In fact, I always preferred the Telecaster shape to the Stratocaster, which was adopted as the standard for the bass guitar range of the manufacturer in 1957. On the other hand, I prefer the dual split-coil pickup to the original single-coil one. So, this bass guitar was made for me!

I repeat it to be perfectly clear: this anniversary instrument is no reissue but a hybrid bass guitar. It combines a vintage look with modern components, for example a string-thru-body bridge, graphite fingerboard reinforcement, and a modern truss-rod access (on the 1951 version you had to remove the neck to set the truss rod). The front and back edges of the body are rounded and beveled (a serial modification that first appeared in 1954) to ensure enough blood circulation in your right arm and to avoid your tendons from crushing after long hours of playing.

The output uses a tubular plug socket instead of the original connector. The Hipshot® tuners are open and the nut is made out of synthetic bone (this component replaces the '53 classic nut that was carved from Bolshevik bones... back in the times of McCarthyism). The flight case is also modern: you get a SKB case, the same as for the current Fender Standard US and Deluxe US instruments. I would prefer a tweed case even though I must admit that the SKB is more practical and lighter.

The electronics are standard passive with volume and tone controls. I connected the bass directly to my audio interface using a cable with standard TS jacks. But before finishing the introduction, I would like to express two regrets:

Let's start with the handling. The neck and its dimensions belong to modern standards: 34" scale length, 9.5" radius and 1.75" nut. In other words, you get the neck of a modern Precision Bass. Rather thick but easy to play and suitable for any hand. And considering the size of mine, I'm speaking on behalf of the most unlucky of us!

The weight of the instrument seems light to me, long live swamp ash! Did you notice that I didn't mention the weight? I didn't take the time to weight the beauty — call me unprofessional. Do pardon me: in the future, I'll try to be less subjective and absent-minded.

The bass is well balanced when played standing, and it coils up lovingly against your body when you're sitting. As for the right hand, you can use the dual-coil pickup to rest your thumb (or not). If you move your right hand along the body, for example next to the bridge, you will find no support. This is quite normal for a standard Precision Bass but had to be mentioned. In finger picking style, I personally put my hand above the pickup or on the neck. With a pick just put your hand on the strings and move it to the correct position.

As for the sound, I recorded a variation of Psychedelic Sally because of the various styles it includes (and not because of the quality of my playing). The choice of this song is a tribute to Lionel Hampton who was the first big band leader to choose an electric bass for his tours in 1951. Originally, the composer/percussionist forced his double-bass player William "Monk" Montgomery to play bass because this instrument was easier to hear on stage than double-bass. Roy Johnson, Monk's successor was also a pioneer of our favorite instrument.

Listening to the sound samples you'll notice the perfect signal isolation. The split pickup does a good job: neither hum nor noise is audible even when the tone control is turn fully on. Below, you'll find four takes played with my fingers to illustrate four different tone settings.

With the lows at max, the tone is round and attenuates a bit the dynamic of the maple fingerboard. My favorite sound is produced when the tone control setting is between two thirds and halfway. The sound is both deep and well-defined, especially in the highs and hi-mids. You could say it's precise. This setting is very versatile and convenient: it's ideal when you want to get an effective groove with a sound character that a wide audience can recognize. When you turn the tone control all the way up, you get a clean and punchy tone. This sound is good for playing rock with a pick and the sound emphasizes the percussive qualities of the fingerboard wood.

If you like hitting the strings with your thumb and pulling them, the Precision Bass shows the limitations of its single neck pickup. No miracles for slap players who will surely prefer the Precision's younger sister: the famous Jazz bass with its pair of pickups.

As a summary, my personal opinion about the timbre of this lady is that it sounds like an excellent Precision Bass. I hope the simplicity of my judgment will be understood among fans of this classic: you can run to your dealer and try it out. Players who don't especially like Leo Fender's standard or who prefer a Jazz Bass, won't be converted to a new religion. But give it a try anyway, trying it out is free! Personally, I had a lot of fun playing this bass, which will nevertheless make you a bit nostalgic: how many technological improvements in 60 years! Intelligently upgraded old recipes will always succeed. With the same philosophy in mind, Fender also offers a 50th Anniversary Jazz Bass that makes me curious. The price of this lovely Precision Bass is somewhere between 1,350 and 1,500 euros with the case, a strap and all accessories you need to adjust the instrument. I wish a beautiful summer to all readers!