What Are The Knobs On A Guitar For?

How To Adjust Guitar Knobs Correctly

The following explanations are valid for most electric guitars, regardless of the pickup type used. Obviously, if your guitar has only one knob, your settings will be reduced to its most basic expression.

Capture sound at the source

Here's an image series depicting the two most frequent pickup toggle switches (on an SG and a Stratocaster in this case).

Gibson thought it was a good idea to label the switches to make using them more intuitive, the problem is that they don't really correspond to their use in praxis. The Rhythm label was justified back in the rock 'n' roll era (that of Guitar Slim not Boyz II Men), but the times have changed and nothing stops you now from playing a rhythm guitar in Treble position (metalheads love it).

So, in short, do not hesitate to try out all positions of your toggle switches to find the one matching your riff. And, if needed, you can even change positions during a song.

Pump up the volume 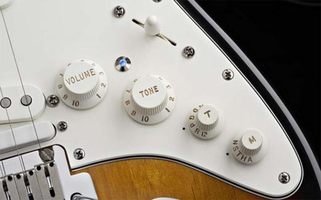 No tricks here, the volume control allows you to adjust the output level of your signal. But, unlike your amp's gain setting, the best signal-to-noise ratio will be achieved with the pot all the way up. If you have more than one volume knob, it means each controls a pickup. Middle positions can be useful with amps that don't have too much power and distort very easily or to get a crunch sound with a fat saturation. We can also use it as an effect by turning the knob progressively and playing a chord to make it appear (or disappear).

The Tone knob is basically a filter to cut highs. And, once again, the pickup will sound best when turning it all the way up. With the ever-growing amount of effects amps have to offer and those available in pedal format, we often forget that this setting even exists. This basic control allows you to, for example, smoothen a jazzy sound or choke a way-too-shrilling fuzz, or anything else in that line that comes to your mind. Only your ears can tell if the sound is convincing or not!

As well as a bunch of other options that, in my opinion, a beginner doesn't need.

Let's finish with a practical example of how to use and make the best of the controls on a guitar. Having previously set the neck pickup's volume to 0 and that of the bridge to max, Tom Morello plays with the toggle switch (on the eighth note) to manually "cut" sound in this memorable intro: