Q: How many mic inputs do I need?

A: Do you see yourself recording with more than two microphones at a time? If you do, or you think there’s a chance you will in the future — for instance if you envision yourself recording a band with drums — then you probably want an interface with eight inputs. Ideally it would be eight mic inputs, but if it's a combination of mic and line inputs, you can use external mic preamps through the line inputs. If it has an ADAT optical input, you could expand it with an additional ADAT-equipped interface to add even more mic channels to your system.

Q: Do I need a portable unit?

A: This may be dictated in part by the answer to question 1, as interfaces with more than two mic inputs usually come in rackmount format. Although there’s no rule that you can’t carry a rackmount unit around with you to use with a mobile laptop-recording rig, they're not as easily portable as tabletop models.

If you answered yes to a portable unit, the second part of the question is: do I need one that’s bus powered? A unit that runs off the USB bus gives you added freedom, because you don't need to plug it in to an AC outlet. Coupled with a laptop and a good mic, a bus-powered interface could give you a great field-recording setup. There are even some single-channel bus powered interfaces for Mac that also work with iOS devices.

Q: What about connectivity formats?

A: At the moment, the only format you can be sure will be on a new computer is some form of USB — most likely USB 2.0 or 3.0. FireWire (or FireWire 800) has been the de facto format for audio interface connectivity, but it’s no longer included by Apple on its computers, and is becoming a thing of the past. Thunderbolt is a robust new connectivity format that’s on many new computers, and there will be more and more Thunderbolt interfaces available as time goes on.

A large number of the interfaces currently on the market are FireWire-based ones (FireWire 400 or 800), but many can be connected to Thunderbolt-equipped computers using a FireWire-to-Thunderbolt adapter. If you’re looking at a FireWire interface, check its Thunderbolt compatibility. If it will work with an adapter, your purchase will be future-proofed to some degree. Think about how soon you’ll need a new computer, because if you’re going to be replacing yours soon, you want to be sure the interface you buy will work with the new computer. Some interfaces offer more than one connectivity format, which can be a useful feature from a longevity standpoint.

Another option for an interface is to get one that’s in the form of a expansion card, that connects inside your computer. Some come with breakout boxes that have the I/O on them, on others it’s on the edge of the card that faces out the expansion slot. You’ll find that there are less choices in card-based interfaces. 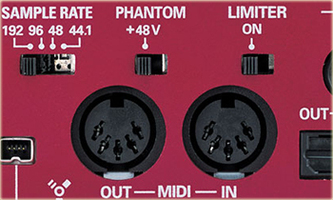 Q: Should I get an interface that’s bundled with software?

A: Most bundles of that variety come with “light” versions of a particular DAW, which may be fine for a while, but you’ll probably outgrow eventually. Find the hardware unit with the features you want in the price range you can afford, and if it comes with software, it’s a bonus.

Q: Should I spend the extra cash to get a professional-caliber interface?

A: If you’re new or relatively new to recording, the answer is probably no. Even a fairly inexpensive interface that records 24-bit audio is going to sound pretty good. Nevertheless, just like with any product, you get what you pay for. The key components that affect quality in an interface are the mic preamps and analog-to-digital converters. I would avoid really low-priced interfaces, if at all possible. If you want to future proof yourself, consider starting with a midrange unit (roughly the $300-$500 range, depending on channel count), which will feature better quality components, and give you some room to grow. 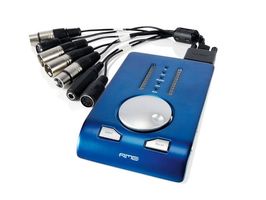 Once you‘ve figured out the features and format that you need, take some time to research what’s available in your price range. Read reviews, both user and pro (we’ve got plenty of them here at Audiofanzine), talk to friends and other musicians, and take your time to make your choice.

I would recommend that at a minimum, whatever you buy should support 24-bit audio, and offer direct monitoring and phantom power.

Finally, if you can swing it, spend a little extra to get something that you can grow into. You want to end up with a unit that you’ll still be using and enjoying a year or two from now.