How to Make Good Use of Presets

As I already mentioned in the chapter dedicated to EQing, the main problem with presets is that the creator of the preset knew absolutely nothing about the signal you want to process. Furthermore, he or she couldn't read your mind and, thus, had no clue about what was your vision for the mix you're working on. However, unlike with EQs, that's all not that bad with dynamics processors, as long as you take some precautions...

While it's impossible for anybody to pretend to perfectly master the spectral content of a signal he or she has never listened to, it's a bit different when it comes to considering exclusively the dynamics of a well-identified instrument. In fact, if an electric guitar is correctly played and recorded, the impact of the way a musicians plays is, in a way, "minimal" regarding signal variations at the microdynamics level. Actually, a guitarist playing a funky rhythm part or a power chord will sound similar to another one playing the same. The distinction between the signal's attack and decay will be almost the same. So, chances are a preset aptly named "Power Guitar in your Face" will have adequately set attack and release times when you want to process a power guitar in your face, as long as it was conceived by a designer worthy of the name. Without going into any technical details, the same applies to the ratio and knee settings, and they should work more or less the same. Obviously, if it works for a guitar, it also works for any other instrument, as long as the preset is clearly designed for the purpose. But don't put words in my mouth, I never said the settings (time constants, knee, ratio) would be perfect. My point is that presets can be an excellent starting point and won't require too much time and effort to get a satisfactory result. 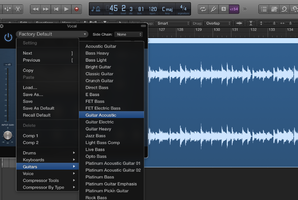 What are the precautions I mentioned in the intro?

Well, there are several ones, but the single most important one has to do with the threshold level. The creator of the preset couldn't possibly know when the signal you are processing "attacks" the plug-in. Consequently, the threshold of a preset is set in a more or less arbitrary way and, hence, won't be appropriate most of the times. To avoid such inconveniences, the first thing you should do as soon as you load a preset is to set the threshold to 0dB. Now start playback and set the threshold according to your needs. That may sound simplistic, but trust me, it makes all the difference in the world!

Another thing you should consider is the filter section of the sidechain. I don't think it's necessary to linger on the topic after what we said about it in the EQing chapter. But here I go again: The creator of the preset had absolutely no clue about the spectral content of your signal, so the filters are set at random. And it's up to you to adjust them to your signal.

Finally, if a preset messes with the dry/wet setting, you will most probably have to readjust it.

To finish, I would like to mention a couple of things. First, I wrote this article with compressors in mind. Nevertheless, all of this applies to noise gates, too. Second, even if the presets of dynamic processors can prove adequate, I still encourage you to take the time and explore yourself the settings that suit your signal best. At the end of the day, this is the best way for you to hone your skills and win confidence, which will not only be good for the production you are currently working on but also for all the ones to come.