How to find inspiration when you're stuck in a rut

Motion synths get the ideas flowing

If you’re writing pop, rock, R&B, hip-hop or especially EDM, a great way to get your creativity stimulated is to find synth sounds with movement in them and let them inspire you. Open up your favorite soft synth in your DAW, and look for patches that are referred to as sequenced, tempo-synced,  motion, or looped, and you’re going to find sounds that play in rhythmic patterns. All you have to do sometimes is to hold down a key or chord and you'll find the groove of the patch takes you somewhere creatively. You may even end up using that sound as an important element in your composition or song.

Some synths have entire banks of sequenced sounds. For example, in Rob Papen’s Blue II, if you pull down the preset menu to “Quickly Browse,” you’ll see banks for Sequence Sounds and Tempo Based sounds, which provide over 100 motion sounds in each category.

I've included some examples of the general type of sounds I'm talking about. 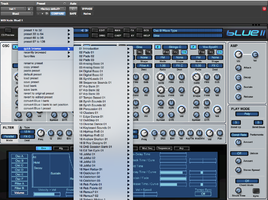 Here's one from Rop Papen's RAW synth, for which I played just a few held notes in octaves, building up to three notes total.

Even if you're not an accomplished keyboard player (which I'm not) and are just playing simple patterns, these sounds can still be very inspiring. Arpeggiated synth sounds are another type that can give you ideas, although their patterns tend to be a little stiffer and more repetitive than sequenced synth sounds.

Complex synth atmospheres and textures that develop over time can also get the imagination going. Here’s another example from Blue II. In this one, I'm just sustaining a chord and adding a couple of additional notes as it goes on.

As you might imagine, loops are also helpful for getting the creative juices flowing. Let’s say you were trying to write something with a funk groove. If you listened to a number of funk drum loops, it might spark a melodic or harmonic idea. Whether you’re writing on a keyboard or guitar, having a beat to play along with is often what you need to find inspiration.

For example, if I was playing my guitar along with this funk loop from Logic Pro X, I'd likely come up with a lot of ideas.

Drum loops aren’t the only types of loops that can inspire you. Percussion loops work great, as do instrument loops of many types. Apple’s Logic Pro X has perhaps the premier DAW-based loop collection, and lets you easily choose and play loops in a variety of instruments and styles.

You could even use a vocal loop, such as this one from Logic for inspiration:

Sometimes, all you need to do is relax and play your instrument for a while to develop ideas. If you can get past the point where you’re constantly thinking about your writer’s block, and just get into the zone of playing your instrument, great things can happen.

Set up a track in your DAW, and plug your instrument in (or set up your fave virtual instrument if you’re a keyboard player). Perhaps add some lush reverb if needed to enhance the creative atmosphere. Sit back and just start playing. It’s useful to leave your DAW in record while you do this (but try to forget about the fact that it is). That way, if you’re playing something that sparks an idea, it’s already recorded. No need to try to remember it and then record it. I’ve had occasions where I played a really cool riff or figure, and by the time I got my DAW or recorder going, the idea was gone.

Yet another method for breaking out of a creative rut is to listen to a lot of music, especially in the style you’re trying to write in. Don’t get me wrong, I’m not advocating plagiarism, I’m just saying that listening to similar material can open up your mind and give you ideas.

It's often helpful to listen to music outside of your collection, such as you can do on a streaming service like Spotify (see screenshot to left), even the free version. Start with one artist in the style you’re looking to write in, and then go to the links to similar artists. At worst, exploring like this can expose you to cool new artists, and with luck it will also inspire your writing.

Sometimes, the best ideas happen when you’re not trying to write at all. Especially when your mind is relaxed and not concentrating on music, such as when you’re taking a shower or driving, ideas sometimes just pop into your head. Use a portable recorder or smart phone to record the idea before you forget it (wait until you get out of the shower, or stop the car, of course). I once got a great melodic idea while driving, and had no recorder with me (this was before the days of smart phones), and had to sing it over and over in my head until I got where I was going and was able to write the notes down on paper.

If you've hit a dead end and aren't coming up with any musical ideas, the tips in this story can help you break through. It's important to try not to get too frustrated. The more chill you are, the more likely you'll get inspired. Good luck!