If it Ain't Broke, Don't Fix it

Unlike the lows and low/mids, the frequencies between 500 Hz and 6 kHz don't need to be trimmed down for every instrument. So you'll have to go track by track to see which ones really need it. Here's a brief guide to know which frequency ranges to focus on, depending on the symptoms detected:

I know I'm repeating myself, but remember you shouldn't go about it in a systematic way: Why fix it if it ain't broken? 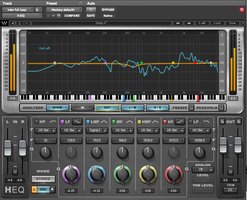 Regarding the high frequencies, between 6 kHz and 20 kHz, I recommend not touching them for the time being, since the situation is pretty delicate at this stage. The most daring among you can amuse yourselves attenuating the vocals between 6 kHz and 8 kHz in a very targeted fashion, meaning with a very narrow bandwidth (high Q), in order to reduce invasive sibilants. However, a dedicated processor (De-Esser) will often give you better results.

You can also placate an instrument that is too brilliant by focusing on the 8 kHz to 16 kHz range. Finally, if you want to reign in a sound that's too airy, a shelving filter beyond 16 kHz ought to do the task. But be careful not to go to hard on it or you risk EQing the life out of the sound.

And what about giving it all a boost?

Don't worry, we'll get there! However, I invite you to give a good listen to the mix after this trimming session. Compared to the result from the rough mix, you should notice that things are starting to take shape. Little by little, the different elements start to find their natural place in the sonic puzzle. For example, the guitar you thought was a bit dull should now be much less present, the vocals should now feel much more comfortable, etc. And all that without boosting anything! That's a good thing, because boosting in certain frequency zones can make a mix sound unpleasant and fatiguing.

The forthcoming episode will be dedicated to the next logical step in EQing: How to remedy the masking phenomenon.