Into the Gray Zone

This zone I call low/mids is very important for several reasons. For starters, if you take a look at the frequency chart I shared with you last week, you'll notice that the root frequencies of 99% of the instruments live in this zone. In fact, chances are the song you are working on is particularly busy in this region of the frequency spectrum. That's why you need to pay special attention to it. 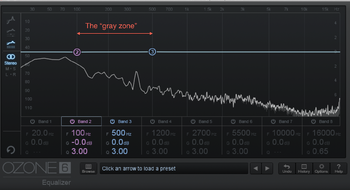 On the other hand, recordings are ever more frequently done with cardioid mics using close-miking techniques, and even more so in home studios. While this technique does offer some advantages, it has a major drawback you have probably heard before: The proximity effect. Placing a cardioid mic very ─ and frequently too ─ close to the source results in an excess of lows and low-mids, which isn't very musical. The work you carried out on the bass frequencies last week has already attenuated this phenomenon, but it's certainly not enough. That's why we'll finish the job today addressing that famous "gray zone" between 100 Hz and 500 Hz.

Do note, however, that this part of the frequency spectrum is particularly sensitive, and it also has a significant influence on our subjective perception of sound. Thus, when this zone is well-balanced, people often refer to it as the "fullness" of an instrument, the warmth of a recording; and when it's too crowded, it renders the sound confusing, as if it were a tangle of frequencies. By clearing up this zone, you get a sense of clarity, but if you are not careful, sound can quickly become "thin."

As you have surely understood by now, there's quite some work to do, so let's get on with it!

As usual, there are no rules. It's impossible for me to assert that for such or such instrument you must cut "X dBs" at this or that frequency, simply because I have no info on the instruments used for the song you're mixing, how they were recorded nor the sound you want to achieve. This means, it's up to you to track down the undesirable frequencies for each track. To do that, you can use a method that is as old as the world: Frequency sweeping. 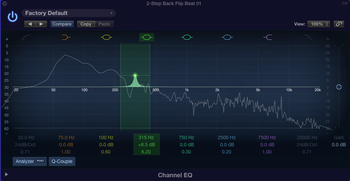 This technique is very easy to use, you simply need a peak filter with a relatively narrow bandwidth (Q factor higher than 4). Start by applying an exaggerated boost (between 6 dB and 9 dB, but be careful with your ears!) and sweeping the region between 100 Hz and 500 Hz. With such a filter, nothing will sound like it should. However, you'll notice that it will make some things particularly unpleasant. Bingo! That's the zone you need to attenuate. But be careful not to overdo it, in order to preserve the naturalness of the recording. You should cut from 1 dB to 3 dB max, with a Q factor between 2 and 4, but bear in mind that the more you attenuate, the higher the Q factor ought to be.

When listening back to it, you may not be able to actually hear the difference produced by such a moderate attenuation on a single instrument. But do the same for all tracks and then do an A/B comparison bypassing all EQs at the same time...Combined with the cleaning up of the low end you had previously carried out, the improvement ought to be flagrant. The pieces of the puzzle start falling into place!

Next week we'll see what needs to be done for the rest of the mids and the high end of the frequency spectrum.