It's Just a Matter of Feeling 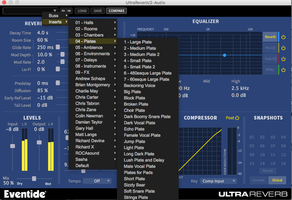 I like to think that reverb is to music what scent is to the unconscious. And if you think of it, this analogy is pretty logical. Just like reverb, a scent is intangible, since it doesn't really have a material existence in itself. For a scent to exist there needs to be an emitter, a propagation medium and a receiver. In nature, there is no reverb per se until a sound excites a given space and someone listens to it. Moreover, scents have a privileged and almost direct access to your memory and emotions, not to mention the direct impact they can have on your body. In fact, I bet the simple mention of the scent of beloved grandma, an old book, a brand new car, a forest, or even recently mowed grass, is enough to make anybody get the point — besides bringing back to mind some sort of memory. And even if smells stir different emotions in each of us, there is without doubt a link between them and the emotions they are most likely to arouse in all of us. The eventual body effects are also unquestionable. I, for example, get abdominal spasms whenever I'm in the presence of bunch of lavendar...but I'm digressing here.

So, I was talking about reverb. Just like scents, reverb is deeply ingrained in the collective unconscious. It is an essential part of nature, so, in this way, it's like a living aspect that can "dialog" with our animal nature. So, apart from suggesting a given acoustic space, reverbs can also convey other information to the listener ─ a given period, an environment or even a mood ─ in a very subtle, but nevertheless real way.

As a consequence, when you choose a preset you should always consider the message and/or emotion you want to transmit. To take the metaphor to the limit, imagine for a moment a beautifully dressed girl smelling like a fishwife after a hard day at work, an old wreck smelling like a brand new car, or a boxer that smells like roses right after getting off the ring...It just doesn't make any sense, does it? Well, the same applies to reverb and music, so you'd better always bear it in mind. Hey, but don't get me wrong: the use of an unexpected reverb for a given song can result in very interesting ─ and powerful ─ stylistic effects, if well done. My sole intention here is to make you aware of the fact, so that when it happens it's completely voluntary not just a fortunate accident.

To sum it up, whenever you choose a preset, consider the emotions you want to transmit, the feeling you want to give your production, and then try to translate that from a a frequency point of view. Does the song have a somber or sparkling mood? A closed or open feeling? A modern or dated atmosphere? A lively or sluggish groove? These are the sort of questions you need to ask yourself to be able to choose the right preset.

And then? Well, that's something for the next article...