Reverb In or Aux?

If you are not familiar with the differences between insert and aux effects, I invite you to read this excellent article  written a couple of years a go by one of my colleagues here at Audiofanzine.

When it comes to reverb, the use of auxiliary buses is preferred. And there are several reasons for that. First of all, this allows you to send several tracks to the same reverb plug-in. Besides sparing useful CPU resources ─ and God knows reverb plug-ins can be quite resource intensive, the use of a reverb on an aux bus has the added advantage of making it easier to achieve certain effects, like adding sonic cohesion between the different elements in a mix. 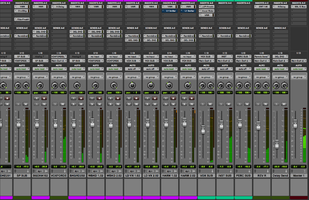 At the same time, using a reverb as an aux effect also simplifies the task of setting a balance between the source and reverb signal for each instrument, because you can do it via the channel aux sends. Using an aux send is easier than having to open the reverb plug-in on a channel insert to adjust the wet/dry ratio. By the way, it's important to note that if you use the reverb on an aux bus, your reverb plug-in should be set to 100% wet, otherwise you'll end up with some of the dry signal making its way into the mix through the aux bus, which isn't a good thing.

Along the same lines I've stated above, the use of an aux bus reverb also makes it possible to control the amount of reverb going to all the channels at once, by simply adjusting the volume fader on the aux bus that the reverb is on. Compare that with having to open and adjust, one by one, the reverb plug-ins inserted on individual channels.

Finally, another advantage of an aux bus in relation to an insert is that it allows you to process the reverb signal independently of the sources. As we will see later on, it can prove extremely useful to EQ, gate and even compress a reverb.

All that said, sometimes it might be wise to go with a reverb on an insert. For example, if the reverb is only aimed at one single instrument there's no need to add an auxiliary track to your virtual mixer just for that. And even more so if the reverb is specifically used only on a couple of bars as a sort of effect.

So, in most cases, I would recommend you to use the more versatile option of an aux bus. However, this way of doing things implies yet another routing issue... which is something we'll discuss in the next article.