When you decide to send the signal of a channel to an aux bus, most DAWs give you the possibility to do it pre- or post-fader. And, obviously, you should be aware of what both of these options entail, to make the best decision. 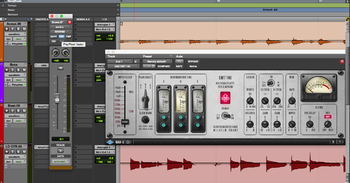 If you take the pre-fader route, any changes in level you make on the source track via the channel's volume fader will not affect the reverb signal. In fact, the latter will remain constant with regards to the Send level, since it is the only control determining the amount of signal sent to the aux bus. If you were to use automation on the track's volume, for instance, the reverb level would remain the same, which would entail a change in ratio between the source and reverb signal in favor of the latter. This isn't necessarily a bad thing, quite the contrary! That said, it's something you definitely have to be aware of to avoid ugly surprises. Along the same lines, if you tweak the pan pot of the track, it won't have any effect on the reverb signal, since a pre-fader send is also pre-pan.

On the other hand, even if it's not the case with all DAWs, the channel's Mute and Solo functions usually don't have any effect on the aux send when set pre-fader. So, imagine you have a piano track feeding an aux bus with a reverb on it via a pre-fader send. If you were to mute the piano track, you'd still be able to hear the piano reverb together with the rest of the mix.

Finally, you should also know that some sequencers offer the possibility to make the pre-fader signal pre- or post-insert, too, which might prove very interesting in some cases, as we will see later on.

Now, when it comes to post-fader sends, the story is completely the opposite. In this case, the signal is taken post-insert, post-pan, post-solo, post-mute, and ─ obviously ─ post-volume fader. This means that any modification of these settings will affect the aux bus. Which is usually what you want to happen when working with reverb. Thus, I recommend you to adopt post-fader sends for this use, except in very specific cases we will address in future articles.

Join me next week to discuss the different types of reverb.