Noisy or not noisy

Noise is everywhere, that's a fact. Even while you are in the comfort of your home, there's always some background noise reaching your ears. Be it the buzz of the fridge, the sounds of the street or the singing of the birds, it's impossible to escape noise. But you know what? That's good so, in so far as your brain perceives these kinds of noises as something natural. To the point that all people who have experienced absolute silence agree that it can be quite perturbing. As a matter of fact, I had the opportunity to sit in an anechoic chamber once. I was the only sound source. After some time in absolute silence I started to hear some creaking at irregular intervals...In the end I realized the noise was produced by my eyelids when I blinked. I guess that, in the absence of background noise, my brain wanted to cling to something and, besides my heartbeat, that was the only thing there was. It's crazy, isn't it?

So, in short, noise is everywhere and it's quite normal. Hence it's no wonder that it comes up regularly in the audio world. When you are recording, the mics can capture the noises surrounding you. But that's not all. The devices used to record (mics, amps, converters, etc.) generate noise, too, which ends up in the takes. And even more noise can be added to the recordings once in your DAW, due to quantizing, dithering, etc. Granted, a perfectly controlled audio signal chain and digital signal processing can drastically minimize these noises. But, as imperceptible as they may seem, the sum of all these noises during mixdown can become a big problem. Enter the noise gate.

Dialing in a gate to attenuate these background noises is much more complicated than it seems. And, unfortunately, there are no blanket rules that apply in this case, since it all depends on the source signal. However, if there's something that never changes when using a noise gate this way is the position of the gate in the processing chain: it should always be placed on the first track insert. You'll agree with me that it's better to get rid of all noises before applying any processing to it (EQ, compressor, etc.), which could end up amplifying such noises. As for the rest, I can only give you some very basic tips. 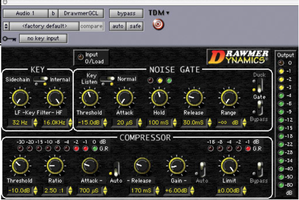 You should obviously set the threshold right above the background noise and below the faintest portion of "useful" signal. The attack ought to be fast enough in order not to alter too much the natural transients of the signal being processed, but not so fast that it produces audible clicks. And more or less the same applies to the release: it has to be relatively fast so that the gate closes quickly enough to not let any noise through, but slowly enough to preserve the natural decay of sounds. If you are having a hard time dialing in the time constants, I recommend that you experiment with the Range parameter. By applying a whopping Range of -80dB, for example, the effect of the gate will be obvious to the ear. On the other hand, with a moderate Range of a couple of dBs, it will go unnoticed. True, you will attenuate less the noise, but is it really that bad?

After all, as I already explained before, background noise is quite natural, so why not leave some of it in? If the signal-to-noise ratio is reasonable, there's no reason to worry too much about it. To finish, let me remind you that the "current trend" is to add background noise with vintage gear emulations, like tape machine emulators, for instance. It provides a certain "old school" touch to the production, if well done. But, as always, it's all a matter of taste.

Next week we'll see how to use a noise gate to deal with mic bleed.