Instead of wasting time describing the different parameters of these nifty toys, I will approach the subject in a much more practical way, and even philosophical to a certain extent. That's why I would like to refer you to this somewhat old but nevertheless excellent article published on your favorite website, where you can surely find an answer to your questions regarding this or that parameter. Once that's been cleared, let's move on...

If you have been following this article series from the beginning, you have surely noticed that I'm the kind of guy who likes to explain things rather than just go "do it like this and don't ask why." Consequently, before rushing into the hows, I would first like you to ask yourself why. And when you think of it, the answer is relatively simple. Reverberation is everywhere in nature! Whether it's produced by sound bumping into a wall or "silence" bouncing of the surface of a lake, we are inevitably surrounded by reverb. So, in short, if you're talking about sound, you're also talking about reverb ─ a natural phenomenon that mirrors life to some extent, and links things not only to the place where they are but to each other, too. 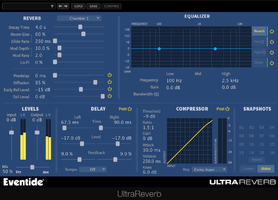 And yet, modern music production means often forget this crucial aspect of sound. It's true that natural reverb has a tough time finding its way among all those close-miked, synth-based and virtual instruments. Which isn't a bad thing, because it gives you much more leeway during mixdown. However, it will also force you to use a reverb plug-in.

Thus, artificial reverbs allow you to make your productions sound a bit livelier and more natural again. Besides helping create a coherent three-dimensional space, albeit not necessarily a realistic one, as we'll see later on. Finally, reverb can also help bond together the different elements of the mix by filing up the soundfield with a layer of texture that will be common to all instruments.

These three are the main (although not only) reasons why you should use a reverb: liveliness, space and bonding. And depending on what you want to do, you'll have to choose a plug-in that fits the bill and use it in an appropriate way. So, now you know, this is how I'll approach work with reverbs in the upcoming weeks, starting with the hows in the next article...!