The Opposite of Punchy

What does roundness mean within the context of audio dynamics? Well, it's usually a soft sound, without any aggressiveness and with a nice presence. In more technical terms, roundness describes a sound whose attack is relatively weak in relation to its decline. In short, it's the exact opposite of what we were looking for last week. 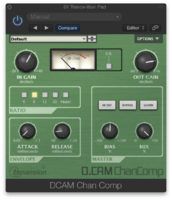 Why would you want such a sound? First, it allows you to reduce an overly aggressive-sounding track. On the other hand, it can also be useful to increase the sustain of an instrument that is coming up a bit "short." Or it could also help you give more presence to a weak melodic line, or to give some weight to a sound that is too light. Finally, from the point of view of the sonic puzzle, a round sound will naturally find its place in the back of the mix without it becoming invisible. Roundness does not mean sluggish. Processing a sound the way I'll show you, will reaffirm the sound of the instrument in order for it to become one of the foundations of the mix.

Since the goal is to reduce transients as much as possible, the settings of the compressor will be relatively extreme. You want to set the threshold low enough so that absolutely all attacks are captured by the compressor. The ratio, in turn, ought to be high enough that the transients are strongly attenuated. But be careful not to overdo it. You don't want to "limit" the signal, which will make it sound aggressive. A ratio ranging from 6:1 to 10:1 should be enough.

As for the time constants, fast is the key word here. A short attack time will allow the compressor to catch the slightest peak as soon as it exceeds the threshold, while a fast release will stop the compression on the spot as soon as the signal drops below the threshold, which will leave the natural decline of the instrument intact. But it is obviously not as easy as simply setting the fastest attack and release times available. That would be way too easy. Unfortunately, you'll need to use your ear to find the best settings, and to avoid any distortion or pumping.

As for the knee setting, there are no rules. The result depends a lot on the nature of the signal, so you'll have to experiment with different settings until you find what works best for you.

Finally, since the transients of the signals processed this way have been "muzzled," you can use the make-up gain to increase at will the overall level of the respective instruments so they find their place naturally in your sonic puzzle.