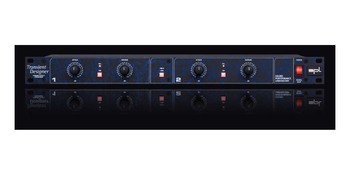 Transient processors are relatively recent devices. If my memory doesn't fail me, I think the first one was launched as a hardware rack unit by SPL in the late '90s, under the name Transient Designer. Ever since, its operating principles have been copied many times and you can now find plenty of plug-ins directly inspired by it.

But what is it, anyway? From the point of view of the user, transient processors are extremely simple devices, often limited to two pots: One that allows you to increase or reduce the transients of the processed signal, and the other one to control the sustain. If you consider the ease of use of this type of processor, it might seem redundant since, as we just saw, it is possible to obtain similar results with a compressor. Up to a certain point, that is. Don't forget that a compressor works with a threshold and, thus, its response depends on the level of the signal source. That's not the case with a transient processor and that's where its beauty resides!

A transient processor can prove very useful when you want to subtly balance the sustain and attack of a sound independently of the level variations during a song. Hence, playing dynamics and, thus, the musician's intentions are preserved, which is a good thing. Moreover, it's interesting to note that, unlike most compressors, transient processors do not color the sound at all.

While the Transient Designer might seem "magical" due to its simplicity and efficiency, you should use it with caution because it's very easy to abuse it, which can result in artifacts that are anything but musical.

Finally, it's not unusual that people end up using the best of both worlds by combining a transient processor and a compressor.

As I said before, there are lots of transient processor plug-ins out there. Here's a small and non-exhaustive list of paid and free options: 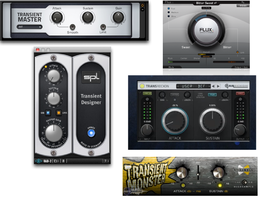