Tone Box from the USA

I emphasize the fact because, more often than not, the origin of effects pedal for guitarists can be very perplexing. In fact, it's not rare to run into pedal series developed generally in Asia and mass produced industrially. Generally speaking, we are overcome by doubts right from the start, especially because we fear that a compromise has been made regarding the components used (for obvious economic reasons). Conversely, when we cross paths with "homemade" pedals ─ created by the inspiration of a single man ─ we look at them more attentively. These "Flickinger" Tone Boxes carry only the name of their creator (one Richard Flickinger), who's main concern is to create effects by hand choosing the best components, and preferably vintage.

The range is large enough: no less than ten effects have seen the life of day (it's worth noting that there are also amps and speaker cabinets available under the same brand). But let's concentrate on this trio of pedals. The first thing you'll notice is that the names do not lack imagination nor humor!

First of all we have the Caged Crow, which despite its dark name is a distortion/fuzz. Then we have the Germanium Griffin (the lion with eagle head is imposing!): a fuzz/boost pedal conceived to deliver a big sound. And to complete the lot, we have the Vicious Cricket, a 100% analog tremolo pedal.

They are all hand-made and hand-painted, completely analog and have a mono input and output on the rear panel. Apart from the very particular aesthetics, there is no other exuberance. The idea is to keep it simple and effective. We really like the solid and sturdy build of the boxes in aluminum. On the other hand, accessing the battery demands some time and a good set of tools (no, your pick won't do). You must loosen the four screws located on the bottom side, because no specific cavity is provided for this purpose. But let's move beyond this technical detail that some might find annoying ─ don't forget that there are many competing products that exhibit this exact same problem. So, after getting a mid-sized screwdriver we can open the lid to find a 9V battery (included). After several observations, which we will detail later, the moment has come to supply them with power and connected them between guitar and amp to see what they are made of.

Take the crow out of its cage! 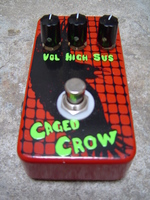 The Caged Crow is a distortion/fuzz pedal. It features two BC183C transistors, which stem from the same family as the Fuzz Si transistor (the latter is the one used in the original Fuzz Vintage), as well as a Mosfet BS170 (transistor installed on most Flickinger pedals) to create a distortion pedal with a massive tone. The Crow provides an infinite sustain (or almost, depending on the predefined settings) and more gain that is normally authorized.
The "High" potentiometer acts as a passive low-pass tone control. It allows us to boost the highs once fully open or to have a more muffled sound or even "bassy" when only slightly open.

The volume knob increases the volume of the output level quite substantially and might be used as a booster to crunch a bit the amp's input. And finally, the SUS knob regulates the distortion amount. Adjusting the latter allows us to obtain a very bluesy sound when slightly open, but also a thick and big overdrive when driven to the max. 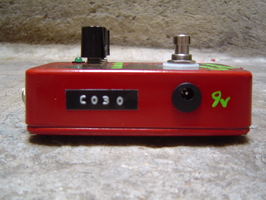 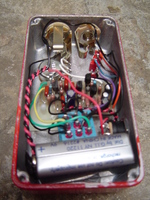 The rage of the lion or the force of the eagle? 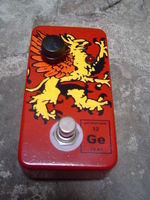 To be true, the Germanium Griffin is the sum of both. In fact, this pedal is a boost/fuzz equipped with two Russian NOS transistors. Unlike most fuzz pedals using High Gain germanium transistors, the Germanium Griffin use two Mid Gain transistors pushed to their limits. It only has a volume control (but the leeway is high!). The distortion level is simply regulated by turning the guitar's volume control. Easy to use and very effective. To be honest, I love this pedal.

After hours playing with germanium pedals I have come to realize something: the color, the tone, varies depending on the age of the battery. If you have one ─ it might even be this one ─ test it yourself: first try a new battery and then replace it with an old one. You will notice that the result can be stunning at times! 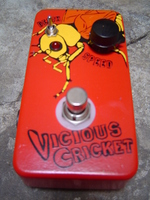 What did Mr. Flickinger mean by naming it that? I'll have to ask him.

This Vicious Cricket is a vintage tremolo with four transistors meant to replicate the sounds of yore. It features two parameter controls: Depth adjusts the intensity of the effect. This switch has two positions, light (down) or very intense (up). In this latter case, the tremolo will crush the attack of notes to give way to a deeper and more expressive effect. The second control affects the cycle rate, from very slow to very fast. If there were enough space on the pedal, it would've been nice to have a third knob to modify the oscillator's waveform, like on other, more traditional, tremolo models. Anyway, its efficiency and sound convinced me right away. 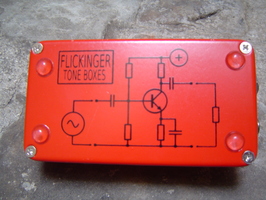 To be totally honest, it was a real pleasure to review these pedals. The components and transistors used (especially the USSR germanium NOS for a more musical gain) seem to have been carefully selected to get an authentic "vintage" sound. A word very frequently used (very trendy right now), which is not always honored like it should. Comparing it with other more traditional models I was able to clearly recognize a difference in terms of sound. Especially with the Germanium Griffin whose character is original. It stands out from the rest. All pedals are solid, sturdy, equipped with a switchable True-Bypass, and built and painted by hand ─ several factors that persuaded me right from the start.

My only regret concerns the power supply, given that accessing the battery is not very easy. What's more, only the Caged Crow can use an external power supply. For a very similar price compared to competing products, it would be a shame to miss out on them when looking for comparable effects.