In 2010, 21 years after the fall of the wall, the brand with the two palms once again came into the limelight with a series of much more colorful analog effects pedals for guitar called Root Effects. Unveiled last year at NAMM and released in May, Mutterstolz, a tube distortion pedal, is the youngest offspring of the collection.

A Panzer in the crib

In the language of Goethe (you know, the German poet...) Mutterstolz means "Mother's Pride." In case you didn't have German in school, or already forgot most of it, the English translation is written on the white pedal itself to help you remember. 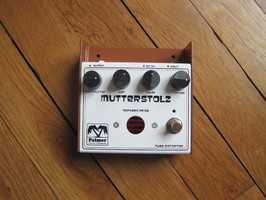 The pedal is mounted on a brown steel base that protrudes a bit on the top and sides (see the images). This original design provides, in theory, a better protection for your cables, which are connected on the top of the pedal rather than on the sides, as is usually the case. Thus, it keeps them from being twisted and, ultimately, breaking. Add to that a couple of holes, right underneath the jack inputs to screw the pedal onto the pedalboard, and a large anti-slip pad glued to the bottom, which works very well (we tested it on a freshly polished parquet floor... The things we do for you!.)

Some will find this concept all right and some others, like me, see certain drawbacks that make it a could've-been-a-great-idea-but-it-isn't sort of thing. In fact, with this protection it is hard to use those right-angle plugs that are commonly seen on pedalboards. Moreover, the pedal (4.7" x 2.4" x 5.9") will take up some precious and much needed space on your board. And, finally, most guitarists constantly change the order and disposition of their pedals, and even the pedals themselves, to save space or get a new sound. You must really LOVE a pedal to screw it onto your pedalboard.

As for the rest, we must also admit that the pedal inspires a lot of confidence. It's solidly built, very solidly built, actually, and, as a consequence, also heavy (0.85kg). The nuts holding the jack inputs are made of metal and the footswitch seems to be cast-iron. Right at the center of the pedal is a round hole with a Plexiglas cover that allows you to see the ECC83 tube, which lights up thanks to a red LED when the pedal is noisily (with a loud "plop" coming through the speakers) activated (I didn't have enough time to see if the tube can be easily replaced. But, in any case, no special measures seem to be needed to gain access to it). It's aesthetically very well achieved. However you musn't forget that the footswitch is not in the middle of the pedal, but rather (unusually) a bit to the right, otherwise you'll look like a dummkopf whenever you're playing live and want to boost your solo, but miss the switch. 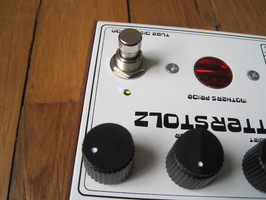 Right above the switch we have another LED that illuminates red when the pedal is active and green otherwise. On the pedal we tested, it was not perfectly centered. Perhaps someone else tested it before us and put too much effort into it. But this problem doesn't seem to be a recurrent one, other Root Effects we've had in our hands were perfectly assembled.

The signal remains unaltered when the pedal is not activated, since the Mutterstolz has a true bypass design.

Next to the INPUT, on the right, is the 12V power supply connector. No batteries then and another PSU (included) to carry with you, if you only have a 9V one.

The pedal features four black plastic pots (whose functions we will detail in the next section) to control the effect. They seem a bit less sturdy and cheap than the metallic ones on the other Root Effects.

Inside the box you will also find the manual in several languages, and two picks.

The mother of all Palmers 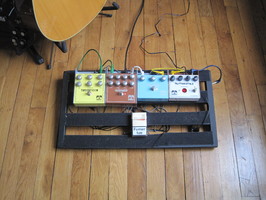 The pots — with names that promise the apocalypse — are, from left to right: Destruction, to control the distortion amount; Dirt, to control the amount of harmonics and sustain; Color, to change the key of the distortion; and Mother — the mother of all pots —, which corresponds to the Level on any other pedal.

We will pay our respect to mamma with a Gibson Les Paul Boneyard Joe Perry Signature connected to a combination of a Mesa Boogie Triaxis and a 2:90, which is in turn connected to a Two Notes Torpedo Live.

The dialings for the first six examples are the following: 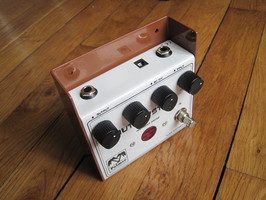 As you can see, the sound of the Mutterstolz is closer to an overdrive than to a real distortion. Moreover, the Destruction pot seems to be a little misleading (neither metal nor a modern big rock sound), considering that it's closer to Agent 86 than the Terminator. However, it does have an assertive personality: some won't like it, but others will appreciate its retro raw side, its slight and outdated fuzz with a delicate "beehive" touch. It reminds us of Cream, but also of songs like The Beatles' Come Together and World In A Jug by Canned Heat or, to use a more contemporary reference — keeping all proportions in mind — the sound of the Black Keys.

Notice also the impact of the Color and Dirt settings, the latter adding some bite to the overdrive. With Mother set to 12 o'clock (or, to be more precise, slightly beneath that point), we get the same level as with the effect bypassed. Beyond that we can use it as a boost for the amp's distortion.

The settings for the next two examples are:

8. Destruction at 12 o'clock, Dirt and Color 3/4 up and Mother 2/3 up (the amp's light crunch turns into a very gritty and fat distortion to play stoner metal, for example)

9. Everything 2/3 of the way up, except for Mother, which is 3/4 up (alternating between crunch rhythm parts with the amp and boosted lead parts)

And, finally, the playing nuances are well respected, which certainly has a lot to do with the tube:

While there's nothing to make mamma Palmer particularly proud of her offspring (nobody is perfect), she has nothing to be ashamed of either. Its price ($399.95 and around $200 in stores) place the Mutterstolz in the affordable category among tube pedals. Despite its design defects, guitar players can outfit themselves with a solid and, apparently, reliable overdrive pedal, instead of a fat distortion, especially good with low output pickups, that has a very obvious "roots" personality. That said, if it matches your vintage taste, you can carry it with you on stage and hear your mamma scream at the top of her lungs while your playing your most daring solos: "That's my baby! It's my mom! ... Just listen to my boy! Oh, how good he is! I'm so proud of him!"