Everything about guitar and bass pickups - Part 3

About Single-Coils, Dual-Coils and More

There is however a simple means to make the pickup much less sensitive to interference, while at the same time increasing its output power and modifying its frequency response to get a smoother sound in the low end and more twang in the upper frequencies: Coupling two sets of magnets+coil.

The electrical signal produced by the pickup when the strings disturb the magnetic field depends on the interaction between coil and magnet. In such a setup, the motion of the strings on top of the two coil+magnet sets produces an electrical current that circulates in the same direction along both coils, which makes the two signals sum up. If the setup hadn't been inverted, the electrical signal would've been inverted between both coils, canceling each other out. On the other hand, the electrical signal depends solely on the coils, which act as a sort of an antenna picking up electromagnetic interference, resulting in hum. So, when the two coils are inverted with respect to each other, the interferences cancel each other. 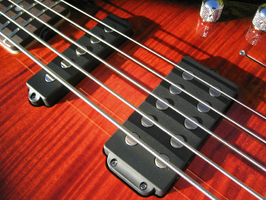 Thus, the useful electrical signal produced by a humbucker is higher and the noise lower. Their ability to cancel hum give these pickups their common name: humbucker. Seth Lover, an engineer at Gibson, was responsible for this invention in 1955 with the PAF humbucker (which stands for "Patent Applied For"). This sort of dual-coil pickup has been always linked to the Gibson Les Paul sound, even if it has been used on countless other instruments since the 1950s.

Fender introduced a similar means to tackle the issue on the 1956 Stratocaster by using a middle pickup whose phase and polarity were opposite to those of the neck and bridge pickups. So, electrically speaking, the combination of either the neck or bridge pickup with the middle one is like using a humbucker!

Got it? Okay, let's add some confusion now: Mounting a magnet+coil set in humbucker configuration to cancel interference works even if the signals coming out of the coils aren't summed. In other words, you can actually use a second pickup to "clean" the signal of a coil while using only the signal of the first coil to produce sound. This way you have a single-coil that sounds like one but without the hum. In such cases, the second coil is called a "phantom coil," since it has no use in terms of sound, it's only used electronically.

There are two ways to connect the magnet+coil sets (with the corresponding hot and ground wires coming out of each coil) of a guitar or bass. This applies whether you are dealing with two coils within the same pickup (a humbucker) or two pickups on an instrument with several pickups, regardless of whether they are single- or dual-coil. 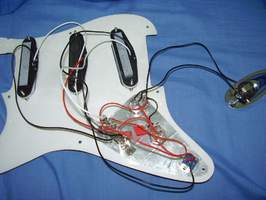 The two possible wirings are:

In short, the coil+magnet sets inside a humbucker can be connected in series or in parallel. Connections in series are more common among guitarists, who usually adopt the setup proposed by Gibson for the PAF. Thus, a standard guitar humbucker is considered as an inseparable single pickup with only two wires at the output (ground and hot) resulting from the combination of the two coils.

On the other hand, if an instrument has at least two pickups, regardless of their type (single-coil or humbucker), they can be connected in series or in parallel. The wiring possibilities are then handled directly with the instrument's volume and balance potentiometers, toggle switches, etc.

And what about split coils?

As its name implies, a split-coil setup involves the separation of two coils that are usually connected between them. So, they are humbuckint pickups with two magnet+coil sets usually connected between them (in series or in parallel), but which can be disconnected using a switch. When they are disconnected, one of the coils works like a single-coil and the other one is no longer part of the circuit. Instead of having only two wires at the end, this type of humbucker has four: The input and output of each coil, which allows you to control with a simple switch whether they are connected or not.

Among modern or custom-made bass guitars, it's not unusual to find humbuckers with three positions for one single pickup. Parallel wiring isn't too popular among guitarists, but the possibility to go from a humbucker to a single-coil and back provides lots of versatility, considering the two distinct characters they provide.

As I mentioned before, the number of turns of the coil around the magnet has an influence on sound. Some clever manufacturers offer pickups with several outputs, with the possibility to choose whether you want to use the entire coil or only part of it. This is called "coil tapping." That's a not-very-glamorous name for a complex device, which actually has nothing to do with the different wiring options of the coils themselves...So don't get confused!

Given the infinite number of possibilities, it's easy to get lost when talking about connections in series or in parallel when you are not sure whether you are referring to the wiring within the pickups or between them. Be careful! 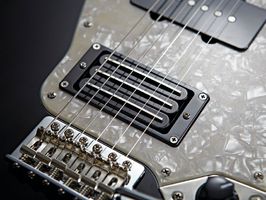 Having only single- or dual-coils would be really boring, right? Well, the truth is that there are indeed only two types of pickups: single-coil and dual-coil. However, inside the pickup itself (the rectangular plastic case where the wires are) you can have as many coils as you want, with all sorts of different wirings.

So, pickups can have three coils (triple-coil) and be mounted in many different ways: With two coils wired between them as humbuckers and the third one as a single-coil, all in series or in parallel; all three pickups can be mounted in series as single-coils; two can be used as humbuckers and the other one as a phantom coil when the humbucker is split as a single-coil (like the pickups of the Ibanez AT basses)...The only limit is your imagination.

Quad-coils are more recent and they feature four coils, most commonly grouped in pairs of humbuckers, with all imaginable wiring combinations, both of the pickups internally and between them.

Knowing how the coils and pickups are wired inside and between them can really make a difference.