Everything about guitar and bass pickups - Part 1

How Magnetic Pickups Are Built and How They Work

There are countless tests proving both of these points of view, from the basic differences between a Fender with an ash wood or an alder body to tests of pickups mounted on an instrument made of Ikea plywood. In this series of article series I will try to...not get into that debate, but rather shed a light on some of the technical aspects of pickups, especially their construction and operation. Each of these elements is important for the final result. But how much? It's impossible to tell, besides it can be so subjective...…

Magnetic pickups installed on electric instruments (guitar, bass and even electric pianos like the Fender Rhodes) work according to a very simple principle. At the core of the pickup is one or several magnets, which create a magnetic field. These magnets are wrapped with a coil of conductive wire with two ends, one of which is the ground, i.e. a connection to a zero-voltage reference point, and the other one is the "hot" end. The combination of the magnet and the coil create a magnetic field above the surface. At rest, the value of this magnetic field is stable. 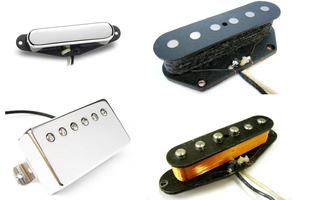 The string, made of a magnetically sensitive material (that's why catgut and nylon strings aren't compatible with electric instruments), passes through the magnetic field. When the string is played, it vibrates at a frequency defined in Hz, which depends on the mass of the string and its length. These two parameters determine the frequency at which the string vibrates and, thus, the note produced ─ in music, a note is the vibration of air at a given frequency, so for instance, concert A vibrates at 440 Hertz.

The motion of the string disturbs the magnetic field, which produces a difference in electrical voltage between the two ends of the coil surrounding the magnet (electromotive force, emf, according to the Faraday-Lenz law) and thus, a current in the coil. Put briefly, an electrical current is the difference in voltage between two points connected with each other. This ability to convert a perturbation of a magnetic field into electrical current, and vice versa, is called inductance and is measured in Henries (H).

At this stage, the electrical current is very low, just a couple tens of millivolts. It's interesting to note that the value of this current (intensity and tension) is proportional to the disturbance of the magnetic field (according to a law based on a horrifying mathematical formula I will spare you from). And this magnetic disturbance is itself proportional to the string's vibration frequency (according to another just as terrifying law).

With this simple device, whose theoretical foundations date from the 19th century, a way was found to convert the motion of a string made of a metallic material into a measurable electrical current variation proportional to the original motion of the string.

The time has come to salute the inventors of this wonder: After the first patent in 1909 and several unsuccessful attempts (like the Stromberg-Voisinet brand in 1928, which never took off, because even though they had guitars with pickups, they lacked amps worthy of the name…), Paul Tutmac was the first to equip a Rickenbacker Hawaiian guitar with pickups in 1932. In 1936, after several bizarre prototypes, Gibson started marketing an archtop type guitar with a pickup designed by Walter Fuller. The great guitarist Charlie Christian would later adopt this model and lend his name to the pickups and guitar.

Do note that this technology differs from the one used by microphones in that, unlike the latter, it doesn't capture air pressure variations (in other words, sound). 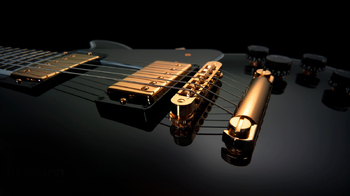 Let's take a look now at the defects of the device, to which we'll come back later on to see how to solve them:

However, in real life no electrical device is as perfect as the mathematical laws would have you think. The number of turns of the coil is far from being negligible and too many of them can result in capacitance, in other words, the accumulation of electric charge in the coil. So, the combination of magnet + coil behaves both as an energy source and a resistance to the passing of the current it produces...

Now that we know the principles behind pickups, we can start exploring the evolution of each of the components individually. Stay tuned...!