Among the best accomplished, TC Electronic has had a very prolific year with its Ditto Looper, Polytune Mini and Spark Mini Booster. The latter are, as their names imply, miniature versions of two best-sellers of the brand: Polytune and Spark. The Danish, the most experienced among the Jivaro Indians, have continued reducing the heads of their reference stompboxes. This time they present the latest member of the Toneprint family, the HOF Mini, a microscopic rendition of their famous reverb pedal Hall of Fame. 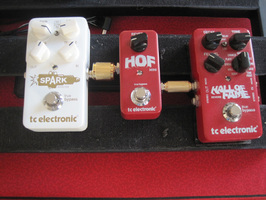 As soon as we take it out of its box, we notice that the format is identical to the one of the Spark Mini (51mm x 45mm x 93mm) with the exception that it features a USB port just above the PSU connector. I feel obliged to repeat the same small criticisms that I found on the booster due to some defects inherent to the format:

- The jacks are not aligned. Forget the male to male jack adapters often used to place pedals as close to each other as possible to save space, you will be forced to use patch cables (or non-aligned adapters like on the picture).

- What's more, the bolt fixes the jack connector with only a few turns and can become loose, so you will have to tighten it from time to time in order not to drop it and find yourself with a jack connector lost in the Hole Of Shame.

- Finally, and this is the only real flaw of these mini boxes, we have the batteries issue. If you already have a pedalboard with power supply it shouldn't be a problem. For everybody else, it means you need to get one and add it to the things you already carry in your gig bag. Another solution would've been to offer a model with rechargeable batteries like certain brands do, but it's a risky gamble when we know they are made to be used and disposed of one day.

However, all these restrictions have a compensation: with effects this size, our pedalboards will be very light and can be carried in a backpack or a small bag or even inside the guitar bag.

And coming back to pedalboard owners, they will not have tear off the non-slip pads in order to use the usual Velcros. In fact, they come as a separate add-on inside the box, a good idea that other manufacturers should follow suit. 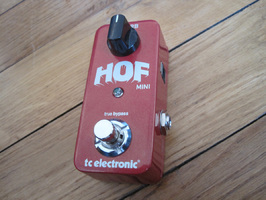 When it comes to the look of the pedal, it is less baroque and more discreet than the Spark mini (whose classy design, it must be said, was specially designed by a tattoo artist). Sporting the same red robe as the model from which it stems, it also shares the same font type and not-too-blinding red LED.

Since it was surely impossible to write "Hall Of Fame Mini" given its small format, the manufacturer sticked to the initials H.O.F (unless it's a resounding homage to metal/sludge band High On Fire, which I sincerely doubt).

Conversely, the footswitch is the same as on the Spark Mini and thus different to that of its bigger sibling. It offers less resistance when we step on it and makes activation smoother, but also less noisy. The PRIMETIME system (activation/deactivation of the effect depending on whether we keep the switch pushed or not) isn't as interesting here as on the booster, so it was not inherited.

Right above it we can see the classic "True Bypass" (the signal isn't altered when the pedal isn't activated) common to all pedals from the Toneprint series.

But comparisons stop here: the circuit was replaced and is from now on faster than that of the Hall Of Fame. The TONE and DECAY pots, as well as the PRE DELAY mini-switch and the reverb selector were left out. FX LEVEL was replaced by a potentiometer tellingly and logically named REVERB.

Only one switch and one button isn't much, is it? 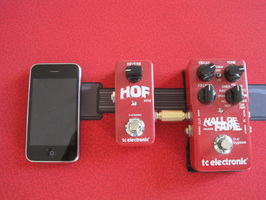 Well, that's not entirely true. One single pot might seem too little to effects-bulimic guitarists, but they will be quickly sated and even crammed (force-feeding guitarists is prohibited in California since 2004) by the endless possibilities offered to them. Indeed, we must not forget that our little friend is part of the Toneprint series. That means that even though the pedal features the exact same HALL reverb algorithm as its bigger sibling by default, we can load onto it any Artist Toneprint — reverb presets by six-string (and even four-string) celebrities like Steve Morse, Steve Vai or Steve Ettehorner, the brother of the famous accordionist. There will be specific Toneprints for the HOF Mini since those of the original Hall Of Fame aren't compatible. Plus, it will benefit from reverbs taken from the latter, namely ROOM, SPRING, PLATE, CHURCH, MOD, LOFI, TILE, AMB, and GATE. Not bad, huh?

But hold your horses, that's not all! In the same way as other pedals of this series, we can create our own presets, for example, by adding some modulation to the reverb or giving it more depth, with the help of the Toneprint Editor (for Mac, PC and iPad; no iPhone, due to the screen size, probably, which nevertheless would've been very practical). The editor is very comprehensive even too complex, but the interface is nice and clear, but the interface is nice and clear. At the time of writing this review it still didn't recognize the HOF mini but that will surely have been fixed for its official launch (the screenshot was made with a real Hall Of Fame connected to a computer). We will also be able to use the USB port to load Toneprints onto the pedal. Unfortunately, there is no USB cable included, so you will have to get one yourself. 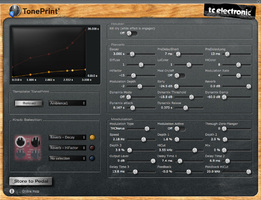 Those of you who don't have one can load them directly from your smartphone and the Toneprint App (free, for iOS and Android). The latter will allow us to choose from a nice collection of Toneprints to "beam" them (like Scotty!). You have to place your device, with the volume to the max, in front of either of your guitar's pickups (whose control must also be fully open) and let it play a sound, in MP3 format — it's pretty weird actually. Here's an example (we recommend you to reduce the level of your speakers, because it is a bit strident):

The mini HOF's LED will start flashing green more or less quickly, until it turns to its classic red again. That means that the chosen Toneprint has been successfully transferred to your pedal.

This rather simple method might seem very amusing but it certainly won't be as much for those who don't have a smartphone.

On the other hand, if I had serious doubts about its operation on stage (say when I want to change from a reverb with modulation used on a very 80's song like "Personal Jesus" to a spring reverb for a more 50's surf guitar on "Wicked Game"), they were quickly dissipated. It is really fast and effective, even with lots of background noise or your band still playing, but it might make you the target of funny remarks like "guitar is played with the fingers not with an iPhone, you dork!" It is strongly advised to have your favorite Toneprints ready to use (in a list that we can fortunately save in the Toneprint App).

Just be careful not to confuse the pickup and to place the smartphone in front of the pickup you activated with the selector on the guitar to avoid unnecessary problems that can stress you in front of the audience... making a laugh of yourself, being casted off by your friends and colleagues and having your wife, kids and even your dog disown you, pushing you towards alcoholism and depression. So just pay attention to the pickup selector.

In the end, all this sound options make our mini HOF incredibly more sexy and extremely more powerful than its ridiculous size makes us believe it is at first sight. It's a sort of Master Yoda with red lipstick and fishnet stockings.

"Size matters not. Look at me. Judge me by my size, do you? Hmm? Hmm. And well you should not" - Master Yoda.

In order to show you The Force within this mini HOF, the Jedi in me chose the Fender Telecaster Deluxe lightsaber. As my X-Wing I used a rack amp without reverb: a Mesa Boogie Triaxis with its Simul-Class 2:90. They are connected to a Two Notes Torpedo Live which in turn is connected to an Apogee Duet.

At 1/4 of the travel, it's only a receiving hall, the effect being barely audible. To really hear it we need to play tight chords. At one third it's really good, moderate but effective. At two thirds we are on our way to the Madison Square Garden. With the pot all the way up ─ a feat worthy of Peer Gynt ─ we are totally lost in the Grand Canyon.

The action of the pot is truly progressive and the nuances palette is very wide. Everybody ought to find something that makes them happy.

Now let me introduce to you the rest of the reverbs included in the original Hall Of Fame. 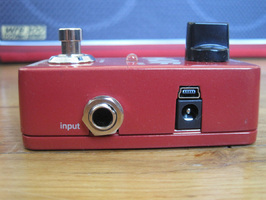 Some reverbs, especially the ones with more depth (ROOM, PLATE and CHURCH) sound very similar, even too much to my taste. But I really like the MOD, which is indeed very simple and exaggerated with its invasive chorus, but it can be useful to imitate synth pads, especially if we cut the attack with its volume. GATE will help us swell our sound without dragging along dry attacks. LOFI plays its role perfectly, dirtying up our sound and clearly boosting high frequencies, it can come in very handy to get artificial harmonics very easily without the need of pushing the gain of the amp. TILE, seems to be very interesting and effective for strumming. SPRING is, as its name implies, a more than fine imitation of a spring reverb. And finally, AMB is particularly effective for rockabilly and country due to its very short duration.

The transparency of a sound is often a decisive criterion when buying a pedal. And when it comes to reverb, it is crucial. In this case ─ as usual with TC Electronic products ─ the outcome was successful.

And to wrap it up, here are three Artist Toneprints specially created by Steve Vai and Steve Morse.

It's almost flawless. After all, having access to an incredible amount of quality and transparent reverbs in a mini format with the simplicity of a single button... it certainly is on the light side of The Force, even if with a couple of dark spots here and there. It is very dependent on third-party tools, like a smartphone or a computer. Without them it loses a great deal of its interest. Especially considering that with a retail price of around $109, it's only $40 cheaper than the original Hall Of Fame and $40 more expensive than certain pedals of the same size, which even if less transparent and versatile they include effects that we can tweak on the fly. At the end of the day, the decision of getting a HOF Mini might not depend on its capacities, which are proven, but on your personality and whether you like gadgets and technology or you'd rather stick to more classic and direct methods. Whatever your choice, may The Force be with you!