Levels in The Digital World

In order to do that, it is useful, as always, to first consider the analog world. We will then see how it all translates into the binary dictatorship of digital audio to be able to play our cards better.

Most professional analog gear has a level indicator called a VU-meter, where "VU" stands for Volume Unit. On this VU-meters, the reference level is 0 dB VU. Just so you know, 0dB VU = +4dBu, which translates into 1.23 volts. Now, this reference level was not chosen by chance! Without going into details, let's just say that it is the optimal nominal operating level beyond which there is the risk that the audio signal might clip. In plain English, if you exceed that level, the sound will start to distort progressively with more or less charm, depending on the quality of the device. On the other hand, if the signal level is way below, there are many chances that you'll end up with as much noise as signal at the output, or even more…

So, to work properly in the analog world, it is important to watch the VU-meters so that the needle is always as close as possible to the 0dB VU mark. Thus you can rest assured that the sound will be full and clear. However, from time to time you can exceed this "barrier" without too much to worry about. Hardware devices provide a headroom that can go up to +24dB, in the best of cases, before the sound becomes an unbearable jumble of noise. Anyway, even if the needle only flirts continuously with the 0 dB mark, without ever going over it, you can bet that no one will be offended if it does occasionally exceed that threshold. Why is that? Because a VU-meter doesn't really show the peak level in real time, but rather a mean value. And that's good, because human hearing is much more sensitive to mean levels than to peaks, so the meter gives us a more real impression of the actual perceived volume — my God, is analog life good!

In the digital world, things aren't quite the same… For starters, we don't talk about dB VU, but rather dB FS, where "FS" stands for Full Scale. Next, you have surely noticed that the level indicators of your DAW do not exceed 0dB FS. And for a good reason! 0dB FS is the maximum level for a digital signal. Beyond that, clipping is guaranteed, which translates into an appalling noise that isn't musical at all. Last but by no means least, these indicators are peak meters. They indicate the maximum level of a digital signal in real time rather than a mean value (like the VU-meters). This is very practical to avoid the horrible digital "clipping," but that's about everything because it does not tell us at what level to record or if the signal is actually "loud" enough.

Right, but then at what level should we work in a DAW? Should we go as near as possible to 0dB FS? What's the relation between dB VU and dB FS? That's what we will discuss in the last paragraph.

At the heart of this puzzle lie our digital converters. As you can imagine, they convert electrical signals into a series of 0's and 1's. But let's not forget that before that conversion takes place we are still in the analog domain! Therefore, these devices also have an optimal operating level, which you can read in the manufacturers' spec sheets. Generally speaking, the calibration of 0dB VU varies from -20dB to -16dB, depending on the device. So, to be on the safe side, we recommend you to track at a value somewhere around -18dB. But bear in mind there's still another tricky issue... You must consider the mean value, not the peak meter value of your DAW. To do that you will need a plug-in that displays RMS levels. I personally use Blue Cat’s excellent DP Meter Pro, whose reading couldn't be clearer and which offers heaps of features that can be very useful in other domains (mastering, automation, etc.). 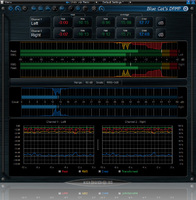 You may now be wondering why should we complicate our lives so much...? Well, because this way your converters will be less "stressed" and thus provide a "clearer" sound. Afterwards you will be able to work with a headroom of 18 dB, which is very comfortable both for tracking and mixing. Moreover, if you are lucky enough to have external analog processors, it will be easier for you to integrate them in the mix, considering that the level at the output of your converters will be 0dB VU, which is ideal to work with an analog unit, as we saw before. And even if you don't have any analog toys, bear in mind that most plug-ins also have an optimal operation level, which is usually set to -18dB ─ what a coincidence! In the end you will notice that by following this advice your rough mixes will start sounding better almost immediately, without the need to mess with the faders too much.

So, in short, recording at -18dB RMS will only benefit your recordings and mixes.