On Tour: Tom Petty & The Heartbreakers

Masters of their Craft 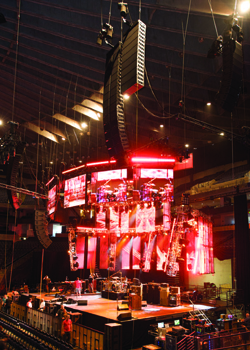 “We’re working with a very organic set of sounds here,” says Robert Scovill, ruminating on the current Tom Petty & The Heartbreakers 2010 concert tour. “Piano, organ, old amps… a traditional drum kit. We don’t want to make things sound real modern. What we want is a transparent presentation of the way things are. That’s where digital comes in.  Using modern technology to reveal traditional and established sounds - I think that’s a great way to go.”

Scovill knows well of what he speaks, and of the technical evolution that has helped bring him to where he is today with the band.  Having pushed faders out front for Tom and the boys since right about the same time e-mail was sounding like a pretty darn good idea, for this tour the Front of House engineer gains the backing of a D-Show VENUE console from Avid and an L-Acoustics K1/KUDO rig supplied by Escondido, California-based Sound Image.

“I don’t want to ever lead people to believe we’re attempting to simply recreate the record live,” Scovill explains, commenting on the audio underpinnings that guide this series of dates running through October supporting Mojo, the band’s first studio offering in eight years.  “That will never be the spirit of what Tom Petty & The Heartbreakers are about at their live performances. They have been together a very long time and have gotten to know each others’ moves implicitly not just onstage, but musically too.  You never get into a routine with them where Tuesday night is the same as Thursday and that’s the same as Saturday. Even with the big production elements surrounding this show, there is still a looseness to it,” he continues.  “Any given song can take a left turn at any moment and go in a completely different direction. This is definitely an ensemble with a collective will, not a group of musicians spoon-fed with material by a frontman.” 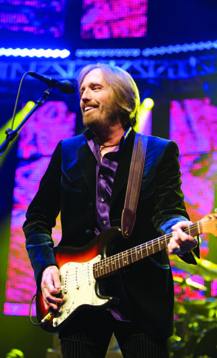 A DSP advantage was gained, however, in being able to port effects settings built by engineer Ryan Ulyate during the mixing of Mojo directly into the plug-in processing of the VENUE system.  That process was facilitated by the fact that Mojo was mixed entirely “in the box” using a single ICON and Pro Tools system, with plug-ins brought over directly from the recording sessions including Sound Toys, Acousticas EMT impulses and Digidesign Delays.

Many of the vocal treatments for Petty himself - especially on newer songs - were pulled directly from the record for the live stage based upon their ability to manage what Scovill refers to as “extreme aspects” such as exceptionally narrow, cone-shaped vocals and slap delays he wound up using to underscore the “vintage-y” vibe.  Scovill is quick to add that he doesn’t routinely lean on plug-in compression unless the situation warrants it, opting in many cases for the channel strip processing already onboard the console.  For the times he does step out from his own internal circuitry for applications like system EQ or group processing, he gains the benefit of a Serato Rane Series of dynamic EQ plug-ins or their parametric offering.

“If I want to get into multi-band compression, I typically use an MC2000 on Tom’s vocal and bass guitar,” he notes.  “Our vocal chain is essentially the multiband compression along with some dynamic equalization to take care of things down in the low-mids and some of the ‘esses’.  That’s really about it. After that it’s just onboard compression and EQ as needed.”  Crane Song Phoenix tape head emulation plug-ins are applied on specific inputs as well as right across the mix bus.  Eventide reverb is a primary player on the drum kit, which also benefits from Waves API 2500 compression.  As further complement, a Brainworx BX Boom plug-in sees use on the drum kit in a fashion similar to a low frequency harmonics box.

It’s been a long time since Scovill first came to rehearsals and found Petty singing into an Shure SM57 with no windscreen, surrounded by four wedges.  With little to no wireless historically being the norm for Petty and The Heartbreakers, this tour is no exception. Petty’s vocal mic these days is a Neumann KMS 150.  “Compared to other singers, Tom is pretty quiet,” he relates, “and his singing has consonants that are often rounded-off. Because of the gain before feedback challenges for live events, it was often very challenging to get a lot of diction on his microphone.

That’s why I took a turn in a completely different direction from what I came upon, and suggested the most sensitive mic I could find in the midrange.  “The KMS 150 is certainly that, with the caveat that it also has a very wide pickup pattern, so you have to be very aggressive and in total control of that fader for the entire night.  You cannot leave it on when he steps away from the mic, so as a mixer you have to learn all of his moves and really be on your toes.”

For past tours, for the sake of continuity, the KMS 150 was also the preferred microphone for backing vocals.  Based on the results of a shoot-out among other mics prior to this tour, however, Heil Sound PR35 microphones landed the job this time for sonic reasons and also because they’re tight in regard to surrounding noise. Back on the drum kit, Scovill employs a Rode NT4 cardioid condenser stereo mic.  “The top end of NT4 is shut down a little compared to most other condensers,” Scovill says of the X/Y device, “but I really like its midrange and low-mids. Plus it lets me easily get a stereo mic up in one position and have very consistent placement night-to-night. I love the center image, it’s a big part of my snare and tom sound up front.”

Keeping with a Petty dictum that says if it ain’t broke don’t fix it, the task of monitoring still relies on a proprietary wedge design first developed by touring company Electrotec years ago.

On the flip side, the stage mix, like the house, jumps into the 21st century thanks to the addition of a second D-Show VENUE desk.

Having pared the number of wedges down over the decades, Petty uses a single in-ear monitor as a supplement to a mix supplied by his own single wedge. Four more wedges span across the stage, and there are no side fills.  At the request of Scovill, Sound Image took delivery of the L-Acoustics K Standard package to serve the tour, comprised of 48 K1 and 36 KUDO enclosures, 24 K1-SB and 24 SB28 subs.

According to Sound Image Director of Touring Mike Sprague, the typical loudspeaker setup for sheds on the tour is an LCR arrangement featuring left and right hangs of 14 K1, eight K1-SB and three dV-DOSC for down fill, plus 8 KUDO flown in the center.

In arenas, the sound crew adds an additional 8 to 10 KUDO boxes per side for far left and right audience coverage.  With the K1 system’s accompanying networked LA-RAK amplified controller racks providing processing and power, the arrays have been used successfully in both arena and shed configurations.

The drive rack at the house mix position is a tablet, period, and not one stitch of additional gear is needed in terms of the drive system.  “We’ve had V-DOSC, dV-DOSC and ARCS in our inventory for some time now, but the premium K1 system really takes L-Acoustics to the next level,” states Sprague.  “Its sound is extremely honest and open - very sonically true to the source. In addition to sounding great, K1 features a rigging system that is extremely well thought out and implemented.”

A pioneering force in the cause of integrating digital into the world of live sound, Scovill offers some pointed comments on the idea of “choice fatigue”- a possible downside to the digital world that’s offering a myriad of sonic options.  "It’s something live sound engineers have never been faced with before,” he says, scratching his head and trying to recall a time in his 30 years of professional life when such a thing could even be considered a problem.

“In the past, what dictated our choices was whatever the sound company had sitting on the shelf. If you went outside of that, then you were confined by space, budget, and rental agreements.  There were a lot of constraining factors. Now our work flow is very analogous to that experienced in the studio. You can say this is what we need and just load it on your system and get to work.”

As for the logic and creativity used to build his mix out front, Scovill relates on a final note that in many respects, all he has to do is get out of the way.

“The sources are just so good,” he says with reverence for Tom Petty and the Heartbreakers, masters of their craft.  “These guys are so good at voicing their instruments and orchestrating their parts, that you just have to let them do their work. In terms of mixing the show, I like to say I overemphasize the obvious. If there is a solo, I bring it up. If there is a critical rhythm part under that solo, you have to hear that too.  “Tom and the band have taught me over time that there is just as much skill in revealing something as there is in bringing something up. It’s not always about louder, it might be a matter of pulling something back so something else shines through.”