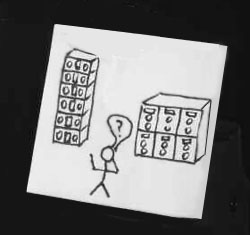 I’m asked a lot of questions about sound.

Many of them focus on unraveling and understanding some particular function, feature or concept, while others are directed toward distilling my opinion on methods or industry trends.  A while ago. I was asked some questions that led me to some in-depth pondering.  The questions: Why are line arrays so popular? Are they a fad or here to stay? And what will be the “next big thing”?

The fact is that line array-type systems have taken the professional sound reinforcement industry by storm. Nearly every manufacturer offers several choices.  But just what is it about line arrays that have positioned them to completely dominate the industry? Is it just a gimmick or is there truly some aspect of the vertical configuration that offers an inherent advantage over other system types?

Stepping back and taking good long look, I found that there are several properties these thinner line systems possess that are readily apparent, plus one substantial advantage in particular that is not so obvious at first but perhaps most important of all.  Just to keep things interesting, and hopefully clear, I’m going to examine the basics of sound system design from a slightly different angle than perhaps is common.

A conventional and intuitively logical approach is to deal with a large acoustic space as a set of smaller zones. To cover the area, one constructs clusters of loudspeakers, each aimed at a particular region or zone. Each loudspeaker box in the cluster can then be optimized in terms of EQ and volume.  With this approach - which I will call “zonal coverage” - it’s advantageous to minimize the overlap between the box-to-box coverage patterns. The goal and challenge for the system designers and technicians setting up the system is to try to achieve smooth sonic transitions from zone to zone.

This system is constructed such that listeners are not exposed to sound emanating from boxes that are in close physical proximity to each other and at different distances. More simply put, sound from multiple sources arriving at the ear at differing times equals “not so good.”  When projecting sound over varying distances, some issues arise. The coverage area of each box increases in size with distance, meaning the angles between boxes pointed far away should be increased.  Yet volume naturally drops with distance, so to maintain volume at distance, the inclination is to decrease the angles between boxes in order to have more of them pointing at the far-away zone.

As a result, zonal coverage systems often employ longer throw, narrow dispersion loudspeakers to help solve the dilemma.  Electro-Voice X-Array, Nexo Alpha, and Turbosound Flashlight and Aspect loudspeaker systems are all excellent examples of zonal systems.  Much effort was put into these loudspeaker designs, in order to achieve distinct and consistent vertical and horizontal coverage projected from each individual box.  Usually, they employ relatively few drivers in each box, with horn-loading assisting with pattern control.

The other approach utilized for larger acoustic spaces with loudspeaker is what I will called “summed” - the attempt to get the output of multiple loudspeakers to work together and act as a single larger loudspeaker source.  The coverage pattern of this giant loudspeaker is then adjusted and optimized to cover the listening area by varying the angles between the individual boxes.  The big challenge with the summed approach is optimizing the “cooperation” between the various loudspeakers, generally achieved by physically aligning the loudspeakers very close together in order to minimize them acting as separate sources. (Subwoofer arrays almost always act as summed arrays.)

A common goal of well-designed versions of both approaches is to avoid is having a listener hear two acoustically “separate” sources that are in close proximity to each other that are also not equidistant from the listener.  Why? Well, mainly because non-equidistant sound sources reproducing the same signal creates comb filtering issues that reduce output levels, messes up the frequency response, and most importantly, does not sound very good to our ears.

The summed approach, until recently, was considerably less widespread, with examples being Clair Bros S-4, my company’s (Rat Sound) Rat Trap 5, and to a certain extent, Showco Prism. (The actual components and configuration of Prism were kept “secret,” so it is my opinion, based on mixing on the system and its sonic characteristics, that lead me to believe that it’s based on a summed-output type design.)

These loudspeakers tend to rely on boxes with quite a few drivers in each box, placed in relatively close proximity to each other allowing them to unify their outputs. A major issue can be the physical spacing between the loudspeakers, which can cause them to act as multiple sound sources, creating box-to-box overlaps, comb filtering, and inconsistencies in coverage patterns.

Sound, like everything else in life, is never perfectly black and white, instead existing in varying levels of gray, so the reality is that practically all real-world concert sound systems exhibit varying degrees of both approaches. Low frequencies tend toward summed, while high frequencies tend toward zoned.  The techniques sound system designers implement to push toward zoned or summed, and at what frequency that transition occurs, is a key factor in clarity, coverage consistency and versatility.

One off-shoot of the summed approach is the line array. By the way, line arrays are not new - the concept has been around and utilized for decades. One example is the venerable Shure Vocalmaster, a popular portable PA of the 1960s, which used a vertical line of 10-inch cone drivers within a single loudspeaker cabinet.

Take a close look at a Clair S-4 and you can see that the 18- and 10-inch cone drivers form vertical line arrays when stacked. The Rat Trap 5 also could be configured in a line type array, and also check out the Grateful Dead’s “Wall of Sound,” which created vertical line arrays for nearly every instrument.

Through the mid-1990s, the high frequencies of large-scale pro audio systems behaved as a zoned system. while the low frequencies behaved in a summed manner.  The major difference between the two approaches was the overall quality of the zoning or summing, and the frequency that the transition from summed to zoned occurred. The designers of zoned systems aimed for a lower transition frequency, while designers of summed systems aimed for a higher frequency.

Then along came a loudspeaker approach from L-Acoustics first embodied in what they called V-DOSC, which for the first time on a truly large scale employed a fully summed-output approach that effectively incorporated the high-frequency components in the summing.  A unified design approach now existed, where system designers were able to either eliminate the transition from summed to zoned or push it to such a high frequency that it was relatively insignificant.

Now, whether you prefer to envision it in the “cylindrical waveform” description offered by some folks or you just think of it of “as you get farther away the sound gets quieter, but since there are more loudspeakers pointed at you, the volume drop with distance is somewhat counteracted,” the fact remains that line arrays can be set up to project sound over shorter or longer distances merely by altering the vertical angles between the boxes.

A practical feature that the slender line systems offer: their narrow profile is quite easily intermingled with video walls and set pieces. Most people want to see, but they don’t necessarily want to see the sound system (except for a few of us), so having the ability to locate higher output loudspeakers into smaller spaces a strong asset.  The relatively simple two-dimensional rigging that only deals with vertical adjustments not only allows for a high degree of predictability, but is fairly common and typically requires less motor points for rigging in most venues.

The bottom line is that line arrays are simple, practical and predictable, giving them a real-world implementation advantage over other loudspeaker approaches that require multiple, precisely-spaced motor points to provide proper venue coverage.  Still, none of these advantages truly provides line arrays with a hands-down edge. Zonal systems can deal with volume consistency over distance issues by implementing long-throw boxes and utilizing volume shading to compensate and project louder sound to the far away areas.  Further, compact high-volume zonal systems can be incorporated into well thought out set designs, and even flown behind modern video walls that allow sound to pass through.

Well-designed rigging systems for zonal arrays are either in existence or not far off. And generations of cardioid subwoofers offer advances in low-frequency zonal coverage.  Finally, sonic prediction software is not unique to line arrays, and the playing field between the two design theories is fairly even from a technical standpoint.

So all in all, the choice between approaches should be largely a matter of preference and venue logistics except for one thing: we just happen to be humans, and like many critters that run around this planet, we have ears, and also like many critters, our ears are on the sides of our heads.  This physical placement of our biological hearing devices provides us an extremely accurate high-resolution ability to discern the precise horizontal positioning of sound sources, while only offering a low-resolution approximation of the vertical positioning.

Even our necks are designed with a limited vertical range of motion and a much wider horizontal rotation. At any given moment we are turning our heads or bodies, scanning the horizontal auditory plane.  We enjoy things in stereo. Stereo loudspeakers spaced apart horizontally to maximize the effect. But have you ever wondered why stereo loudspeakers are not placed vertically?

In some apartments and houses it makes sense logistically, yet our ears find horizontally spaced sound sources pleasing and complex, while we have more difficulty discerning vertically spaced sources.  Is this true? Try it and listen.

Have you ever tried to stack a line array on its side? It’s quite interesting, and I’m confident that you’ll find that it typically offers less enjoyable sound.  Take a close look at the various offerings from manufacturers and you’ll find that, usually, there are fixed angles between boxes when horizontally arrayed. This minimizes overlaps in HF coverage and “seamlessly” merges the coverage patterns.  Hey, wait a minute… Isn’t that a zonal design approach? Exactly!

So here’s the deal, at least as I see it.  With current technology, it’s necessary to utilize multiple loudspeakers to cover large spaces, as no one makes a single loudspeaker that is loud enough, sounds great, and versatile enough to handle a wide range of venues/coverage areas.  These multiple loudspeakers need to be arranged in some sort of configuration that is horizontal, vertical, both, or even one behind the other.

Currently, we can get loudspeakers to sum together quite well - but not perfectly. We can also get them to zone together quite well - but not perfectly.  Our ears are very sensitive to those imperfections in the horizontal domain and considerably less sensitive to those same imperfections in the vertical domain.

Therefore, the true design advantage that line arrays posses is that they take advantage of the human deficiencies in vertical hearing by keeping their imperfections in the plane where we less likely to perceive them, presenting a low degree of component-to-component imperfections.

Combine this with the fact that they hang nicely, like a string of beads, and I venture to say that line arrays may just be a bit more than the latest fad.  As far as the question - “what’s the next big thing?” - well now, that is the million-dollar question, isn’t it?  My bet is that it will be a technology that better adapts the way music is presented with the way we hear it. Or, of course, it might just be something cheaper, smaller and more convenient with a sonic downside, like the MP3 format.