Helpful Advice for Before, During, and After the Show

1.    Prepare a killer setlist in advance. Work out your setlist before you arrive at the gig, and keep in mind that you want to pace it for maximum excitement throughout, and to finish with a flourish. For most musical styles, you want to start with something uptempo, and be careful of putting too many slow or medium tempo songs in a row (or too many songs in the same key). Make sure your first couple of songs are ones that everyone in the band is super confident playing, because even if you’ve soundchecked earlier, odds are that you’ll be struggling a little to adjust to the sound on stage, and don't want to simultaneously have to concentrate on remembering how to play a new song.

2.    Keep the setup tight. When you arrive at a venue that has a stage that’s larger than you normally play on, there’s a tendency to want to spread the band out and use that extra space. Be careful, because if you’re too spread apart, you’ll have trouble hearing each other the way you’re used to. Keep the setup relatively tight. 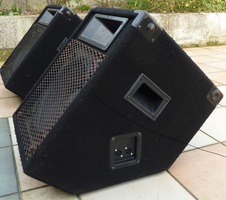 3.   Try to avoid maxing out the monitors during soundcheck. Whether you’re running the sound from stage or there is a sound person, leave some headroom in the monitors so that they can be turned up later when needed. If the vocalists are having trouble hearing themselves, turn the instruments down some rather than continually increasing the monitor level. If you've cranked up the monitors to the point of feedback, chances are that the band is too loud already.

4.    Have a stage plot/input list prepared in advance. If you’re playing a venue that has a sound person, it helps if you have a stage plot/input list prepared in advance to give to him or her prior to (or at the beginning of) your soundcheck. The stage plot shows where each band member sets up, and the input list shows all the mics and DI boxes your act requires. It will help move things along and the soundperson will be grateful. You don't need a stage plot with fancy graphics, you could draw it by hand as long as it's legible. If you want it to be more professional looking, you can find online resources or you can get StagePlot Pro, a Mac/Windows application that created the stage plot you see below. 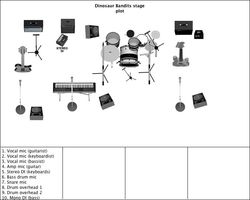 6.    Put any charts and lyrics in order before the show.  If you’re using charts or lyric sheets during the gig, arrange them to correspond to the order of the setlist beforehand to avoid delays between songs while you search through them for the right song. (See tip # 7.)

7.    Keep time between songs as short as possible. Long waits between songs can cause the audience to lose interest, and the less talking you do to each other "off mic" during the set the better. You might even want to prepare a few spots in the set where you’re transitioning directly from one song to the next without stopping.

8.    Avoid volume wars. Unfortunately, it’s very easy to get into an escalating cycle of volume increases that starts with one person turning up, and others turning up to compensate, and goes around and around from there. The end result is a stage volume that’s so loud that you'll have trouble hearing things correctly onstage, and that will be painfully loud out front.

9.    Look at the audience. Eye contact with the crowd will help win them over. If you’re all staring at your shoes, you’re much less likely to connect with the audience. It always helps for the front person to talk to the audience at least a few times during the set.

10. Be friendly and professional to other bands on the bill and the venue staff.  It’s important to present a courteous and professional attitude to everyone at the venue. Don’t run long on your set times or act like a diva with the sound person. What goes around comes around, and it will hurt your future opportunities if people think you're jerks. The venue won’t want you back, and you won't make connections with the other bands that could lead to future work.