Tips for Using the Oscilloscope When Mastering Music

An oscilloscope in the form of a plug-in will allow you to see the waveform of your signal in real time. "But my DAW already does that!," you say. Which is true, except for the fact that your DAW displays the waveform of your source audio file. That means that it does not take into consideration all the processing you've applied to the track. In fact, during mastering (and even during mixdown), the sound you hear probably don't have anything to do with the waveform your DAW displays, due to the plug-ins inserted into the tracks. So, rather than doing yet another rendering of your track with all the effects and then importing it back into your project to see the real waveform, you can use an oscilloscope in real time placed at the end of the insert chain. 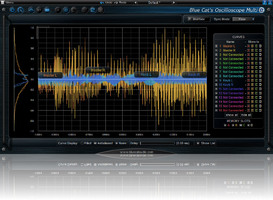 But, what is it good for? Quite simply, to see the impact of the processors applied on the waveform. If your ears don't have enough training to adequately recognize when a compressor is crushing the dynamics of a song, your eyes will certainly be able to spot the difference between a flat, brick-like waveform and another one with a nice landscape of peaks and valleys.

In terms of plug-ins, we can recommend the very affordable Schwa Schope and, especially, the superb Oscilloscope Multi from Blue Cat Audio, which, like many analysis plug-ins of the brand, lets you visualize several waveforms from different instances of the plug-in within one single window. That feature comes in handy to compare the waveform before and after a processor.

A history of perception

Throughout this series of articles dedicated to mastering at home, we have insisted several times on the importance of comparing the signals at the same level before and after applying any processing, in order to avoid the famous "louder is better" syndrome. Coincidentally, while we were writing these articles, MeterPlugs brought out a plug-in that simplifies this task. Perception is presented as two modules/plug-ins, one of which is placed at the beginning of the effects chain and the other at the end. In addition, it allows you to bypass your effects chain in a very transparent way, since it compensates the differences in perceived volume. Not bad, eh?

Granted, it doesn't do anything that couldn't be done manually and it's a bit expensive, but the flexibility and productivity enhancement it provides are, in our view, significant enough to be worth mentioning.

Stay tuned to Audiofanzine for the next installment in our mastering odyssey, which is coming to an end soon!