Multiply your creative processing with these multi-effects plug-ins

This month, I survey five multi-effects plug-ins that give you plenty of new territory to explore. All five are exceptionally versatile. They vary tremendously in price, but they’re all quite capable of handling your everyday effects needs and more. Each offers an original approach, and a few will take you as deep as you’re willing to go into the crazy, mixed up world of effects programming. All of them run on the Mac and Windows, all sync to tempo when needed, and all are available in most popular plug-in formats. As long as you know what you’re getting—and I’m about to tell you—you can’t go wrong with any of them. 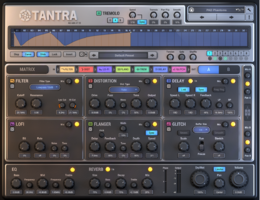 Tantra is a budget-conscious but extremely capable plug-in with plenty of interesting tricks up its sleeve. Because it has A and B layers, it functions as two identical multi-effects processors. You can route the two layers in series or parallel with mix levels for each. In addition to standards like distortion, flanging, reverb and 3-band EQ, you get lo-fi, which reduces the audio signal’s bit rate or sampling rate, and glitch, which chops the signal into short sections and replays them. Glitch parameters let you determine their length, stretch them, reverse them, freeze them and produce stutter effects. Twelve filter types include everything you’d expect, as well as vowel, pitch-shift and ring modulation filters. The single-tap delay has independent rates for each stereo half and a ping-pong option.

To complement Tantra’s useful assortment of effects, its most distinguishing feature is the Modulator section, which supplies eight 32-segment sequencers that generate control signals for modulating amplitude levels (tremolo), auto-panning (pan flip), and perhaps most important, whatever effects parameters you assign as a mod destination. You can specify each segment’s duration and value by clicking-and-dragging on it, and determine the sequence’s mod routing by clicking-and-dragging from a modulator to a destination. A separate window displays a matrix that also lets you route modulators to destinations and view all mod routings. All the segments in a sequence can be either a step or a curve. Selecting Curve lets you create envelopes with up to 64 breakpoints and stretch them across any number of segments. Choose preset patterns (including user-defined patterns) from a menu, or create semi-random patterns with the randomizer button.

Dry Piano: Here’s the original audio signal with no processing, a simple acoustic piano sound. Every example here starts with this clip.

LOFO Corrosive: Although this preset uses every effects type, glitch is the one that stands out the most.

FLT Liqueur: This preset also uses every effects type, this time focusing on bandpass filtering. Although every Tantra preset incorporates modulators, you can disable them if you prefer. 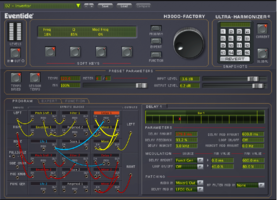 Introduced in 1986, the rackmount Eventide H3000 Ultra-Harmonizer immediately established itself as one of the most desirable effects processors ever invented. You can still find it in many top recording studios today. Focusing on stereo delay, reverb, filtering, pitch-shift and distortion, the H3000 offered lots of classic algorithms nothing else could touch. In 2010, Eventide introduced a software version with many of the original unit’s capabilities and algorithms, but notably lacking any reverb. H3000 Factory has been running native (without TDM hardware) on computers since 2012. Compared with its namesake hardware, one of the plug-in’s most useful features is that it can sync to changes in tempo and meter.

The H3000 Factory’s Program page displays a matrix of 18 effects blocks, all with audio inputs and outputs and some with modulation inputs, along with 7 input source blocks. You program effects by connecting blocks using onscreen patch cords, much as you would with a modular synthesizer, and specifying parameter values. To the right of the matrix you’ll see all the parameters, modulators and patch connections for any block you’ve selected, as well as a graphical beat grid for delay times and frequency plots for filters. Modulation is particularly flexible, especially with modulators controlling the parameters of other modulators. Two additional pages that you access with tabs display all parameters for all blocks. You can edit them using dropdown menus and numerical fields.

Admittedly, programming H3000 Factory can be a real head-scratcher until you’re thoroughly familiar with how it works. Nonetheless, its building-block approach encourages experimentation and allows you create spectacular effects that would be impossible with other plug-ins. Even if you never conquer its challenging user interface, it furnishes hundreds of fascinating presets that range from simple 2-part harmonies to complex and unearthly pitch-shifted echoes and beyond.

Special FX 12 Topography: If unusual effects are what you want, Eventide is happy to oblige. This is one of the tamer presets. 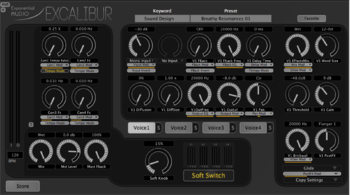 If you want a versatile effects processor that offers extreme signal-routing flexibility, take a look at Excalibur. Along with standard fare like distortion, delay, reverb, filters and various modulation effects (chorus, flanging, tremolo, ring mod, etc.), its effects palette includes pitch shift, bit reduction, resonators and a unique glide delay. Every preset gives you four possible signal paths, called voices, and you can assign a different effects algorithm to each voice. Excalibur’s extensive parameter set runs deep, but with well over 500 easily accessible presets to get you started, you can be up and running immediately.

Excalibur encompasses an I/O matrix and a modulation architecture that route audio and control signals to and from numerous points within its algorithms. Most parameters have a button to select and enable modulation from more than 75 sources that include audio signals, LFOs and front-panel controls. You can even modulate voices with other voices. Assign any modulator to control multiple parameters, too, making it easy to create user macros that produce radical shifts in timbre. Real-time displays in both the modulator windows and on the main panel show you exactly what each modulator is doing. With level displays for every input and output—the master I/O and all four voices, including pre- and post-effects levels—Excalibur also makes it easy to get a handle on gain staging.

Comprehending Excalibur’s myriad options isn’t quite as challenging as with H3000 Factory, but so many possibilities inevitably add up to a learning curve you may find daunting. Its well-organized user interface helps, however, and once you’ve made the effort to learn your way around, you’ll have an effects plug-in that doles out unprecedented degrees of customization and control.

Vintage Echo Flange 01 SM: Excalibur excels in its genuinely useful presets, like this one. 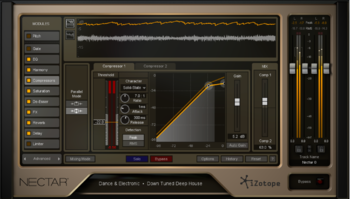 Nectar 2 is unlike most effects gear because it’s aimed squarely at processing vocal tracks. Nonetheless, it makes a dandy general-purpose multi-effects plug-in, too, for which you’ll find all kinds of uses. More than just first-rate reverb, delay, filtering, EQ, distortion, saturation and modulation effects, it has stuff you don’t see in many multi-effects plug-ins, like pitch correction, de-essing, gating, limiting, compression and four-part harmonization. Although the controls are always concise and straightforward, Nectar’s collection of algorithms and presets have enough depth to deliver the entire spectrum of effects that musicians, singers and recording engineers use most.

The overview displays the controls you’ll use most often for all effects simultaneously. Switch to the advanced view, and Nectar divides effects types into 11 modules. Each module has a dedicated control panel filled with knobs, sliders, buttons and useful visual feedback that includes spectrum analysis and waveform displays. You can enable as many or as few modules as you need and rearrange their order in the audio path.

The reverb module models the EMT 140 stereo plate reverb. The single-tap stereo delay emulates tape and analog hardware and has a digital delay mode, with LFO modulation and 3.5 seconds of delay time. The FX module has seven effects: distortion, decimate (sampling-rate reduction), phaser, flanger, chorus, echo, and shred, a stuttering effect that repeats short audio segments and lets you control the segment size and number of repetitions. The harmony module can add automatically harmonized accompaniment to a melody, using either the key you’ve selected or one that Nectar detects for you. You can also use a MIDI keyboard to play as many as a dozen harmony parts and individually adjust their levels, panning and delay parameters.

Nectar comes with almost 200 factory presets arranged by musical style. Although most of them are designed to enhance vocals, many are appropriate for sound design, instrumental tracks or entire mixes. With similar functionality to other multi-effects plug-ins and then some, Nectar 2 gives you everything you need to customize your own effects in an easy-to-use package. And if you spend $70 more, you can get Nectar 2 Production Suite, which also includes iZotope’s Pitch Editor and Breath Control plug-ins.

Rock 60s Faze: Many of Nectar’s vocal presets are useful on instrument tracks.

Special FX Crystalized Whispers: Nectar can take sounds pretty far out there, too. 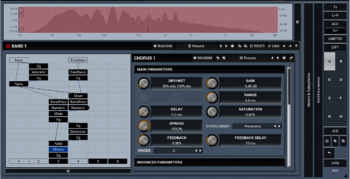 MeldaProduction is a Czech software developer offering dozens of high-quality effects plug-ins. The company’s expansive plug-in MXXX (or as ancient Romans might have called it, 1,030) has all the functionality of most audio processors you’ve seen and quite a few you probably haven’t. More than just a single plug-in, though, it is a modular framework hosting all of MeldaProduction’s other plug-ins, which are included, but in a form that you can only run in MXXX. Think of it as both a multi-effects processor and an effects construction kit with innumerable possibilities. With MXXX, you can assemble complex combinations of algorithms and then save and recall them as a single preset.

MXXX has two distinct user modes, Easy and Edit. Easy displays the preset browser, macro controls for the current preset, and level meters for audio ins and outs. Edit mode displays a routing matrix with 96 slots arranged in 6 lanes. Each slot can host one effects plug-in, adding up to whatever group of effects you need. Multiband support lets you divide the audio signal into as many as six frequency bands and assign separate configurations of effects, each of which will affect only frequencies within the selected band. Alongside the matrix are all the controls for whatever plug-in you’ve selected, including access to its individual presets. Additional controls access 16 versatile modulators, an arpeggiator, and 26 user-definable macros called MultiParameters. As you can probably tell, this thing is deep. In addition to MXXX’s 139-page manual, you’ll want to download manuals for all the plug-ins you’ll be using.

The range of MXXX’s processing prowess is nothing short of astounding. Just the spectral processor category alone comprises pitch correction, ring modulation, vibrato, frequency shifting, intelligent harmonization, unison doubling, vocoding and sound morphing, as well as harmonic transformation, poly-saturation and character. And don’t get me started on delay, distortion, dynamics, EQs, filters, reverb, signal generation, and utility functions like analyzers and an oscilloscope. MXXX is so comprehensive that, short of a virtual instrument, there’s not much you use other audio plug-ins for that it can’t handle on its own. It isn’t cheap, but once you’ve tried it, you may be using it a lot.

Geary Yelton is Electronic Musician’s former senior editor and has been writing for EM continually since 1985. He authored two editions of The Rock Synthesizer Manual, wrote the first book on producing music with the Mac and served as staff synthesist for three major Atlanta recording studios. Currently, he's a freelance writer and consultant for the Bob Moog Foundation and lives in Asheville, North Carolina, where he’s preparing for the First Continuum Fingerboard Festival on June 9–11, 2016.