It was only last February that iSolo met its goal on Indiegogo, when they reached $18,650. By then, the Taiwanese team behind the product had raised 101% of the funds it was asking from its backers, reaching its first milestone. The iSolo is basically a system to amplify your acoustic guitar. It comes in three different kits, including up to three different and complementary devices. Let's dig deeper into the details 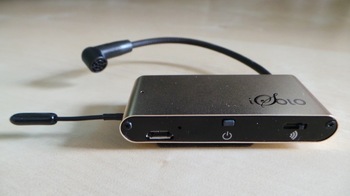 First and foremost, the iSolo is a mic-transmitter. It's actually a tiny but rather elegant box with a gooseneck microphone coupled to a small antenna to transmit the signal wirelessly. You only need to attach the box, with the help of an adhesive system (the so-called "magic carpet"), on the guitar top and point the mic towards the soundhole to capture the sound of the instrument. The gooseneck can be flexed in different directions and adapts to whatever shape you need. The main advantage of the system is that you can modify the sound by placing the gooseneck (and mic) in different positions: Closer or farther away form the soundhole or the strings, pointing to the highs or the lows, etc. The gooseneck seems quite sturdy and capable of withstanding the test of time. But I wouldn't say the same about the small antenna, which on the other hand doesn't have to be manipulated that much. The box also features a button to power it on/off and a three-way gain switch. Last but not least, it features a micro-USB port to recharge it (and comes with a USB cable). 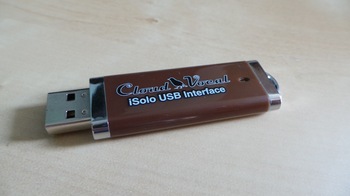 The second device in the pack is a USB receiver. Conceived exclusively for recording, it's a simple USB key for wireless pairing with the transmitter. Plugging it into a computer you can record the sound from the iSolo directly onto it with a DAW or any other software.

The third unit is a receiver for live applications featuring a big antenna and eight channels to connect wirelessly to the transmitter. Plus it has a jack output to allow you to plug into a PA system and use it onstage with you, as well as a volume knob and a high-pass filter. 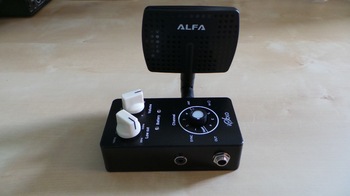 The kit comes nicely packaged, nothing too luxurious, but functional and aesthetically pleasing. I was however impressed by the amount of accessories included. A small transport bag for the mic-transmitter, a USB cable to recharge it, a regular 9V PSU and a USB version to charge the Live receiver. Without reaching the (much more pricey) quality of Apple products, the iSolo seems to be clearly inspired by the ecosystem created by the Cupertino-based company. Also in the package are two spare magic carpets for the transmitter and a small clip to have another option to attach it to your instrument. 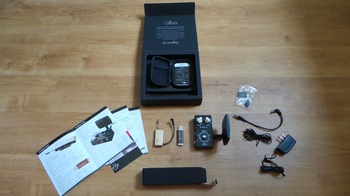 Now that I mention it, let's talk about this for a moment. The "magic carpet" is very effective: It sticks very easily to the guitar and despite attaching and removing it several times it remains perfectly functional, without leaving any trace on the instrument. For those who would rather leave the top of the guitar untouched, you can use the included clip instead. In this case you need to place it on the edge of the soundhole and hang it from there. The installation is a bit more tedious than with the magic carpet, but it's only a matter of seconds and the mic remains stably in place.

The user manual is in English and standard Mandarin (the official language in China and Taiwan), just in case you want to practice your Chinese. Anyway, the iSolo is really easy to use and you should be able to use it instinctively. And the diagrams are clear enough for anyone who has some basic idea of audio to make sense of them. 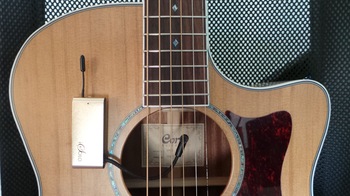 Paring the transmitter and any of the receivers is very easy and quick: You only need to put both devices close to one another, press briefly the transmitter's pairing button and that's it. You can't pair both receivers at the same time, so you'll have to choose one of them. We started with the USB receiver.

The USB key was recognized as an audio device right away by my computer. After having paired the mic and receiver I couldn't wait to start recording with my DAW: Studio One Prime. Tough luck, the software didn't recognize the USB device, even though the computer did. I then tried with Garage Band and everything worked fine. It's not the first time I've had this issue with Studio One, which makes me think it might have to do with the software rather than with the iSolo. So, the audio clips you'll hear later on were recorded with Garage Band. I used a Cort Grand Regal acoustic-electric guitar, the GA5F-BW model to be more specific.

For the following clips I focused mainly on the influence that the placement of the mic around the soundhole has. In the first example I placed the mic pretty close to the strings, with the mic pointing towards them. In the second example the mic was in the same position but pointing this time towards the tail of the guitar. For the third clip I again pointed the mic towards the strings but with the mic placed near the tail of the guitar.

To finish the test with the USB receiver, I modified the gain on the transmitter. In the first clip, the gain is set to minimum, then set to mid and, finally to maximum for the third clip.

The sound produced by the iSolo depends a lot on the position of the mic and its orientation. Once you've found the right spot, the sound is pretty convincing, despite a certain lack of brilliance. Noise is non-existent, even with the gain set to max, which is much appreciated. I must also say that I didn't adapt my playing to the gain level, which explains the distortion on some of the clips. Also note how the rubbing of my hand and arm on the body of the guitar, pick attacks, etc. are easily picked up. The guitar player will definitely have to adapt his/her playing to get the best results or play more naturally being aware of the "hazards" of guitar playing. Furthermore, the mic picks up a lot of background noise, so you will have to be in a quiet environment to get clean recordings (in the examples you can easily hear me rubbing or unintentionally hitting the body of the guitar). Noteworthy is the fact that there is no latency. The wireless connection works perfectly up to 21 ft away or so. Beyond that you start getting some dropouts which become unacceptable at 30 ft.

Now let's see how the Live receiver does. I took the opportunity to compare three different recordings: the sound captured by the iSolo, the sound of the Cort's built-in electronics, and the sound captured with a Neumann U87. We recorded all three at the same time, everything going into a Universal Audio Apollo 8. Below you can hear the results.

It's night and day between the iSolo and the Cort's piezo. The iSolo kicks the Cort's butt. On the other hand, compared to the U87, the iSolo doesn't come out that good. The lack of brilliance I had noted before was more obvious this time around. The performance of the U87 was clearly better, but we are talking about a $2500 mic here, and the price difference doesn't really correspond to the difference in terms of sound quality. The iSolo is in this sense great value for money.

Let's listen now to the high-pass filter on the Live receiver. In the next clip it's set to minimum (30 Hz), then 100 Hz, then 200 Hz, 300 Hz, and in the end I go back to the minimum, for the sake of comparison. You can clearly here my body rubbing against the guitar when I'm moving the switch.

The HPF does what it should and might prove very useful during soundcheck. Regarding the wireless connection, there are four "near" and four "far" channels. This means you can connect several iSolo mic-transmitters. The first four channels are meant to work up to 15 ft away, while the rest can reach up to 30 ft. These distances stated by the manufacturer are spot-on. The "near" mode works perfectly up to 15 ft, but beyond that you will start having some dropouts, although nothing too serious until you reach 30 ft. In "far" mode I experienced no dropouts up to 30 ft away. This mode is very effective, but it comes with a price: the latency of the near mode is 12 ms while in far mode it's 20 ms. I did actually notice some latency during the test. Taking this into account, I can really see the near mode working for live gigs, but not so the far mode. I also fear that the sensitivity of the mic could produce untimely feedbacks. It needs to be tested further. 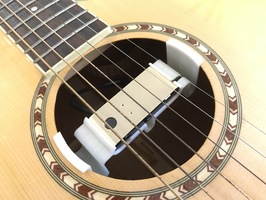 The iSolo is a good product with two very clear pros: its wireless connectivity and the possibility to place the mic any way you want. Plus, all three devices are well-designed and easy to use. For instance, an LED on the Live receiver indicates the battery level of the mic-transmitter. All the accessories included are very welcome, especially considering that the iSolo is meant to evolve with additional gadgets. In fact, some new tools are in the making to place the transmitter in the center of the soundhole, like a classic mic for acoustic guitar, for instance. Also note that the iSolo is available for violin, too, with a slightly different microphone built directly into the transmitter. The team behind it also plans to introduce different versions for other acoustic instruments.

I really love the fact that the iSolo can be adapted to different platforms: computer, PA system, and even a smartphone (iOS or Android) with the USB receiver and a USB adapter (the only thing not included!). When it comes to the sound, it's pretty convincing without being dazzling. It can't really stand up to a quality mic. You must also pay attention to the unavoidable rubbing and background noise. But considering the many features it has to offer, I think the iSolo is overall a great product. It sounds good enough and you can make lots of things with it. The only thing left to discuss now is the price.

The recording kit for $199 is very interesting. You'll have a hard time finding anything as good at this price point, and you definitely get your money's worth. But you won't be able to play live... An experienced musician will surely prefer a traditional recording mic, but that means you also need a good soundcard, a good preamp, etc. The iSolo will easily fit the bill of guitarists starting out or who don't want to invest a lot of money. The kit for $299 is a more significant investment but also a more versatile one: It will allow you to play live gigs and record with an additional soundcard. The sound is exactly the same but the possibilities grow. All in all I think this kit is also a good option. Finally, the "Live and recording" kit is aimed at a more limited target: musicians who record and do live gigs but don't have a soundcard or who wish to record themselves quickly and wirelessly. Its price ($349) is not excessive compared to the other kits but it's already a significant sum of money that could be invested in other products that probably do much less, but better.

In the end, this first review of a crowdfunded project turned out to be a pleasant surprise. Despite some defects, the iSolo is quite appealing and original. If you are in the market for anything of the sort it ought to easily satisfy your needs. I give it 4 out of 5 stars.