Review of the Electro-Harmonix B9

Of HOGs and POGs

According to Electro-Harmonix, the B9 uses digital tone generation that's related to what EHX used in its HOG and POG pedals. A company spokesperson says that many artists were using those pedals to emulate organ sounds, so the B9 was created to make it easier.

Of the four knobs across the top, the first two are output controls that impact Organ, one of the 1/4" outputs on the left side of the pedal: Dry controls the guitar level through the Organ output, and Organ governs the organ sound levels through it.

Above the Organ output is a second output called Dry, which only emits guitar sound, and has no volume control. It’s a bit counter-intuitive, as one’s natural assumption is that the Dry knob controls the Dry output and the Organ knob the Organ output. It is spelled out in the printed manual, but if you haven't read it yet, it's perplexing. 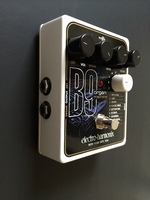 The B9 sports two parameter knobs : Mod affects the speed of the modulation effect on the organs. Click is a key click effect, which, according to Electro-Harmonix, is designed to emulate the key click on “classic Be and C3 organs.” It’s designed to trigger when a note is played and not re-trigger that note until it stops or falls below an amplitude threshold. On certain emulations, the Click knob controls a different parameter. For example, on Cathedral, the church organ sound, it controls the depth of a tremolo effect.

Underneath the four knobs is an ivory-colored 9-way selector knob for dialing in the particular organ emulation you want to use. Finally, there’s a buffered bypass switch.

The 1/4” input jack is on the right, the opposite side of the pedal from the aforementioned 1/4” outputs. On the back is the jack for the included 9V, 200mA adapter. The pedal doesn't run on batteries.

The B9 offers a good variety of different organ sounds including Jazz, Gospel and Classic Rock. Cathedral is a church organ sound; Bell an organ/electric piano hybrid; and Fat and Full adds in an extra octave below and above. Continental gives you a Vox Continental emulation. The modulation effect is vibrato and the Click controls depth on this one.

I tried the pedal in line with other guitar effects like distortion and compression — both before and after the organ — and I especially liked the way compression smoothed out the B9, which can sound a little harsh at times.

I discovered that the B9's sounds are not all based in the same octave, so depending on which sound you switch to, the same note on your guitar might trigger might sound in a different octave after you switch presets. Perhaps there's a reason why Electro-Harmonix did that, but I found it disconcerting, and would have preferred all patches to be based around the same octave (with the exception of "Bottom End," which generates a bassy sound that's down an octave). Some sounds trigger layered notes that are an octave above, below, or both (in the case of "Fat & Full"), which is cool. 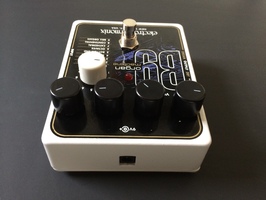 The sounds are generally quite convincing. The first time I plugged it in, I felt almost as if I’d been transported behind a B3 rig. Naturally, since guitar and organ playing are very different, you do have to adjust your style accordingly and do more organ-like riffs and chords if you want authenticity. Even then, you’ll be hampered by the guitar’s lack of sustain, compared to an organ, which sustains infinitely when a key is held down. Still, that’s not the B9’s fault, and any guitar-based organ emulation will face these issues.

Here’s an example of the Jazz organ sound, recorded along with a bass and rhythm guitar part (note that all the B9 sound examples in this review have reverb and a little bit of compression added to them after they were recorded):

Since B9 functions like a guitar synth, in that it’s triggering notes, rather than just processing your guitar sound, the tracking is a relevant issue. I found that the organ lagged a little behind the guitar notes, although it was more noticeable on some presets than on others. This latency is a tad disconcerting, although not enough to throw off your playing.

For an example of the latency, here’s the Fast & Full preset (which adds an octave above and below the note), with the guitar coming out of the Dry output and panned to one side, and the organ sound panned to the other. You can hear that the guitar is a tiny bit ahead.

Here are some more sound examples, starting with the Bell Organ sound, which Electro-Harmonix describes as sounding like “if you crossed an electric piano with an organ.”

I liked it as a jazzy solo sound, and thought it was also reminiscent of vibes.

The Cathedral sound is a pipe organ emulation. For this sound, what you play is critical to authenticity. Here’s my attempt at it.

Finally, since Electro-Harmonix touts the B9 as something you can use with a keyboard, as well, I tried it with an electric piano sound. First you'll hear the piano sound, and then I play the same part with the B9 switched in and try two different organ sounds.

Compared to the guitar, the dynamics of the triggering were very uneven.

At ($220) the B9 is not an inexpensive pedal, but considering you’re getting nine different organ emulations in a single stompbox, it’s not overpriced. If you’ve been looking to play organ-style guitar parts for live performance or for recording, you’ll find the B9 to be a cool addition to your pedal board.