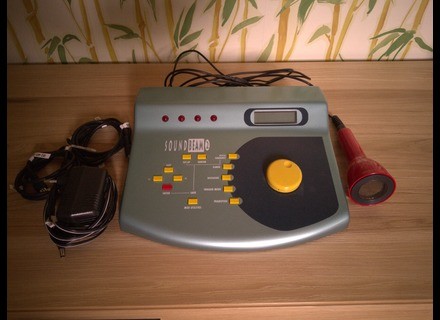 an expandable MIDI keyboard invisible in space.     It emits a 'beam' of ultrasonic impulses, like a bat - too high for us to hear,     listens to the 'echoes' of any interruption in the beam and converts them - as well as their variable
distance between the sensor and the speed of movement in the beam -     in MIDI instructions for playing electronic musical instruments.

The Soundbeam2 is not in itself a musical instrument - it’s an alternative way of playing any MIDI controllable instrument.
The SB2 is more than just a simple controller, it is a unique and extremely versatile performance instrument which translates any physical movement into MIDI controller messages. Although there will be comparisons with made the Theremin and the Roland D-Beam the SB2 uses sonar technology, an entirely different technique to either of the above that allows performers to accurately play musical phrases without physical contact.

The award winning Soundbeam concept may be unfamiliar to many, but it first saw the light of day in 1989. The Soundbeam 2 (and its earlier incarnation the original Soundbeam) was designed by Robin Wood and the EMS team (yes, they of VCS3 fame) for Edward and Judy Williams of the Soundbeam Project and so far it has primarily been used in special schools and in conjunction with children and adults with disabilities or restricted physical movement.

At the same time, Soundbeam 2 opens new imaginative horizons for professional users already experienced in MIDI technology: composers, choreograpgers, musicians and dancers who can explore the greatly enhanced creative and expression capabilities of this MIDI controller and performance instrument. Of course, whatever your interests - dance and movement, therapy or just music - remember that Soundbeam is one of the very few ways to play a musical instrument that allows people of different levels of dexterity and physical ability to play together as equal musicians.

For the technically minded the SB2 is a distance-to-volatge-to MIDI device and works its magic by firing off a constant stream of directional 50 kHz ultrasonic tone-bursts, and simultaneously listening for their echoes. In different reverberant environments and rooms these tone-bursts decay at different rates and the Soundbeam 2 Controller measures the variations and translates them into MIDI information in real-time.

The SB2 Controller is capable of controlling up to four beams and twelve switches or variable controllers simultaneously (via the optional 8-input Switchbox). These can be used to activate and control any MIDI compatible device via note and controller data.
Each beam (or control source) can be programmed to respond to almost any MIDI controller message including velocity and note values and a beam can be programmed to trigger up to 64 individual note pitches over its entire length (up to 6 metres), forming a keyboard-controller in space.

A typical Soundbeam set-up would consist of an SB2 Kit plus a MIDI sound module and speakers. And although not essential, a separate MIDI keyboard could be included for entering chords or pitch sequences into the User Set-Ups, though this can be achieved using the Controller.Sales of SB2 have so far been mainly for education and special schools. With such a unique and versatile concept, Soundbeam also deserves to reach a wider audience and users who are not only interested in MIDI and technology, but who will find new and unusual applications. Part of the attraction of SB2 is that it transcends borders, forcing static musicians to become animated performers while allowing dancers and performers waving their arms to become seemingly virtuous musicians.

As I mentioned the SB2 Sensors use inaudible 50 kHz ultrasonic beams (to humans anyway) and using a technique known as tone-burst they fire the beams into a room or space and measure the returning echoes. The drawback with this method is that the Sensors emit an audible buzz, a bit like mains hum only sharper sounding. Unfortunately there is no mention of this phenomenon in the manual and when I first used the SB2 I was worried the Sensors may have been faulty, but a quick call to Robin Wood at EMS belayed my fears.

Up to 4 Sensors
Up to 8 switches, or variable controllers.
30 Preset Set-Ups
97 User Set-Ups

Video to get an idea:

View all images on No Name Soundbeam 2

Warning
The prices quoted in the private classified ads on Audiofanzine are not necessarily the actual retail prices.
The classified ads that include options or are part of a pack are not taken into account.
A selling ad at $880

Other categories in MIDI Controllers