All the more since the simulation quality has dramatically increased, even if it's surprising to see that some pioneer products are still very successful, especially the first SansAmp. Now, as if by magic, a hungry newcomer just appeared in this wild jungle. It is committed to lay down the law and beat all competitors. Let me introduce you to the magic preamp, the gear that simulates your own amps and even more, the Kemper Profiling Amplifier! With such a name you feel like in a third-rate science fiction movie, and it's nearly true... I know, it's hard to get excited when you hear for the umpteenth time that you can "just throw your all-tube amps away because here comes the solution to your problems: all your amps in a single, universal magic box that can do everything...". But forget about the past: a little bird told me that this product is really valuable, that it could revolutionize modeling concepts and that it will be a crazy source of inspiration for the most creative people among us... 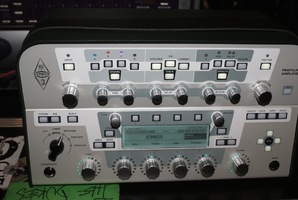 ... a small but extremely appealing unit. And this is the first highlight for people who use public transportation like me: the cardboard box containing the product is very light. It may seem like a small detail, but it does count, especially if you take into account that Kemper's goal is to put all your old and modern amps (and more) into a single box that you can take anywhere with you to use with every single setup! In this regard, Kemper didn't forget a thing: they also added an optional transport bag that recalls the bag of an Orange Tiny Terror, and an optional amplifier module to change the Profiling Amplifier into a real all-round amplifier head.

It's time to open Pandora's box and... surprise! The beast looks pretty nice (a mix of an old tube radio receiver and the control panel of a jet) even if it doesn't feel very rock'n'roll, if you know what I mean. A good thing is the leather handle: it's a simple feature but it gives the electronic box a classy style. The manufacturing quality is very good. Germans are famous for that and people at Kemper are no exception. Turning the controls and checking out the connections you get the impression that the unit is quite sturdy in spite of its very light weight.

So, now it's time to power on the device and start checking out the control interface. Honestly, if you have used this kind of product before, you shouldn't have a problem browsing the presets (yes, Kemper packed presets into the product) and edit them. The interface is not the most friendly, fun or colorful (simple display, no pictograms), but you'll quickly find what you're looking for: each button is assigned to the function described by its name; everything is quite practical if you think logically. Just read the short (but nice!) user's manual and you'll master every feature. First of all, let's check out the presets of a product that seems to be just a competitor of the Eleven Rack (for example): to that effect I connected the master out to a Neve channel strip and sent the preamp signal directly into Pro Tools.

The Beast is Awake! 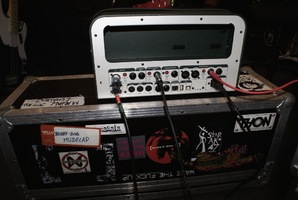 The first part of the review went well: the sound quality matches modern standards. You can control effects easily and effectively via a pre-amp loop called "stomp" and a post-amp loop called "effects". The effect quality is good, and the "Police of Good Taste" will only visit you if you don't use them properly! I like especially the fuzz effects (see sound sample #7)! You get a rich set of original parameters to control the "amp". For instance, you have the possibility to adjust the attack of the pick (an interesting special effect), the brightness (gives more definition to the sound without decreasing the amount of gain — amazing), the bias (aging of the "virtual tubes"), an EQ (which you won't use a lot because the flat response sounds great), the type of speaker cabinet, and a "high or low shift" control that affects the brightness of the signal (this probably simulates the sound when captured by an off-axis microphone). Do note that the "character" control affecting the sound of the speaker cabinet requires the user to be careful, unless you want it to sound like a wild beast rather than a guitar amp!

When it comes to effects, you get a standard set: overdrive, flanger, phaser, rotary, fuzz, delay, reverb, compression. In short, very classic things! The overall effect quality is pretty good although the sound has an obvious "digital signature" with that slight high-frequency boost that is always annoying. Although some people actually like it, and compared to similar product, the Kemper does a good job!

But I know you like weird things, so let's come back to the heart of the unit. The main asset of the product is its capability to capture the sound and the soul of your favorite amps. This means that whenever you go on tour, you need to take only the avatar of your amps with you and you can leave your precious and heavy jewels under their satin covers in your studio/room/cellar/shed at the far end of your garden...

First surprise: the process is dead easy. Hats off to the designers who really worked with users in mind. Less than one minute was enough to "clone" the sound of an amp! How does it actually work? Just connect the direct out to the input of your amp using a standard instrument cable. Then, place a microphone in front of the speaker and connect it to the "return" input of the Kemper. Press the dedicated button and go:

Believe it or not, it works amazingly! I "profiled" five different amps (a '71 Fender Bassman 50, a Marshall JCM 800 customized by VHM, an Orange Tiny Terror, and some strange things like a Zvex Nano Head). Every time, the result was jaw-dropping in terms of sound character, even if it did show a slightly more narrow dynamic response. Check out the sound samples by ourself. The process includes two different steps: first, the Kemper feeds the amp with different signals (to get to know it before devouring its soul!). Afterwards, you have the possibility to play your guitar (still directly connected to the Kemper that feeds your amp) to fine-tune the sound. This second step, called "refine", is quite important (see the sound samples of the Fender mini-amp profiled with or without "refine") and it helps you improve the richness of the sound in the low-frequency range. By the way, you'll probably notice that the Kemper has more trouble faithfully reproducing the sound of very special amps like the Zvex Nano Head, but we won't hold this against it. The best thing is that you'll quickly start coming up with more creative applications. For instance, I tried to capture the room ambiance instead of close-miking the speaker (I chose a condenser mic and missed a +48V phantom power for the XLR input of the Kemper). And you know what?... It works too! Knowing this, you can easily imagine the craziest things! 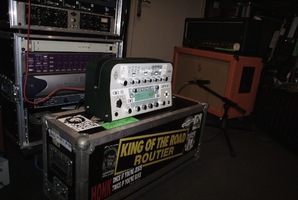 The only problem is that the process for storing the "amp profiles" you create this way is a bit cumbersome. Maybe upcoming updates will make this process faster and easier. You can enter and store every information about the amp profile: model, year and brand of the amp, microphone, profile name, etc. You must know that Kemper plans to create an online profiler community where members will be able to share amp models for free. For example, John from NYC will have the possibility to use the '72 Traynor Master Reverb model owned by Markus in Germany... This seems like a neat idea but only time will tell if users follow the concept. The main problem is that the user has to use a specially formatted USB key to transfer the models to his computer, update the firmware, etc. Why isn't it possible to connect the Kemper directly to the computer with a standard USB cable? The solution chosen by Kemper is definitely from an ancient time (even if not that far away), but I guess there are many technical reasons why Kemper chose this solution.

People who know me also know that I'm a living paradox when it comes to amp simulations. My heart tells me that the endless charm and poetry of a real good amp, vintage or not, with its imperfections and intrinsic tone richness are worth the few technical disadvantages of analog gear. On the other hand, the strong scientific background I got from my family taught me to value technical progress, because only innovation can bring the human brain to new creative dimensions. And here is my personal opinion: Kemper has done an amazing job! The profiling process works really good and you can create very special sounds depending on your application and your imagination (you can can model an old radio receiver, an ambiance mic, etc.). However, I won't sell my amps overnight — a copy will always remain a copy! That being said, huge congratulations to the team that designed this product: it blew me away! And the price is quite reasonable considering all the innovations it entails. Hats off!