Introduction to voice leading and voicings

Voice leading is actually a concept taken from jazz but is inherited from counterpoint, since the idea is to layer different melodic lines without thinking in terms of chords. Yes, I know I've said before that we will look into counterpoint soon and we will, I promise! 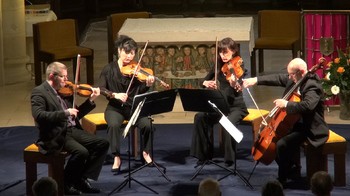 To really grasp what we are talking about here it's important to reconsider the nature of the chords themselves. And that a chord is made up of... several individual notes! Really? Well yes, but apart from this obviousness, it is important to consider that, as you saw in the previous articles, the individual notes of a chord are directly related to the individual notes of the chords that surround it. This is specially evident in the suspension article when we introduced the concepts of preparatory notes and chords, attraction and resolution.

The individual notes of the chords constitute voices that evolve to eventually resolve on one another, creating a melodic line in the high end or a bass line at the bottom, for instance. And voice leading has precisely to do with that: harmonizing in such a way that the voices are as coherent as possible..

But back to the chords. Once you get pass the idea that they are fix entities and become aware that they are more like groups of individual notes, you can really start playing with them and the notes that constitute them. You can obviously invert and enrich them or even take some of their notes out, all with the aim of making voice leading work better. And the chords that result from this choice of specific constructions become "voicings.".

This brief – although not very detailed I know – introduction was needed to establish the foundations of what we'll see next. I promise we'll put all of this into more concrete terms in the next article, so stay tuned!